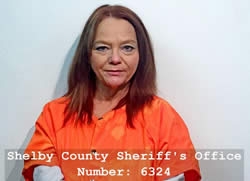 Cordova was originally arrested and charged with murder; however, she pleaded guilty to a lesser charge of manslaughter, 2nd degree felony, and as a result was sentenced to 10 years confinement in the TDCJ Correctional Institutions Division. Cordova received a total jail time credit of 18 days.

When Cordova was arrested in 2017, according to a report from the Shelby County Sheriff's Department, she stated to officers her husband Michael Lane Cordova, 52, had kicked her out of bed when she grabbed a knife and stabbed it in her husband's direction multiple times in the dark bedroom.

Upon arrival, officers indicated Michael Cordova had multiple stab wounds to his body and Margie Anderson, Justice of the Peace Precinct 3, was called to the scene and pronounced him deceased. Karren Price, 123rd District Attorney, provided some background details on what led to the final outcome of the case against Cordova which has spanned several years and two district attorneys..

"Ms. Cordova plead guilty in 2019 and the Court accepted the plea and the recommendation made by then District Attorney Shires and defense counsel, Tibiletti, and agreed to follow their plea agreement," said Price. "The sentencing was reset at that time due to an already scheduled surgery on the defendant’s shoulder. Shortly thereafter Covid hit and no Court of any kind occurred. I then scheduled it for sentencing and we concluded the case on Monday. This is a case I would have liked a longer prison time on personally but was bound to the prior plea agreement."