October 24, 2021 - Though he has never been a resident of Shelby County, Timpson Area Genealogical and Heritage Society member Charles Johnson's family has deep roots here, having arrived before 1850, and he has been researching county history for years. An event of particular interest to Johnson is the lynching of Joe Shields in 1892. “I first became really interested in the Shields case because in my genealogical research, I kept coming across mention of my second great-grandfather, Jesse Harris, being in jail in Center, charged with this lynching.” 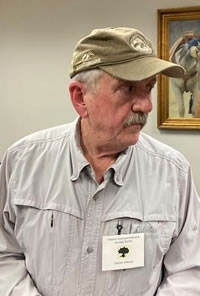 Charles Johnson is the author of the recently published book A Lynching in Shelby County. “I first began my research into the Shields murder in 1996,” Johnson said. “The book primarily concerns Jesse Harris and his nephew, Billy Harris, and other members of the community and their involvement, if any, in the lynching which took place in Shelby County in 1892. It covers events transpiring before, during, and after, the lynching." Continuing, Johnson revealed, “In my research, I have found that I uncovered more about the bad deeds of individuals than the good ones. I encountered one exception to that in researching some of my Tennessee ancestors. The wife's obituary contained glowing praise for her good works and service to her church but her husband's obituary said only that he was a 'good blacksmith'.”

“One of the most important things I have learned in my research is that things were completely different back then and it is usually a mistake to compare current events with those of the past. Few of the things we rely on for entertainment existed in the late nineteenth century so people had to entertain themselves,” Johnson shared. “Socials and singings were frequently held, mostly in the winter.” Shelby County did not have road maintenance crews in those days and members of the community were responsible for keeping the roads passable according to Johnson. “They were paid by a reduction in their property taxes,” he said. “There were no automobiles or paved roads and most people traveled on horseback or on a mule. Most people were too poor to be able to afford a buggy. It took so long to arrive at a destination that it was common to spend the night there before returning and men frequently had to share a bed. No one thought anything about it,” Johnson revealed. 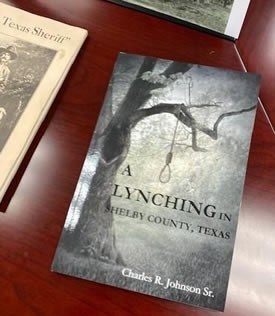 “In the early 1870's, Jesse Harris was married with a family and living in Tennessee. He was known to have a bad temper and got into an argument with another man out in a field. The other man drew a pistol and shot Harris two times in the chest, but because his pistol was improperly loaded, the bullets only bruised Harris. Harris then drew his pistol and killed his assailant,” Johnson related. “Since there were no witnesses and Harris was known for his bad temper, he feared that he would be convicted of murder, so he fled to East Texas, leaving his family behind in Tennessee. He arrived in Shelby County in 1878 and went to work for Nancy Pinson, who lived near Pinson Creek, north of Huber. Mrs. Pinson had an eighteen-year-old daughter, with whom Johnson's great-grandfather had an affair. Over the next couple of years Miss Pinson bore two children by Harris, who divorced his wife in Tennessee and married Miss Pinson. After only about a year and a half of marriage, the second Mrs. Harris died, leading to efforts by Jesse Harris to re-establish a relationship with his former wife. Harris re-married his first wife and, although Mrs. Pinson had become fond of Harris, this soured their relationship and created hostility between the Harris and Pinson families,” continued Johnson.

“Four years prior to Jesse Harris's arrival in Shelby County, Mrs. Pinson's son Joseph had been involved in a shootout with Mark Powdrill, a local man, who was killed. To avoid a possible murder charge, Powdrill fled to Alabama,” Johnson told. “In Alabama, Joseph Pinson met and married a woman named Shields, the sister of Joe Shields. After Jesse Harris's departure, Mrs. Pinson needed help running her place and her son Joseph, unable to return home, convinced Joe Shields to go to work for his mother in East Texas.” According to Mr. Johnson, Shields began establishing a bad reputation in Shelby County soon after his arrival through his involvement in gossiping, failure to repay debts, horse theft, and swindling. Thus, there was no shortage of people in Shelby County who disliked Joe Shields.

“On the night of January 28, 1892, soon after his arrival home at the Pinson place and putting up his mule, Joe Shields was waylaid by at least three men, knocked unconscious, and dragged down the road and out into the woods, where a rope was tied around his neck and he was hoisted up on the limb of a red oak tree. Mrs. Pinson had heard Shields cry out and gone outside to investigate, where she was told by Shields' assailants to go back inside or be killed. She attempted to enlist other residents of the community in looking for Shields later than night but no one would. It was after daybreak the next morning that his body was discovered hanging from the tree,” Johnson related.

“Based upon Mrs. Pinson's account of the events of the previous night, four men were arrested that day. She said she heard Shields cry out “Harris is killing me!" and that she recognized the voice of another assailant as that of Charlie Petty, a former employee of hers. She did not mention Billy Harris or Jim Stanton but Jesse Harris, Charlie Petty, Billy Harris, and Jim Stanton were arrested for the crime. Jesse Harris was granted a change of venue and transferred to San Augustine County, where he spent about eighteen months in jail before being tried and acquitted. The other three were tried in Center, convicted, and sentenced to life in prison, though two were later pardoned,” said Johnson.

Joe Shields was buried in an unmarked grave in the Buena Vista Cemetery but recently Mr. Johnson and his wife researched the location of the grave and received permission to place a headstone on it at their own expense. Mr. Johnson had a number of copies of his book available for purchase and several TAGHS members did so.