June 20, 2022 - Debra Pantalion, who describes herself as an “unapologetically enthusiastic genealogist” is a member of both the Daughters of the American Revolution and the Daughters of the Republic of Texas. In addition, she is a direct descendant of Don Antonio Gil Y'Barbo, who is credited with establishing Nacogdoches. Speaking to the June monthly meeting of the Timpson Area Genealogical and Heritage Society, Pantalion shared some of her family history as well as tips on qualifying for the DAR and the DRT. 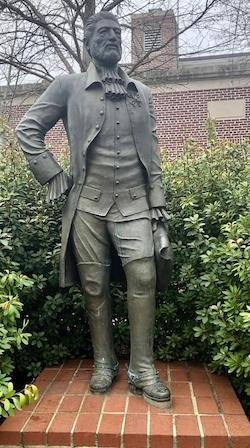 “I am obsessed with genealogy,” began Mrs. Pantalion. “My sister tells me I live in the past and that's okay! I travel extensively in search of that little piece of paper that will add to my knowledge of the past and when I find it, it's a hallelujah moment!” Although she was born in Louisiana and currently lives in Austin, as a direct descendant of Gil Y'Barbo, Pantalion has deep roots in Nacogdoches. Although. Like Mrs. Pantalion, he was born in Louisiana, Y'Barbo came to Nacogdoches in 1779 as the Lieutenant Governor and was responsible for construction of what became known as The Old Stone Fort. Additionally, the Pantalion family moved to Nacogdoches in the nineteenth century. 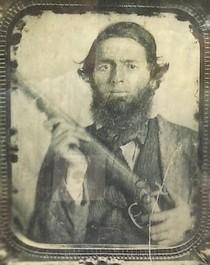 Mrs. Pantalion revealed that while her ancestor Joseph Pantalion of Nacogdoches was serving in the Civil War, he heard that a dear friend of his was being held in the Nacogdoches jail. Joseph took leave from the Confederate Army and returned to Nacogdoches, where he visited his friend in jail. During the visit, Joseph was able to secure possession of the key to the cell where his friend was being held. He then made a mold of the key by pressing it between two bars of soap. He took the bars of soap to Shreveport where he had a key made from the impression. Returning to Nacogdoches, Joseph used to key to free his friend from jail, after which he returned to his Confederate regiment. A copy of that key is now on loan to the Stone Fort Museum. Records of the incident establish that Joseph's friend was the great-great grandfather of the infamous Clyde Barrow!

“Many people believe that an applicant must research their line all the way back to the American Revolution or the Texas Revolution in order to qualify for membership in the DAR or DRT,” Pantalion continued. “That isn't true. All you have to do is prove your line to someone who is a member and you can then use their research for your proof as well. For example, if your mother is in the DAR or DRT, all you have to do is prove that she is your mother. The same is true for the Sons of the American Revolution and rthe Sons of the Republic of Texas. Your research might also be used to qualify for other historical organizations, such as Daughters of the War of 1812 and Colonial Dames.”

“The registrars of these organizations can also be very helpful. They want new members and are willing to provide assistance to persons trying to qualify. They have access to information that no one else has. If someone in your family is a member you can use their proof. However, in my case, no one in my family had ever been a member of the DAR and I had to prove my line all the way back to the American Revolution, which was difficult. There is a chapter of the DRT in Center and one in Nacogdoches which meet monthly,” Pantalion continued. She handed out information on the DRT and its objectives to those in attendance.

“Family Search is a valuable online resource in genealogical research and TAGHS has it available for your use on the computers in the Genealogy Library,” Pantalion confirmed. “It is run by the Church of Latter Day Saints and it has a wealth of information. There is an LDS Family Seach Center in Lufkin and if you go there, they will sit down at the computer with you and help you find what you're looking for. They will even e-mail you if they find addition information for your research later. I was very impressed! When you are on Family Search, be sure to look at the Images section. There are not just photographs, but photocopies of thousands of pages of records, as well. I was overwhelmed the first time I looked at the images. I founds birth records, death records, marriage records...everything!”

“I also subscribe to Ancestry.com, which is not free, but did you know that you can give yourself a gift certificate to Ancestry, if you are a member” Pantalion revealed. “Every year when my subscription is up for renewal it goes on sale and you can give a gift certificate. I called them and asked if I could do that and they said 'Sure'! You can save yourself some money doing that!”

“Being a member of the Daughters of the Republic of Texas is a great honor. Far fewer people qualify for the DRT than the DAR. You have to place your ancestor in Texas between 1836 and 1845. That is a pretty narrow window,” Pantalion concluded.