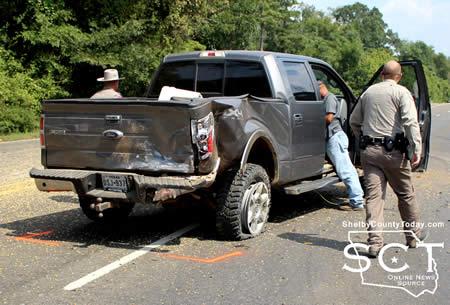 When emergency personnel arrived one vehicle remained in the middle of the roadway while another was in some trees with the driver trapped inside.

According to Texas Department of Public Safety State Trooper Jesse Fountain, at 3:08pm troopers were dispatched to a major two-vehicle crash on SH 87 in front of Double J's BBQ.

A grey 2014 Ford pickup truck driven by Justin Dale Wagstaff, 45, of Shelbyville was traveling north when stopped preparing to turn left into the parking lot of Double J's. 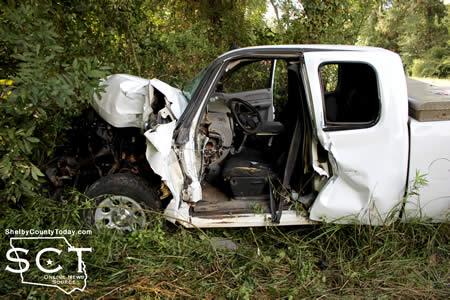 At that time a white 2009 Chevrolet pickup truck driven by Ivan Perez, 17, of Center was also northbound in the same traffic lane when he failed to control speed and collided with the rear of the grey Ford pickup truck causing it to spin around.

The Chevrolet continued off the roadway to the left and into some trees where it came to rest. 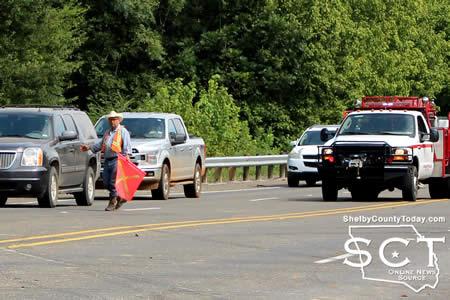 Jamie Hagler, Constable Precinct 2, requested the Center Fire Department since Jaws-of-Life were needed and they are the closest fire department with the equipment. The firemen were able to help extricate Perez from the Chevrolet using Jaws-of-Life. Shelbyville Volunteer Fire Department assisted with traffic control at the scene until it was clear.

Perez was transported by ambulance to Nacogdoches Medical Center - Shelby Emergency Department for treatment of his injuries. Wagstaff went by private vehicle to the emergency room as a precaution.

Perez will be issued a citation for failure to control speed. 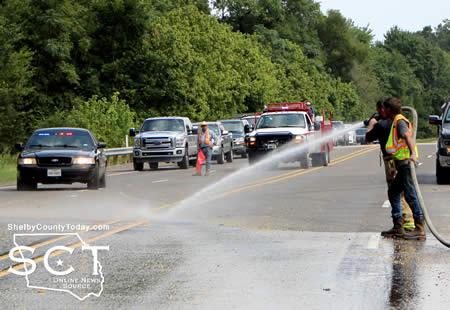