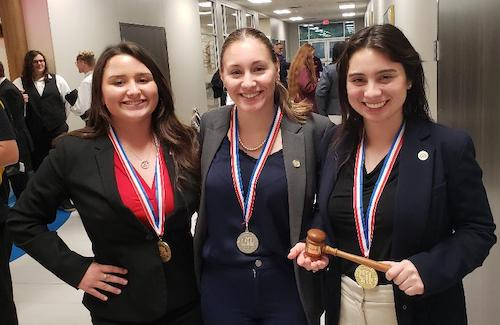 The U.I.L. website describes the competition as, "An individual contest in a large group setting. It models the legislative process of democracy, specifically, the United States Congress. Within this mock legislative assembly competition, contestants draft legislation (proposed laws and position statements) submitted to the tournament, and they research the docket of bills and resolutions dealing with real-world social and political policies prior to the contest to prepare their speeches. At the tournament, students caucus in committees, deliver formal discourse on the merits and disadvantages of each piece of legislation and vote to pass or defeat the measures they have examined. Parliamentary procedure forms structure for the discourse, and students extemporaneously respond to others’ arguments over the course of a session."

Maddie placed 4th as a freshman and is an alternate to the state competition, Aubree Camp placed 2nd, qualifying for state, and Ava Silva was awarded regional champion and outstanding presiding officer.

The state competition will be held in Austin on January 4-5.

The students and coaches would like to thank Center United Pentecostal Church for hosting over 100 students for the competition. We are Dragon Proud! Good Luck at State! The Shelbyville Speech and debate team is coached by Emily Sowell.