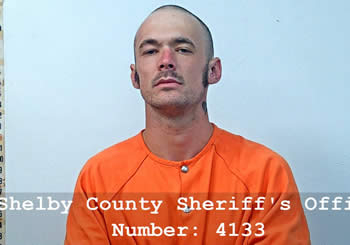 Also booked into the Shelby County Jail on November 14, 2022 by the Shelby County Sheriff's Department were Allen Price, 26 of Joaquin, and Teresa Louviere, 51 of Sour Lake, Texas. Both had charges of Tamper/Fabricate Physical Evidence with Intent Impair Human Corpse.

Update 11:50am - Shelby County Sheriff Kevin W. Windham reports the arrest of Ethan Myers, 26, of Joaquin, in connection with a homicide investigation.

On Sunday, November 13, 2022 at approximately 4 p.m. deputies responded to a welfare check on County Road 3625 in Joaquin. Upon entering the residence, deputies discovered the body of Sarah Hopson, 36, of Joaquin.

Myers was arrested for resisting arrest and booked into the Shelby County Jail. This investigation is ongoing and more charges are expected. Further information will be released at a later time.

November 14, 2022 - Shelby County Sheriff Kevin Windham confirms an incident in the Joaquin area where a woman was discovered to have lost her life due to an apparent violent act.

Deputies responded to the Sand Isle Community on Sunday, November 13, 2022, around 4pm on CR 3625 for a welfare check on Sara Hopson, 36, of Joaquin discovered her body.

Multiple agencies, including the use of helicopter support, responded to the scene and assisted the Shelby County Sheriff's Department in locating the suspect Ethan Myers, 26, of Joaquin who was later taken into custody.

Further details from the Sheriff's Department are pending at this time.