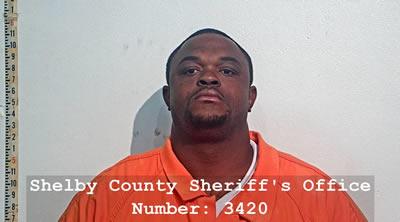 On February 18, 2020 at approximately 5 p.m., Deputy Josh Tipton with the Shelby County Sheriff’s Office initiated a traffic stop on Highway 59 in Timpson for a vehicle safety inspection. The vehicle turned onto Church Street and accelerated in an obvious attempt to flee. The vehicle came to a stop and the driver exited the vehicle. Tipton immediately recognized the driver a Tyquwon Bussey, 25, of Timpson.

Bussey continued on foot toward a trail in a wooded area. He was observed knocking on the door of a residence in an attempt to get in the house. As Tipton approached, Bussey again started to flee but was subsequently taken into custody.

Once in custody, Bussey was found to be in possession of marijuana in a bag he was carrying. While searching the vehicle, a substance believed to be methamphetamine was located. A field test positively identified the substance as methamphetamine.

Bussey was charged with Possession of a Controlled Substance (F-2) Possession of Marijuana (M-A) and Evading Arrest or Detention (SJF). Bussey posted bonds totaling $32,500 and was released February 19.