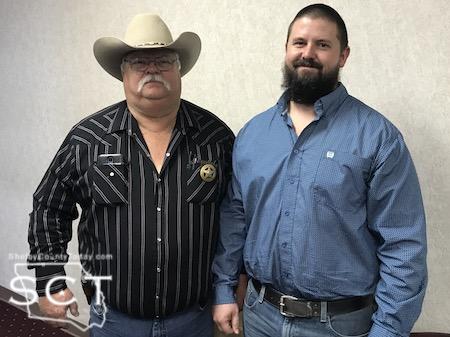 The letter read as follows: "Given the opportunity to serve the position of Precinct 4 Constable, I am honored, I would love to protect our people and make them safe. My desire is for the people of precinct 4 to find a capable person. My body will no longer allow me to work, so I am obliged to resign immediately. Bryan Gray."

Charles Barr, Commissioner Precinct 3, initially spoke to those who attended to offer their services.

"I'd like to say that we do appreciate Mr. Burkhalter coming up and offering his services in a time that we was in need," said Barr.

McSwain further explained Smith has prior experience working with Texas Department of Public Safety and he is qualified.

Tom Bellmyer, Commissioner Precinct 4, remarked there were several qualified individuals who stepped forward to offer themselves to assist the county in filling the position.

"Other than Mr. Smith, everyone lived outside the precinct, but it was pretty fulfilling for the idea that people would come up and volunteer to help the county in a situation that we're in, and I appreciate that," said Bellmyer.

A motion then carried to appoint Sean Smith Constable Precinct 4.

Following his appointment, Judge Harbison administered the oath of office to Sean Smith for the position of Precinct 4 Constable.

Constable Smith previously was with the United States Coast Guard for six years and Texas Department of Public Safety for four years.