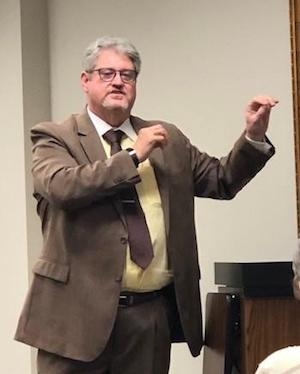 February 21, 2022 - “Sam Houston is one of those people that we Texans have made larger than life. Without Sam Houston, Texas history would be very different, but he was human and had a lot of human foibles,” said Dr. Scott Sosbee of the SFASU History Department and Executive Director of the East Texas Historical Association in his opening remarks to the February meeting of the Timpson Area Genealogical and Heritage Society. “Houston was a great man. He was a winner. He was successful in almost every thing he did. He rose to great heights from a fairly hardscrabble background. He only lost one election in his life. He became Governor of Tennessee and a close friend of Andrew Jackson, who was grooming him for the Presidency of the United States. He was the hero of the Battle of San Jacinto and later the first President of the Republic of Texas. Unfortunately for Houston, his success did not continue with his love life”, Sosbee revealed. 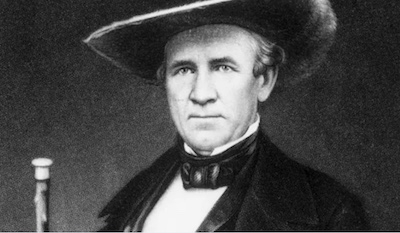 “Houston had been engaged to be married twice some years before he was elected Governor of Tennessee and each of the women had broken it off. Being a single man was a significant political liability in the 1830s, so, probably with the help of Andrew Jackson, an arrangement was reached between Houston and the Allens, one of Tennessee's most prominent families for him to marry their nineteen-year-old daughter Eliza. Houston was thirty-five but tall and handsome and Eliza agreed to the marriage,” Sosebee told. “The marriage lasted only four weeks however, and Eliza left the Governor's Mansion and returned to her family home in Sumner County. No event in Sam Houston's life has been more clouded by speculation and myth than the failure of his first marriage. The true reason Eliza left is not known, though there are a number of theories, the most probable is that she was in love with someone else, closer to her own age,” Sosbee continued.

“Houston refused to reveal the reason for Eliza's departure but soon thereafter, much to Jackson's displeasure, he resigned as Governor and left the state for Arkansas, where he lived among the Cherokee, with whom he had established a good relationship in Tennessee. During the time he lived with the Cherokee he established a romantic relationship with a Cherokee woman which may or may not have been a marriage, depending upon one's cultural perspective,” Sosbee said. “It is important to remember at this point that Houston and Eliza had never gotten a formal divorce and were still legally married. If he had been married to the Cherokee woman he would have been guilty of bigamy. In 1832 he left the Cherokee and his 'consort' and traveled to Washington D.C. to meet with President Jackson.” Sosebee revealed, “Houston left the White House with a commission from the President ostensibly to treat with the Comanches in Texas to prevent raiding along the border with the United States. Since Houston's relationship was with the Cherokee, not the Comanche, and raiding had not been a problem, the true purpose for sending Houston to Texas was more clandestine.”

Houston arrived in Nacogdoches in late 1832 and established a law practice. In 1833 Henry Raguet and his family arrived from Cincinnati and established a successful dry goods store on the city square. They were friends with Adolphus Sterne, who had helped finance Mr. Raguet's store, as was Sam Houston and Houston soon became acquainted with Sterne... and his eldest daughter, Anna. “Anna was universally described as a stunning beauty and was courted by all of the city's most elite young bachelors. She must have been quite the catch. Forty-year-old Sam Houston became one of the suitors for fourteen-year-old Anna's hand. Their age difference was significant, even in those days, but Henry encouraged his daughter to develop an interest in the distinguished and financially secure Houston,” Sosebee said. Houston seems to have been enchanted by Anna, as is evidenced by his surviving love letters to her. “He wrote her some of the sappiest love letters that you have ever read! When he was away, he wrote her telling her how much he missed her and described her smile as lighting up the sky and calling her his Venus,” chuckled Sosebee.

“There was one really big problem with Houston's pursuit of Anna: he was still married to Eliza. Texas was still part of Mexico and divorce was illegal under Mexican law, so even if he were granted a divorce in the United States, it wouldn't have been recognized in Mexico and he would be guilty of bigamy if he re-married,” Sosebee explained. “Maybe this is why he so vehemently supported Texas independence! If Texas were no longer under Mexican law, he could divorce Eliza and marry Anna. We know that Houston led the army that secured Texas independence and one of his first acts as President of Texas was to appoint a judge in San Augustine County by the name of Shelby Corzine, whose first official act was to grant Sam Houston's petition for divorce from Eliza,” continued Sosebee.

“You know, historians are always looking for that diamond, that lost historical document that they can say 'Look at this'! Copies of the decree granting Houston's divorce from his first wife existed, but no one had ever found the original document. An archivist named Ainsworth was digging through a box of old papers at the East Texas Research Center at SFA several years ago and down in the bottom he found a folded document. Further examination revealed it to be Houston's original divorce decree! I wanted us to keep it in Nacogdoches but we dutifully shipped it to the Sam Houston Memorial Museum in Huntsville,” lamented Sosebee.

“Back to Houston and Anna Raguet, the now eighteen-year-old Anna was less enthusiastic about the now forty-three-year-old Houston's attention to her. In addition, Houston was now living in the Capitol of Texas instead of Nacogdoches, and had to continue his courtship of Anna by written correspondence.

These letters were entrusted to no less than the new Secretary of State of Texas, Robert Irion. Irion made several trips from the city of Houston to Nacogdoches every month to deliver these letters to Anna,” said Sosebee. “As Anna's affection for Houston waned, her affection for Irion grew and she finally sent a letter to Houston by way of Irion saying that she was in love with Irion and therefore would not consider any more proposals from Houston. Houston seems to have taken this news better than one might expect and even gave his blessing to the marriage of Irion and Anna Raguet, which took place in Nacogdoches in 1840.”

“Later that year on a trip to Mobile, Alabama, Houston met the daughter of a plantation owner named Margaret Lee and they were married shortly thereafter. Houston was forty-seven and Margaret was nineteen. Their marriage was a long and apparently successful one, producing a number of children. Although Houston regarded Nacogdoches as his Texas home, Margaret didn't like the city and refused to live there after Houston had left public office. They eventually settled in Huntsville, where Houston lived out his remaining years,” Sosebee explained. “Margaret claimed that she didn't like the weather in Nacogdoches but considering the similarity of the weather in Huntsville, perhaps she just didn't want to live in the place where Sam had loved Anna Raguet,” concluded Sosebee.