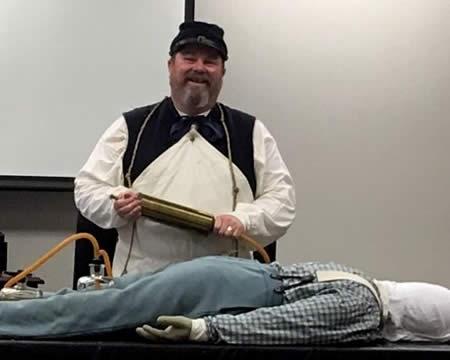 Mr. Doyle said that he had always been interested in history but became involved in Civil War reenactment when he answered a casting call for the somewhat historically inaccurate film “Abraham Lincoln: Vampire Hunter”. He is now a member of the Sons of Confederate Veterans and usually portrays an infantryman, although he has begun portraying an embalming surgeon. 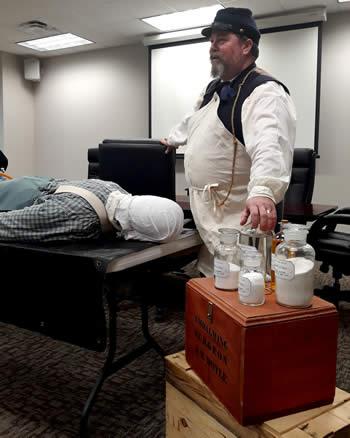 Modern embalming had its origins about 1850 but the chemicals used were so toxic that many of the morticians who used them became ill and died themselves, Doyle revealed. With the outbreak of the Civil War and the transportation of tens of thousands of unpreserved bodies of dead soldiers home for burial, the critical need for some method to prevent their decomposition became obvious, he said. Dr. Thomas Holmes of New York solved the problem.

In 1861 Union Col. Elmer Ellsworth, a friend of President Lincoln, was slain while removing a Confederate flag from the roof of a hotel in Alexandria, Virginia. Lincoln asked Dr. Holmes to create a solution to embalm Col. Ellsworth's body and Ellsworth became a national hero. Dr. Holmes was given a commission as an officer in the U.S. Army to continue the embalming of dead Union soldiers. Soon others began the practice commercially, with the cost being about $100 for an officer and $50 for an enlisted man, Doyle shared. Abuses were common, leading General Grant to order that all embalming surgeons would have to be licensed by the Army. The practice of embalming continued after the end of the war, the beginning of the modern funeral service industry, Doyle revealed. 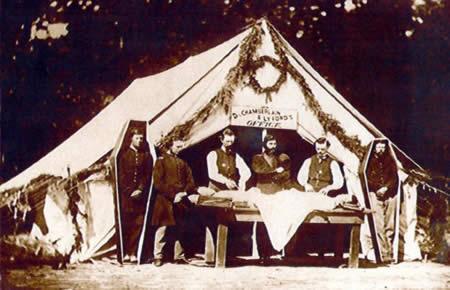 The Timpson Area Genealogical and Heritage Society meets at 2pm on the third Wednesday of each month in the Meeting Room of the Timpson Public Library, located on the corner of Austin and Bremond Streets in Timpson. The public is invited. The TAGHS Genealogy Library is located inside the Timpson Public Library and is staffed by TAGHS volunteers who are available to assist those doing research. The phone number is 936-254-2966.