June 19, 2020 - “At 11:30, the first tornado hit Alto. As we were making plans to evacuate our site, we saw another storm front approaching. The tornado that hit us was in that storm.” recalls Anthony Souther, the Site Manager of Caddo Mounds State Historic Site, which is six miles west of Alto on Texas Highway 21. It couldn't have happened at a worse time. On Saturday, April 13, 2019 the State Historic Site was hosting a Caddo Culture Day, which included members of the Caddo Tribe who had traveled from Oklahoma to participate in the program. After minutes of terror and destruction from an EF-3 tornado, tree trunks stood stripped of their branches, vehicles were overturned and scattered about the property, the site lay in ruins, and a number of people were critically injured, including one who later died. 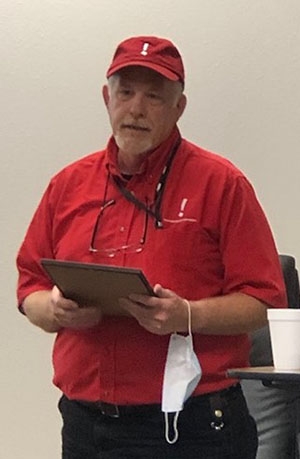 Members and guests of the Timpson Area Genealogical and Heritage Society were held spellbound as Mr. Souther relived the event at their monthly meeting on June 17. A retired twenty-year Air Force veteran, Mr. Souther said “I was trying to get into the museum classroom to warn those inside to take cover but the wind was pushing against the door so hard I was afraid it would slam closed on my arm and break it. About that time I was spun around and thrown to the floor where I just tried to protect myself from flying debris. I can now say I have heard “the train!" His wife was sheltered from falling masonry by a folding table. “After the storm passed, my military training kicked in and I went into Air Base Recovery mode. We began attending to the injured and clearing the access road and an area for the Life Flight helicopters to land.” 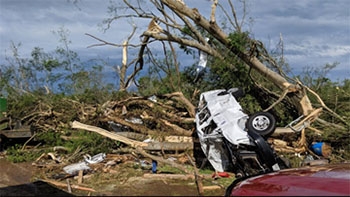 Although Caddo Mounds is only six miles from Alto, it took three hours for crews to clear that stretch of Highway 21 so ambulances could arrive. Life Flight was prevented from flying in because of poor visibility. When the last tree was removed from the roadway, a convoy of five ambulances pulled into the site. Soon thereafter, the sky cleared enough for Life Flight helicopters to land, with six aircraft eventually arriving for the six persons with critical injuries. The one fatality died en route to the hospital aboard one of the helicopters.
On Monday morning, the daunting task of clearing debris and assessing the damage began. The museum was destroyed and many of the artifacts lost. The Caddo grass house, whose construction under the supervision of a Caddo elder three years earlier had been the subject of a documentary film, was gone. All but one of the interpretive signs were gone. Trees were down. Demolished automobiles and debris from buildings littered the property. The wind had even sucked up the fabric weed barrier from beneath the gravel pathways. Still standing however, as they had been for 700 years, were the Caddo Mounds themselves. 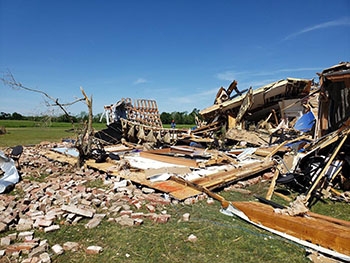 “If you're going to have your museum or business destroyed by a tornado, do it while the state legislature is in session," joked Mr. Souther. “They appropriated money for the facility to be rebuilt and we are in that process now. Architects have put together plans for what the new museum will look like. We re-opened in January with a temporary Visitor's Center but had to close again because of Covid-19. We are open again, though. We allow five or ten people at most to visit at one time and require masks indoors but not outside on the grounds,” Souther revealed. “There is no way we would be where we are now if not for the help of our wonderful volunteers, especially the Friends of Caddo Mounds and the East Texas Chapter of Master Naturalists.”

Plans are to make the Caddo Mounds Historical Site even better than it was before the tornado, reveals Mr. Souther. The new museum will not be a replica of the old one and will feature a number of improvements, including making it wind resistant and “hardening” the office and restroom areas as storm shelters. Although the funds appropriated by the legislature are sufficient to cover the museum's reconstruction, it is hoped that money can be raised to add an Educational Activities Building, and the Texas Historical Commission has approved fund-raising projects by Caddo Mounds.
The re-construction of the Caddo grass house is a unique situation, however. As mentioned, the house which was destroyed was less than four years old and was built under the supervision of Caddo Elder Phil Cross, using authentic local materials and construction techniques. That must be done again. Arrangements are being made for Mr. Cross as well as other Caddo Tribe members to be on-site to supervise the construction. Basically, pine trees will be bent together to form a hemispherical frame to which will be attached willow lath. This structure will then be covered with native switchgrass. Finding enough switchgrass presented a problem during the construction but it is believed that a sufficient supply has been arranged.
Caddo Mounds hosts a Summer Teacher Workshop each year and they were able to have it a few weeks ago. “It became sort of healing celebration for us and the community. Many survivors of the tornado, Alto citizens, volunteers, and about twenty members of the Caddo Tribe participated. Survivors marked the place where they were when the storm hit.” A cedar tree was planted as a memorial. Mr. Souther noted that Snake Woman's Interpretive Garden not only survived the tornado but actually flourished afterward. That is a good metaphor for Caddo Mounds Historical Site as well.
The Timpson Area Genealogical and Heritage Society meets at 2pm on the third Wednesday of each month in the Meeting Room of the Timpson Public Library, located on the corner of Austin and Bremond Streets in Timpson. The public is invited. The TAGHS Genealogy Library is located inside the Timpson Public Library and is staffed by TAGHS volunteers who are available to assist those doing research. The phone number is (936) 254-2966. 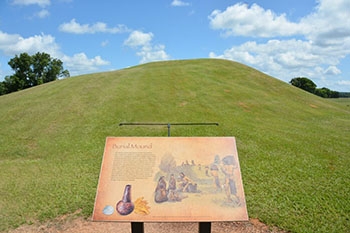