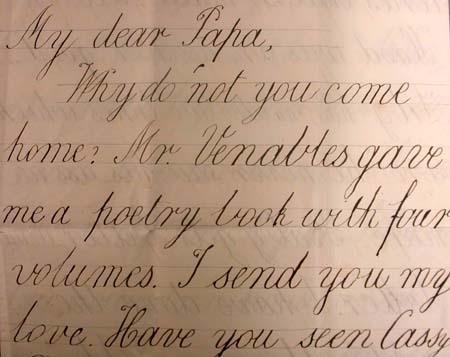 May 21, 2021 - To the dismay of many, cursive handwriting is rarely taught to elementary school students these days, ensuring a future in which few will be able to read it. However, even those of us who were taught and use cursive handwriting are sometimes befuddled when trying to read old documents which were written with pen and ink in the ornate script of the 19th century and earlier. Speaking at the May meeting of the Timpson Area Genealogical and Heritage Society, Marynell Bryant, current chair of the Texas Heritage Certificate Program of the Texas State Genealogical Society, shared examples of old script and tips on how to decipher it.

Bryant revealed that, in addition to being written in a style of handwriting which is unfamiliar to the 21st century researcher, the penmanship of the scribes varied widely, with some much more difficult to read than others. The education and literacy of the writers varied widely as well. As Bryant shared “For example, the early census takers weren't paid very much and sometimes they were just sort of dragged off the street and given the job”. This frequent lack of education is reflected in the penmanship and spelling of the record taker. She also noted that the often haphazard preservation of the old records has led to physical deterioration of the handwriting due to wear, insects, and water.

The way certain letters were written in the past has changed and, then as now, there was no real uniformity between scribes. Some formed their letters very ornately while others simply printed them. “D's, H's, W's, and G's present especial difficulty. I's and J's were sometimes almost indistinguishable”, Bryant shared. “The best way to determine what a letter is is to find a word that you know that uses that letter and identify how the writer formed the letter in that word. For example, the capital “J” in “James”.”

Some names and words were abbreviated in ways that are no longer common, Bryant said. The use of “Geo.” for “George”, “Wm.” for “William”, and “”Jno” for “John” or “Jonathan” were frequently used. “Thos.” for “Thomas” and “Jos.” for “Joseph” were also standard. The now universal two-letter Postal Service state name abbreviations did not exist. She illustrated how “Tennessee” was abbreviated as “Tenn”, “Arkansas” as “Ark.”, “Pennsylvania” as “Penn.”, and “Massachusetts” as “Mass.”. Personal signatures are especially difficult, she added.

“When reading a sentence, read slowly and make sure it makes sense. If it doesn't, you are probably misreading it. Don't make assumptions,” Brant warned. A good magnifying glass or a high-resolution photocopy enlargement are often helpful tools. “If you are having trouble with a letter or word, try to find where it is used again elsewhere in the document. Identify common phrases found in deeds and wills”. As she previously mentioned, misspelling is always a problem. “Words were often misspelled, especially personal or place names. Think of possibilities for the way the name or word could be spelled. Sometimes they are even spelled differently in the same document”! In any case, the researcher should transcribe the document exactly as it is written, misspellings and all.

At the close of her presentation, Mrs. Bryant announced that it was test time! She projected two old handwritten documents onto the screen in front of the room and challenged TAGHS members to use the tips she had shared to decipher them. Members were successful, to a greater or lesser degree, but the signature at the bottom of one document was virtually illegible. 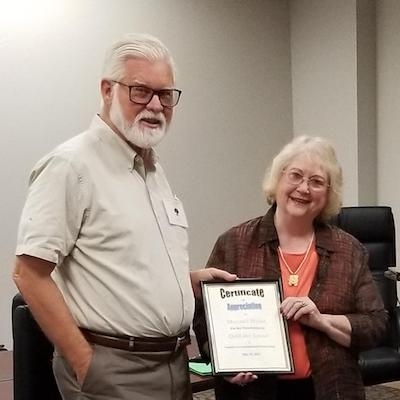 This was the first monthly meeting for TAGHS since meetings were suspended last year due to COVID-19 concerns and the Society plans to continue with them. The Timpson Area Genealogical Society meets at 2PM on the third Wednesday of each month in the meeting room of the Timpson Public Library on the corner of Austin and Bremond Streets in downtown Timpson. The TAGHS library is located within the Timpson Public Library and is open and staffed from 9AM until 5PM weekdays. Telephone 936-254- 2966 and ask for the Genealogical Library.