“Texas continues to experience tremendous economic and population growth across our state, and the GLO is working with local leaders to protect our communities against natural disasters such as flooding," said Commissioner Bush. "The GLO was provided with historic funding to help communities fortify critical infrastructure in preparation for flooding events. This $135 million in vital mitigation funds awarded by the GLO will provide essential protection for residents, businesses, and local government infrastructure."

The GLO received a historic $4.3 billion allocation in Community Development Block Grant Mitigation (CDBG-MIT) funds from the U.S. Department of Housing and Urban Development (HUD) to mitigate against future damage from hurricanes, flooding and other natural disasters in repetitively damaged areas. Within the $2.3 billion set aside for regional mitigation awards, $147,680,760 was allocated to the 2016 Floods State Mitigation Competition, with 50% going to the HUD- and state-designated Most Impacted and Distressed (MID) areas. HUD requires at least 50% of the total $4.3 billion must be spent on activities benefiting low- to moderate-income (LMI) populations. Of the 504,428 residents benefiting from the announced grants, 284,196 – or more than 56% – are low- to moderate-income.

For the 2016 Floods Competition, the GLO received 35 applications representing a total request of $244,674,464 for $147,680,760 in available funding. The grantees announced represent the highest scoring applications meeting program eligibility requirements based on the 2016 Floods State Mitigation Competition Applicant Scoring and Eligibility Competition Criteria and the CDBG-MIT Action Plan. The remaining funds allocated to these two competitions will be announced as the competition continues through the eligibility process. 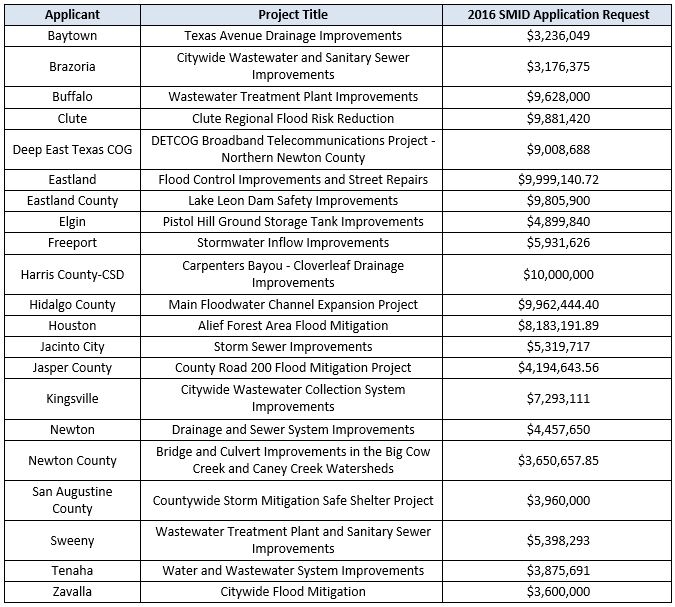 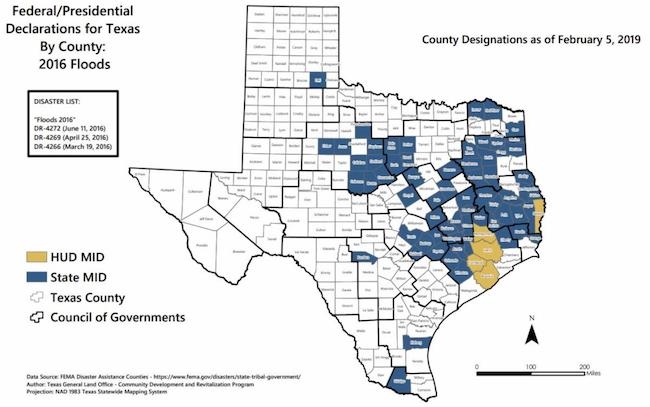 “Every day the GLO is working to cut red-tape and move much-needed federal recovery dollars to communities to improve infrastructure, mitigate against future flooding events, and protect both the homes and lives of Texans,” said Commissioner Bush.

Announcements for the first round of the Hurricane Harvey Mitigation Competition is expected to be announced in late spring or early summer. The GLO received 220 extensive applications totaling more than $5 billion in requests for the $1 billion in available funding (Round 1).

In May 2020, Commissioner George P. Bush announced the kick-off of the application process for the first round of more than $2.3 billion for mitigation projects to protect Texas communities hit by Hurricane Harvey and severe flooding in 2015 and 2016.

During the first round, the GLO is conducting three (3) competitive application programs from the CDBG-MIT Action Plan (see eligibility maps below). HUD-MID and state-MID areas each received half of the program’s allocation. Those programs include:

Applications closed for the first round of funding October 28, 2020, and the GLO is currently evaluating all applications in accordance with the HUD approved scoring criteria. Eligible applications with the highest scores will be announced as finalized.

For the 2015 and 2016 Floods State Mitigation Competitions, each separate competition will provide funds to cities, counties, Indian Tribes, and councils of governments (COG) to address risks in the 2015 and 2016 Floods HUD and State MID areas. Examples of projects include flood control and drainage improvements, infrastructure improvements, green infrastructure, public facilities, and buyouts. Each proposed project must have a total proposed cost between $3 million to $10 million.

The Hurricane Harvey State Mitigation Competition will fund mitigation projects for Hurricane Harvey HUD- and state-designated Most Impacted and Distressed (MID) areas. The competition is open to cities, counties, COGs, state entities, and special purpose districts. Examples of projects include flood control and drainage improvements, infrastructure improvements, green infrastructure, public facilities, and buyouts. Each proposed project must have a total proposed cost between $3 million to $100 million.

HUD defines mitigation as activities that increase resilience to disasters and reduce or eliminate the long-term risk of loss of life, injury, damage to and loss of property, and suffering and hardship, by lessening the impact of future disasters.