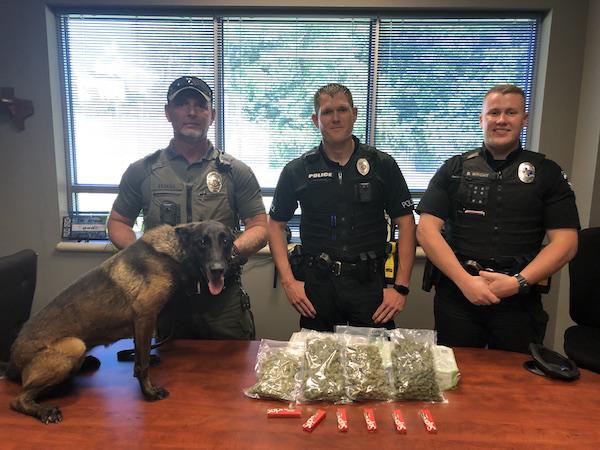 July 24, 2019 - Officer Brian Wright of the Center Police Department conducted a traffic stop on a black Chevrolet Cruz for defective tail lamps at approximately 2pm on Thursday, July 18, 2019. Officer Wright also knew the driver to have an invalid driver’s license from previous encounters.

Upon speaking with the driver Luis Argudo, 25, Officer Wright developed reasonable suspicion that contraband was present in the vehicle. Officer Wright requested a K-9 be deployed. Captain Joey Hudnall of the Tenaha Police Department arrived and prior to deploying the K-9 could himself detect the odor of marijuana in the vehicle.

The officers conducted a probable cause search of the vehicle and approximately 18 ounces (over a pound) of high quality marijuana and six cartridges of THC was located in the trunk of the vehicle.

Argudo had a passenger with him a Javier Gonzalez, 28. Neither of them would claim ownership of the contraband.

Both subjects were placed in to custody and charged with delivery of marijuana > 1/4 oz <= 5 lbs (State Jail Felony) and Manufactory/ Delivery of a Controlled Substance Penalty Group 2 or 2A >= 4G <400G (F-1).