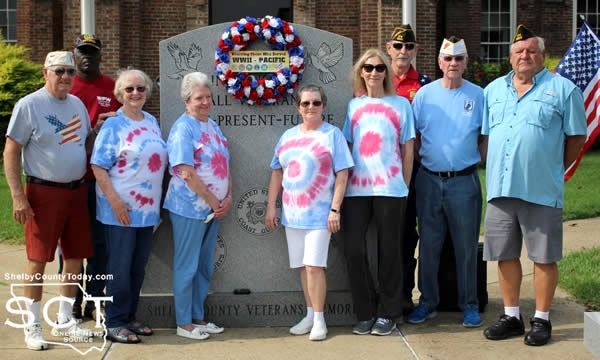 September 5, 2021 - VFW Post 8904 and Auxiliary observed Victory Over Japan Day on the Center square in front of the Shelby County Veterans Memorial on September 2, 2021, for the 76th anniversary of the formal surrender of the Japanese aboard the USS Missouri in Tokyo Bay. 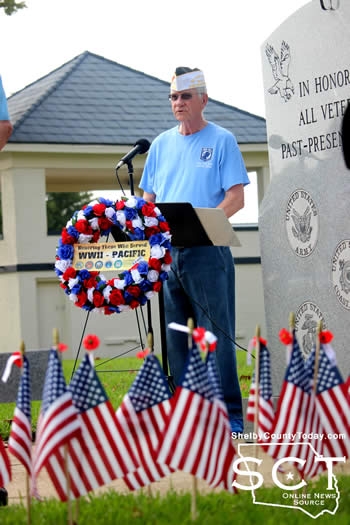 Larry Hume, Post Quartermaster, led the program and he explained as part of the surrender ceremony on the USS Missouri a radio broadcast of President Harry Truman was played. Hume recited some of what President Truman said in his address.

President Truman said in part "My fellow Americans, and the Supreme Allied Commander General MacArthur in Tokyo Bay. The thoughts and hopes of all America, indeed of all the civilized world are centered tonight on the battleship Missouri. There on that small piece of American soil anchored in Tokyo, the Japanese have just officially laid down their arms, they've signed the terms of unconditional surrender. Four years ago, the thoughts and fears of the whole civilized world were centered on another piece of American soil, Pearl Harbor. The mighty threat to the civilization which began there, is now laid at rest. It was a long road to Tokyo, and a bloody one. We shall not forget Pearl Harbor, and the Japanese military will not forget the USS Missouri. The evil done by the Japanese war lords can never be repaired or forgotten,"

The last sentence by President Truman is why we are here today, "The evil can not be forgotten. Those who sacrificed and served can also never be forgotten," said Hume.

(Hear President Truman address by clicking on this link) 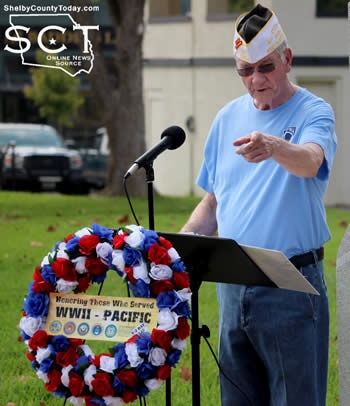 "Today we honor Shelby County World War II Veterans who served in the Pacific, that were killed in action, or they're still missing in action after so many years," said Hume. "We have 37 flags, one representing each one of them." 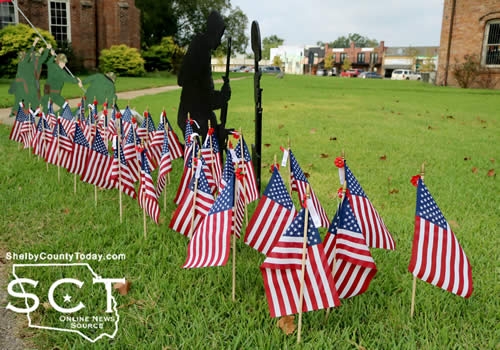 Honored during the ceremony were 37 Shelby County World War II Veterans who served in the Pacific, and were killed in action and now buried overseas or remain missing in action. Reading the 37 names aloud were Janet Ramsey, Auxiliary member; Theresa Hume, Auxiliary member; and Mary Fausett, Auxiliary President.

Some of the audience present shared recollections of family members who served in the military during that time. 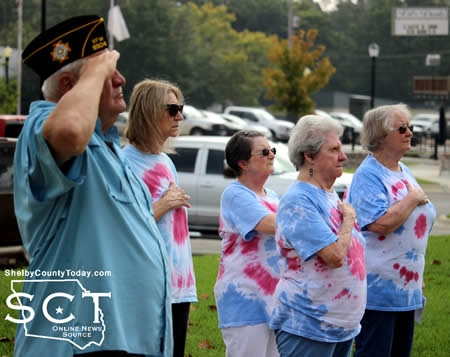 In honor of all who served in the Pacific, a memorial wreath was placed on the Shelby County Veterans Memorial by Post Life Member Mike Wulf. 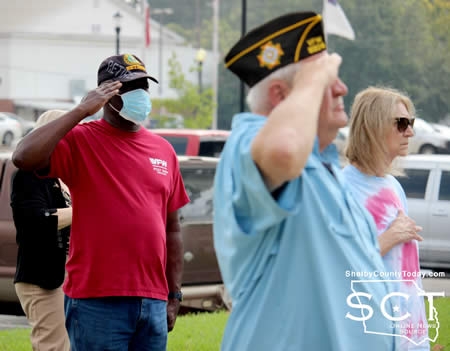 "World War II Veterans are starting to pass quickly, in World War II there were 16 million men and women who served, and as of last year there were just over 325,000 alive today," said Hume.

Hume stated, over the past few months he has been trying to locate living World War II Veterans that reside in Shelby County, and so far he has located Allen Maurice Baker, USS Jason, USS Estes, and USS Mason Bernard Woodfin, Army Air Force, a resident of Timpson; A.J. Procell, of Joaquin who was in Tokyo Bay during the surrender; Walter Peddy, United States Navy, who just passed away July 17; Margaret Parkman, United States Women's Army Corps; Jake Hutto, United States Army, who passed away in April 2021; and Darrell Hughes, United States Navy - USS Springfield, who now lives in Houston.

In conclusion of the program, Taps was played as presented by Gene Hutto, Post Commander. 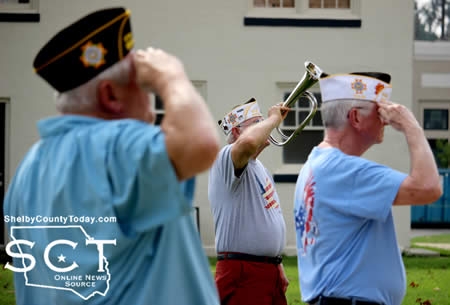 Just before the program VFW Post 8904 and Auxiliary members presented Allen Maurice Baker, who is 93, and is one of the Veteran of World War II Hume recently located.

"We'd like to present you with this gold plated, World War II Veteran Victory Medal for your service in the Pacific and World War II," said Hume.

Baker was very appreciative and stated he just volunteered and went and did his part.

Hume explained the medal presented to Baker is a gold plated replica of the World War II Victory Medal. 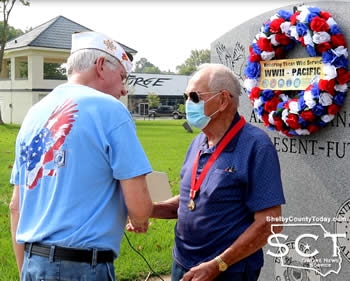 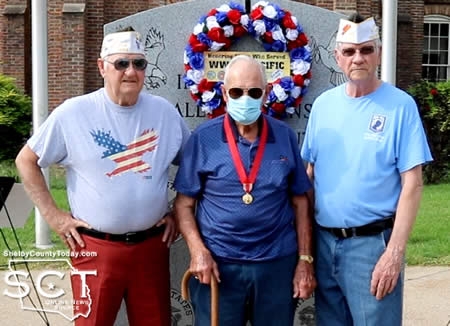 2015 Video of A.J. Procell sharing his experience aboard the USS Missouri