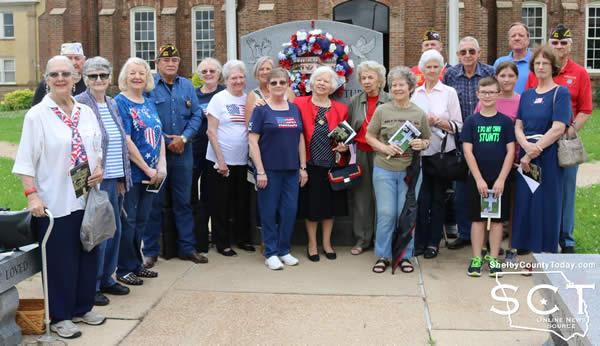 The event was opened by Larry Hume, Post Quartermaster, and an opening prayer was led by Joy Hutto, Auxiliary Chaplain.

"We're here today to commemorate the 75th anniversary of one of the most important dates in our history that's commonly known as D-Day," said Larry Hume, Post Quartermaster. "Code named Operation Overlord D-Day was the turning point in World War II."

Post and Auxiliary members gathered before the Shelby County Veterans Memorial with community members on the Historic 1885 Courthouse grounds to lay a memorial wreath. 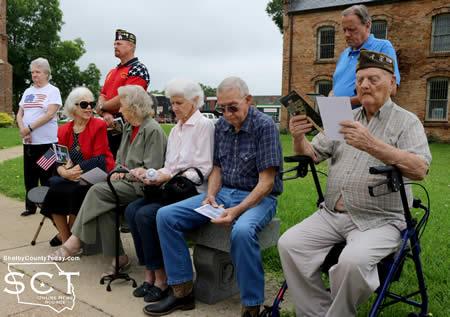 Hume thanked everyone for attending and gave a brief history of D-Day.

"D-Day was the turning point in World War II. June 6, 1944 saw the start of the largest air and sea operation in military history and remains so today," said Hume.

"It's hard to conceive the epic scope of this decisive battle that foreshadowed the end of Hitler's deam of Nazi domination," said Hume.

Hume described it was the largest air, land and sea operation before or since D-Day. It included over 5,000 ships, 11,000 airplaines and over 150,000 servicemen.

"After years of meticulous planning and seemingly endless training for the troops, the Allied forces it came down to this, the boat ramp goes down, then they jump, swim, run, crawl to the cliffs," said Hume. "Many of the first young men, most not yet 20 years old, entered the surf carrying 80 pounds of equipment, and they faced over 200 yards of beach before reaching the first natural feature offering any protection. Many were killed as they left the landing craft."

Hume explained they were blanketed by small arms fire and bracketed by artillery, they found themselves in "Hell."

"When it was over, the Allied forces had suffered nearly 10,000 casualties and more than 4,000 were dead. Yet, somehow due to planning and preparation and due to the valor, the fidelity and sacrifice of the Allied forces fortress Europe had been breeched," said Hume. 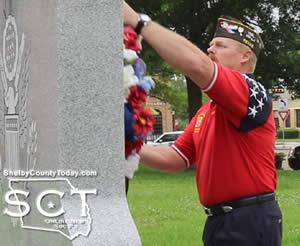 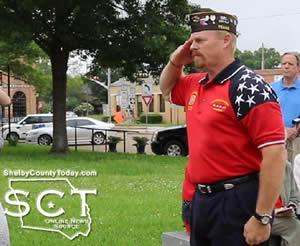 There is no official casualty figure and Hume said the total Allied casualties on D-Day are estimated at 10,000 and U.S. Forces lost over 6,600 that day.

In remembrance of those from Shelby County who were in Europe on D-Day or just after, their names were read aloud by members of the Post and community:

Laying the memorial wreath was Robert Hughes, followed by the playing of Taps presented by Gene Hutto, Post Commander.