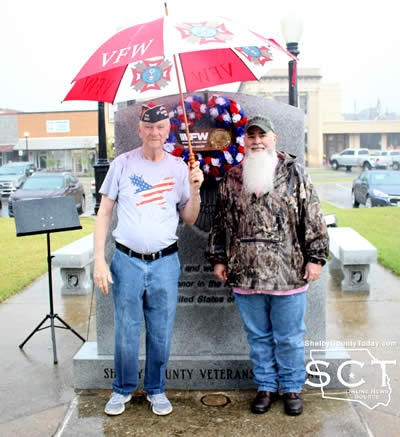 October 24, 2021 - VFW Post 8904 and Auxiliary honored those who served in the military during Operation Enduring Freedom in a ceremony held October 12, 2021.

Although the weather wasn't agreeable on that day with steady showers coming down, as would be appropriate for the day, the group endured and braved the elements to participate in the ceremony regardless.

The opening prayer was given by Kenneth Ramsey, Post Chaplain, and the program was led by Larry Hume, Post Quartermaster, and the recited the Pledge of Allegiance to our nation's flag.

"It's been 20 years ago since America launched its counter-attack against terrorism, attacking terrorist targets in Afghanistan and ushering in Operation Enduring Freedom," said Hume. "To date there have been 2,300 military deaths in Afghanistan. Among that number are sons and daughters of big cities and small towns."

Hume reminded everyone of the 15 service members killed in Afghanistan on August 26 at Kabul International Airport less than a week before United States was set to withdraw.

"Shelby County, as in all previous wars has suffered losses. U.S. Army Specialist Cory Bertrand and Sgt. Kevin "Casey" Roberts," said Hume. "U.S. Sgt. Kevin "Casey" Roberts was killed in action on May 7, 2008, when his vehicle hit an improvised explosive device commonly known as an IED. He was not from here, but he married a local girl and fell in love with Shelby County, Texas, and his wish was to be buried in the West Hamilton Cemetery." 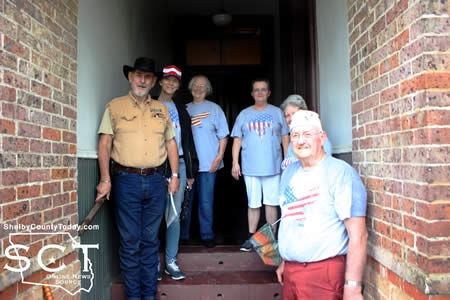 Hume continued, "U.S. Army Specialist Cory Bertrand died in Afghanistan five months later on October 14, 2008, one month before his 19th birthday. His vehicle also struck an IED, and he was buried in the Pleasant Hill Cemetery."

In honor of all those who served and sacrificed Sean Martin, VFW Post 8904 member, placed the memorial wreath. Taps was then played as presented by Gene Hutto, Post Commander.