"What's Happened to the Whippoorwill?" by Neal Murphy

April 30, 2021 - Anyone who has camped out in East Texas has probably had this experience: You’ve spent the evening sitting around the campfire after a satisfying dinner. A nice gentle breeze cools the evening air as you settle down for a night of blissful sleep. Then, it starts - “Whip-poor-will, Whip-poor-will”, the sound of a bashful bird serenading you. 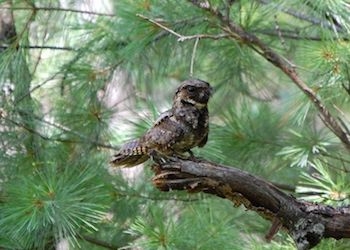 Initially you close your eyes and smile, enjoying the sounds of nature. However, thirty minutes later you’re still hearing that haunting sound, “Whip-poor-will”. You are being kept awake by a bird singing its own name. Unfortunately, that evening serenade is becoming increasingly rare throughout Texas and the rest of the country. In fact, it has been years since I have heard the sound of that reclusive bird.

The Eastern Whip-poor-will is becoming rare. Several reasons have been proposed by experts, such as habitat destruction, predation by feral cats, dogs, and hogs. Some even blame overuse of insecticides. So, no one really knows the true reason for its decline.

Due to its haunting, ethereal song, the Eastern Whip-poor-will is the topic of numerous legends. One legend says that the whip-poor-will can sense a soul departing, and can capture it as it flees. This is likely related to a Native American folk belief that the singing of the birds is a death omen. This is also referred to in a short story by James Thurber in which the constant nighttime singing of a whip-poor-will results in maddening insomnia.

A robin-sized nocturnal bird, the whippoorwill is rarely seen. A mottled brown bird, it blends in with the forest floor. During the day the only way you can see them is if you flush them off the forest floor. If you’re driving at night you might see them at the edge of the road.

Whippoorwills essentially fly low about the forest with their large mouths open, eating moths and other flying insects. These birds forage at night, catching insects in flight, and normally sleep during the day. The female nests on the ground in shaded locations among dead leaves, and usually lays two eggs at a time. The bird will commonly remain on the nest for around twenty-one days until the eggs hatch. The male seldom is seen around the nest, but rests horizontally on a low tree limb, which is an unusual posture for a bird.

The whip-poor-wills usually fly around livestock at dusk to feed on insects swarming over the animals. It was once believed that they sucked the milk from goats’ udders and caused them to dry up, hence their family name, “Caprimulgidae”, from the Latin ‘capri’ and ‘mulgus’, meaning “goat-milker”.

The birds usually sing their loudest at dusk and dawn. The record number of calls in a row by a single bird is 1,088, perhaps accounting for their species name, vociferous. A group of whip-poor-wills are collectively known as an “invisibility” and a “seek” of whip-poor-wills.

The shy but noisy whip-poor-will has been the subject of a number of songs in the past. Hank William’s 1949 song I’m So Lonesome I Could Cry opens with the lyric, “Hear that lonesome whip-poor-will. He sounds too blue to fly”. The swing classic The Birth of the Blues contains the line, “From a whippoorwill high on a hill they took a new note, pushed it through a horn ‘till it was worn into a blue note”.

In the event that you are able to hear a whip-poor-will singing his name in the night you might remember these words from the song Whippoorwill, “A cold dead night, after a windswept day the fire burns high. But I’m just listening to the whippoorwills cry. Oh, how it carries so fine. I’ll bet it floats miles straight through your window.”