"The Church Where Everybody is Somebody."

Across the Preacher’s Desk: Rising From Defeat

September 8, 2022 - Joshua was born a slave and yet became the leader of Israel. He was appointed to lead Israel into the Promised Land and was commissioned by the Lord to lead His people. Leading the people of God, Joshua went from victory to victory. They successfully crossed the flooded Jordan and conquered the fortified city of Jericho.

Yet, Joshua sent a few thousand to conquer Ai, and they were defeated. Following this, we see Joshua on his face, defeated and in despair.  We hear the Lord tell Joshua to get up and He asks Joshua why he is lying on his face. (Joshua 7:10)

Well, Joshua did rise up and he led his people to victory. When we feel defeated, we need to remember all that God has done for us. He loved us, He gave His son for us, and he will also give us the victory. Like Joshua, when we suffer defeat, if we are not careful, we too will become problem conscious and not power conscious. Paul tells us that God gives us the victory through our Lord Jesus Christ in I Corinthians 15:57. That victory comes to those who submit to the will of God, give their lives to Christ and live their lives for Jesus.

It’s something to think about. . . TBP

September 7, 2022 - Mt. Horeb Baptist Church in the Bland Lake Community of Center, Texas would like to invite everyone to their Pastor and Wife's 5th Anniversary Service on Sunday, September 11, 2022. 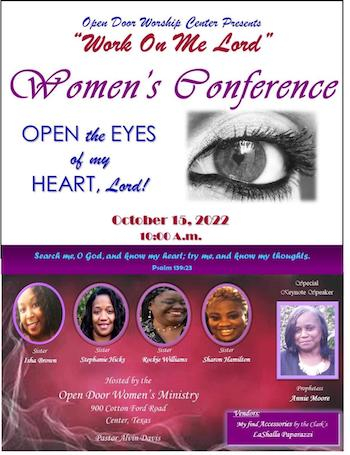 September 5, 2022 - Grace and peace from our brother, Jesus. For the third Sunday in a row, I mentioned the Chinese proverb (or possible curse), “May you live in interesting times.” The weather has certainly been interesting the last week of August. Dallas had a historic, once-in-a-thousand-year rain, and the temperatures of the hottest month for Texas have been in the 80s, while other parts of the country are getting our usual triple digits. The possibility of rain has been in the forecast almost every day. Despite the rains, we are still in the midst of drought, although most counties and parishes have lifted burn bans.

On Wednesday, I took sacks and sacks of new children’s underwear and socks to Community Christian Services. I always get a good vibe when I visit with the volunteers as boxes of food are brought out to lined-up cars. I dropped off what Paxton Methodist had gathered during the month of August, along with a couple of checks. In September Paxton Methodists are going to donate macaroni and cheese to CCS. Today we also discussed the Kids’ Christmas part of CCS; Sue is our church’s contact for that, and she had information from Beverly at First Baptist.

We got new Sunday School booklets for Fall 2022, so we were introduced to new themes and a new writer. This first lesson spoke about standing up against oppression. The scripture came from the first two chapters of Exodus, where we hear about baby Moses. Claudia liked this lesson, as she remembered hearing the wonderful story when she was young. We are told that Joseph and his family coming to Egypt to escape hunger and famine had been generations ago. The Hebrews had grown in such numbers that the pharaoh felt threatened and had the Hebrews enslaved. When their population continued to increase, he ordered Hebrew baby boys sought out and killed. That didn’t work either. The author of our lesson focused on two Hebrew midwives, Shiphrah and Puah, who defied the pharaoh and concealed the births of baby boys. One child they saved, Moses, became the lawgiver who would later lead his people out of Egypt.

It being the first Sunday of the month, we celebrated a Service of Communion and Remembrance. In the United Methodist Church, communion is open and the table is considered to be Jesus’ table, not the individual church’s. Our Gathering Words were based on Psalm 139, and we spoke the Apostles’ Creed as our affirmation of faith. To recognize Psalm 137’s “By the rivers of Babylon,” we sang “On Jordan’s Stormy Banks I Stand.” Our second song was “Marching to Zion,” and Gene shared about his and Joy’s trip to Zion National Park in Utah. One bulletin quote was from Malala Yousafzai, at 17 the youngest recipient of the Nobel Peace Prize: “If you go anywhere, even paradise, you will miss your home.” The other was from Frances Clark, an American pianist: “There wouldn’t be a sky full of stars if we were all meant to wish on the same one.”

The Gospel lesson, Luke 143: 25-33, was one of those “hard sayings” of Jesus. He turns to the growing crowd and tells them the possible costs of discipleship, suggesting they weigh their decision very carefully. Those considering what this young teacher was saying were at a crossroad. I used Psalm 137, a gripping lament of the people of Israel who, after being enslaved, were also at a crossroad. Held against their will by a foreign government, they were living in “interesting” times (translation: frightful).

Whoever you are, in whatever faith you were born, whatever creed you profess; if you come to this house to find God you are welcome here. Paxton United Methodist Church is an inviting church that takes to heart the idea of “Open Doors, Open Hearts, and Open Minds.” Worship begins at 10:00. Our email address is paxtonumc@yahoo.com. If you would like the weekly email newsletter about Paxton Methodist, you can send your email address to the Paxton email address, and I will add you to the list. God’s Speed.

September 1, 2022 - The Pastor and members of Bright Morning Star Baptist Church invites you to join in with us as we celebrate Our Annual Usher’s Day on Sunday September 11th at 2:30 p.m.

Special Guests will be Pastor Jeremy Moore and the Friendship Baptist Church of the Bobo community. Come on out and enjoy!

Across the Preacher’s Desk: The Glory of God

September 1, 2022 - This past June we had the privilege of taking a family vacation to the Smoky Mountains. All of the family was there, both of our sons and daughters-in-law (truly, they are more like daughters to us) and of course the grandsons. We all stayed in the same cabin together for 7 days and still came back loving each other.

One of the most impressive things about that trip, was enjoying the beauty of God’s creation. The first morning in the cabin, some of us were up before the sun was. We were sitting on the porch, drinking our coffee (hot, strong coffee) facing west as the first light of a new day was showing itself. We were staying on top of a mountain in North Carolina. As the first light of the new day appeared, we were sitting above the clouds, looking at some mountains in the distance, and it looked as if you could just step out on the clouds and walk across to the next mountain.

As we spent time there, we saw beautiful rock formations, gorgeous flowers and scenery and were privileged to witness some of the most beautiful sunsets you have ever seen. With all the beauty around us on top of that mountain, a passage of scripture came to my mind. The Psalmist would write in Psalm 19:1; “The heavens declare the glory of God”. Yet, another passage from the Psalmist also came to mind and this is found in Psalm 14:1; “The fool hath said in his heart there is no God.” I thought, how perfectly the Psalmist describes there those who can see the beauty of this world and deny the existence of God.

It’s something to think about... tbp

Join Us for Worship this coming Lord’s Day at Center Church of Christ or online at www.centerchurchofchrist.com. 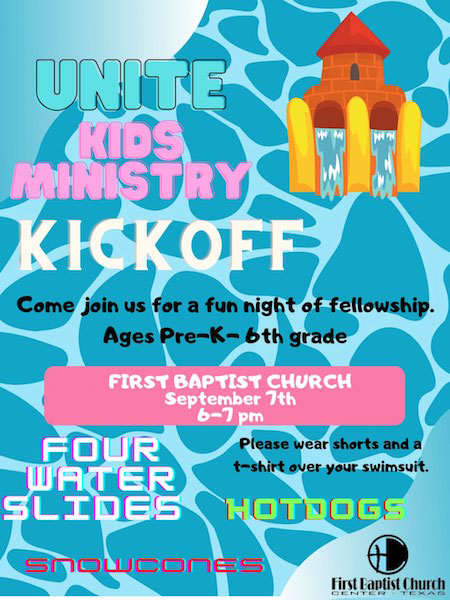 August 31, 2022 - First Baptist Church is having a children’s ministry kickoff party on September 7th from 6-7pm. Come join us for a fun night of fellowship. Ages pre-k - 6th grade. We will have Four Water Slides, Hotdogs and Snow cones. Please wear shorts and a t-shirt over your swimsuit.