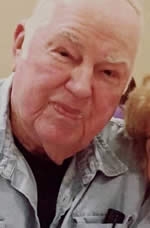 Billy Jack Corbell passed away peacefully, in the comfort of his own armchair in his home in Huxley, Texas, just after lunch on July 8, 2020. Billy Jack was the son of William Perry and Aileen English Corbell, both of whom predeceased him. Billy Jack was born on May 17, 1936, in Shelby County where he lived with his parents, sister Wilma, and two brothers, Gerald and Gordon, in Goober Hill, Texas. After high school, Billy Jack married his soul mate and has been happily married to Sue Corbell for 65 years.

Billy Jack and Sue lived on their family ranch in Huxley, Texas, where he has served as the Marshall of Huxley since incorporated as a City in 1969.

Billy Jack was nothing short of a masterpiece. During his younger years, he worked hard in the oil and gas field. He turned his love of fishing into a business, and served as a guide on Toledo Bend Lake to many people including pro-football players. He consulted for one of his very best friends, who preceded him in death, with his successful oil and gas business. He owned and operated a cattle ranch, chicken farm, and several hunting and fishing properties. He was a member of Sam Houston Masonic Lodge #32 and had become a Shriner. Mr. Corbell was also a member of Lydia Missionary Baptist Church in Huxley, where he could often be found napping during Sunday morning sermon.

Billy Jack’s passion began with football, where he was selected to play for both the North and the South in the Texas State Championship All-Star Game. He said yes to both, before realizing he would have to pick a team. After careful research, we are hard pressed to find a Shelbyville High School football game where Billy Jack missed watching his grands perform and if you were there, you can probably still hear his voice shout “Who ya rooting fer!” Billy Jack loved all things hunting and fishing related, and especially loved hosting his best friends and family for opening weekend of deer season at his prized hunting camp, Hog Heaven. One of his favorite activities was to play 42 with his friends and family, and won his last game of 42 on July 4, 2020, where he proudly beat Blake before heading to bed.

Billy Jack was a loving, reliable, caring, and practical father always ready to listen and assist. As a father and grandfather, Billy Jack was the shoulder everyone looked to for guidance in tough times and was the laugh everyone loved hearing. He taught all his children, grandchildren, and many others how to skin a buck, bait a hook, make a camp fire, take a shooter of bourbon, and love life unconditionally. Billy Jack rarely judged a mistake and was the first to celebrate another’s success. Billy Jack’s number one priority, beyond any other person, hobby, or thing, was his first and only love Sue Corbell. Billy Jack was the epitome of a family man, and established family traditions that have lasted through four generations and continue even today.

If you knew Billy Jack, then you knew his profound ability to coin people with the perfect nickname. You might not like the name, but it would undoubtedly stick to the point where you might forget your real one.

Although always the first to listen, Billy Jack was a natural born storyteller who could capture the eyes and ears of his audience with his twinkling blue eyes and theatrical voice. To know him, was to love him and to be loved by him.

He is survived by:
His wife, Sue Corbell of Huxley

Numerous nieces, nephews, other family; and a host of friends

Pallbearers will be his best friends Brad Juneau, Adam Metts, Robert Cox, and Larry Berg; his son-in-laws Craig Jordan and David Myers; and his grandsons Jasper Corbell and Blake Myers.

Funeral service will be held at 4:00 p.m., Saturday, July 11, 2020, at Watson & Sons Funeral Home in Center with Bro. Lamar Denby and Bro. Michael McArthur officiating.  Interment will follow at Wimberly Cemetery in Huxley. Visitation will begin at 3:00 p.m.