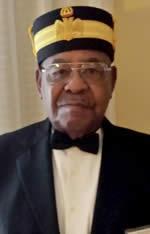 Funeral Service for Sergeant Major (Retired) Booker Gilford Coleman, Lawton, Oklahoma will be at 12 Noon on Friday, January 17, 2020 at the Union Baptist Church in Lawton with the Dr. C. W. Whitlow officiating. Interment with Full Military Honors will be in the Fort Sill Cemetery under the direction of the Howard-Harris Funeral Services.
There will be a Wake with Viewing and Family Visitation at Howard-Harris on Thursday, January 16, 2020 from 6:00 p.m. to 8:00 p.m.  Masonic Last Rights will be conducted at 6:00 p.m. on Thursday, and also at the gravesite on Friday, following Military Honors.

SGM (Ret) Coleman was born May 26, 1929 in Center, Texas to Alvin Coleman and Edith Louise (Osby) Coleman. He died on Friday, January 10, 2020, in Lawton. He accepted Christ at an early age, and united with the Mount Zion CME Church in Center. He is a graduate of the C.H. Daniel High School in Center, TX and later attended and completed classes at Cameron University in Lawton. He married Odell (Lister) Coleman on September 6, 1953; to this union two children were born. His family became permanent residents of Lawton in 1962.

He enlisted into the United States Army on June 9, 1949, and retired as a Sergeant Major on January 31, 1973 after honorably serving over 23 years. He was a Combat Veteran of both the Korean War and Viet Nam Conflict, and completed other assignments in Germany, Hawaii, Fort Bliss, Fort Carson, Fort Chaffee, Fort Riley, Fort Sam Houston, Fort Sill, and Macomb, IL.  His awards include the Combat Infantryman’s Badge, the Bronze Star with Valor for his heroism in Yulmak, Korea; the Army Commendation Medal; Korean Service Medal; National Defense Service Medal; Good Conduct Medal (7th Award); Viet Nam Service Medal; Viet Nam Campaign Medal with-Device, and the Over Seas Service Ribbon. Following his Military retirement he was employed as a Department of the Army Civilian at Fort Sill, and served in TASC and DOL from 1973 to his retirement from Civil Service in 1989.

SGM (Ret) Coleman remained active in Masonry since his induction in 1957. He earned the degree of Grand Inspector General; Commander of Golden Limit Consistory #133, and served as the Past Master of Rising Star Lodge #18. He was a member of Menes Temple #32, and also served over 25 years as the Treasurer for the Lawton, OK Council of Deliberation.  Other affiliations included his being a Silver Life Member of the NAACP Lawton, Oklahoma Branch #6131.

Along with several nieces, nephews, cousins, and friends.

Services are under the direction of Hicks Mortuary of Center, Texas and Howard Harris Funeral Home of Lawton, OK.