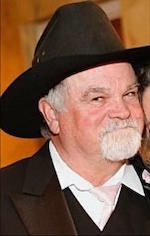 Bruce Howard Denby born Aug 21 1951, left his earthly home Friday, September 17, 2021, in Gary Texas surrounded by his loving wife and family. After becoming ill in January Bruce was no longer able to fight the mystery illness that was plaguing his body.

Bruce, the youngest of five children grew up in Denby Town, Texas. He graduated from Shelbyville High School in 1969 where he was involved in many clubs and sports but loved football the most.

At a very young age Bruce learned to use his hands and skills in carpentry and anything mechanical. If he attempted to build it or fix it it was done with precision and beauty! His love for all things Ford was never called into question. Older trucks and mustangs were his passion projects. When he was not using his skills building something you would find him tinkering on an old vehicle or 10 in his shop. If you knew Bruce for 5 minutes you would surely hear all about the15 vintage vehicles he had and his vision for every one of them.

Although a back condition kept Bruce from serving his country in the military he was so proud to spend 2 years in Iraq helping to rebuild that country. He loved working where he felt like he was making a difference in the lives of those around him at home or on foreign soil. Bruce `made so many faithful friends during his time overseas that have remained close right up to the end. Bruce worked as a saltwater pumper for Nuverra Environmental Solutions the past 10 years. He loved to work and was only recently sidelined from doing what he loved due to his illness.

Bruce loved Jesus, his family and friends and his Country.

One of the greatest singer/songwriters that never made it, Bruce Denby! When he decided to enjoy a little down time you could find him in his man cave lightly strumming his guitar to some Gary Stewart, #3 on his jukebox, or any old school country music song. Karaoke was for sure his favorite way to wind down from a week of hard work. If you were looking for some belly laughs and a great night he was your guy!

Bruce loved to garden and no matter what he planted or where he planted it, IT GREW! It was said by Carolyn, his wife of 19 years, “ I do believe Bruce Denby could plant a tire and grow a car”! His friends and neighbors would agree!

The heart that beat inside Bruce’s chest was as big as the State of Texas. He was quick to smile, generous with all he had, never judging and always ready to give a little grace. Bruce may have been smaller in stature but he was a Giant in kindness.

Left to cherish his memory is wife and best friend Carolyn.

Mother in law and friend for many years, Annie Jean Barbe.