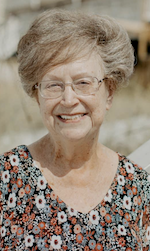 A funeral service will be held at 10:00 a.m., Saturday, January 16, 2021, at Watson and Sons Funeral Home with visitation beginning at 9am. Bro. Andy Wilson and Bro. Dathan Triplett will officiate. Interment will follow at Oaklawn Memorial Park in Center.

Born November 15, 1950, Mary Lou is the daughter of the late Malcolm Lee Bussey and Mattie Lou Steele Bussey. She was a member of Center First United Pentecostal Church in Center.

Mary Lou attended Center Public schools, the Hockaday School in Dallas, and graduated in May of 1969 from Center High School. She met the love of her life, Howard Lout, soon after and they married on December 23, 1969. Except for a short time attending Stephen F. Austin State University in Nacogdoches, they made their home in Center, Texas where they reared three children.  After 50 years of marriage, Howard was called home this past April. She missed him greatly and joined him in Heaven on January 11, nine months to the day later.

Mary Lou was a gifted writer, putting her talents to use in her chosen profession as a journalist. She worked at the East Texas Light Newspaper, the Light and Champion, and the Shelby Countian. She was widely known for her storytelling, photography, and her ability to turn a business idea into an eye-catching newspaper ad. Her REAL claim to fame, however, was her long-running humor column, “Off the Wall.” Described as part Erma Bombeck, part Andy Griffith, her column was enjoyed far and wide as she related the hilarity of her family and community’s everyday life as only she could.

As co-owner of Lout Furniture Showrooms, or  “The Sunshine Place” as it was better known, her signature color, yellow, became evident in everything she touched - yellow furniture store, yellow Lincoln Mark 5, yellow delivery trucks for the furniture store. She liked those happy colors!
Later in life, she taught 5th and 6th grades at Christian Learning Center and Center Christian Academy.

Her most cherished title by far was the one of “Mammy” (as she was known to her grands.) She was immensely proud of each one and their accomplishments. She left her grandkids with treasured memories and a wonderful legacy. When she found out that she would be promoted to “Great Grand Mammy'' in April of 2021, she was over the moon. No doubt, her little Mooter would have been spoiled ROTTEN.

She loved spending time with family, especially on trips to the beach. She loved being AT the beach, not necessarily ON the beach.
She gave her life completely to Jesus at Campti Pentecostal Church and more recently attended Center First United Pentecostal Church where she was involved in various ministries over the years.

In her own words:
“The most important things in my life are my Lord, my church, my family, and my friends. I always loved to find humor in everyday situations and believe that ‘a merry heart doeth good like a medicine’.”