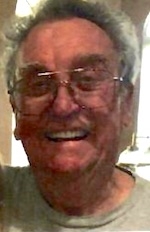 Rex Earl Howard was a beloved father, grandfather and spouse during his 84 years of life. He passed away peacefully on Monday, June 20, 2022.

Rex will be lovingly remembered by:

Rex was preceded in death by his granddaughter Dayna Howard of Shelbyville, brother Bobby Howard of Texas City, Texas and parents Lewis and Pauline Howard of Center.

He was the proud "Papaw" to his many grandchildren and great-grandchildren as well as a wonderful brother, uncle, friend and mentor.

Rex was born in Center on November 5, 1937 and graduated from Center High School in 1956. He moved to Deer Park in 1976 where he worked as a Chemical Operator until his retirement. Rex had a love of gardening and as an avid gardener, he always had plenty of extras to share. Rex and friends even started, and diligently maintained, a garden in downtown Deer Park as a project for the community.

His greatest gift, though, was in his discipleship and the many friends and family who came to know Jesus through knowing Rex. He always had time to share his faith and spent many hours teaching, preaching and mentoring. The family will miss his big presence in their lives but rejoices knowing he is at peace and resting as the good and faithful servant he was.

A memorial service will be held at 2pm on July 2, 2022 at Missouri Street Church of Christ in Baytown, Texas.

In lieu of flowers, donations can be made online to St. Jude Children's Research Hospital at stjude.org, by mail (click here for form), or by calling (800) 805-5856.