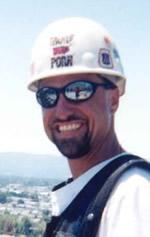 Ronald Brent Clark, 50, of Center, Texas passed away on May 13, 2019 in Center. He was born on November 4, 1968 in Houston, Texas to Ronald Jay Clark and Norma Jean McCarty Clark. Funeral services will be at 1:00 on Saturday, May 18, 2019 at Clever Creek Baptist Church with Bro. Jerry Hopkins and Bro. Bobby Warr officiating.

Interment will follow at Clever Creek Cemetery. A visitation will be held prior to service time from 12:00 PM to 1:00 PM on Saturday, May 18, 2019 at Clever Creek Baptist Church.

Brent grew up in Pasadena and graduated from Pasadena High School. He attended San Jacinto Junior College before moving to California for a few years for work. Brent decided to return to Texas to start a family closer to home. About six years ago, he moved back to Center in order to help his mom and dad. Brent was somewhat of a Renaissance man with a list of talents and interests.

As a young man, he learned to play the violin, was very athletic enjoying baseball and football, but also made sure to focus on his studies earning a spot on the Dean’s List. Brent even received his skydiving certificate. As an adult, he worked as a carpenter, pipe-fitter and scaffold builder. There just wasn’t much Brent couldn’t do. While he was no stranger to hard work, Brent made sure to enjoy life. He very much liked spending time outdoors fishing, shooting and riding motorcycles.

His favorite moments were spent with his daughter. She was the light of his life, and his whole world. Family meant everything to Brent and there was nothing he wouldn’t do for their happiness. He wanted to spread life to others and he did that with his infectious smile and warm personality. Brent will be remembered for the laughter and love he shared with so many.

Brent is survived by:
his mother, Norma Jean Clark of Center

Honorary pallbearers will be Robert Earl Hodges and Oren Warr.

To send condolences or to sign an online register, please visit www.mangumfhnet.