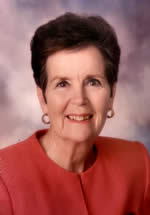 A visitation will be held at Watson & Sons funeral home on Friday, November 25, 2022 at 10:00 am. A graveside service will follow at 12:00 pm at Oaklawn Memorial Park, with Brother Charles Williams officiating.

Ruby was born on October 9, 1937 to Hobson and Lela Jones Lawson. She was the ninth of ten children. She attended Center High School and married her high school sweetheart, Charles Paul Hughes. They were married for 63 years. In their later years, if she and Charlie were walking together, they were holding hands. If ever asked why they held hands everywhere they went, they said they were “holding each other up.” They spent most of their days geocaching and exploring during their retirement, including finding caches in every county in the state of Texas. Ruby was a homemaker, gardener, excellent cook, and quilter extraordinaire. Ruby and Charles Paul raised three sons, Mitchell, Charles Leslie, and Paul. She tended the family poultry farm until after their sons were grown. For many years, she worked at the Shelby County Courthouse during elections. She was part of an elite group of quilters at the James Antioch Community Center, which met weekly to hand stitch the quilts that they all made. Throughout her lifetime, she made dozens of quilts, and mostly gave them away to people that she loved and cared about, including at least one for each of her children and grandchildren. She was a member of Providence Missionary Baptist Church for more than 60 years.

Ruby is survived by:

She is survived by many nieces, nephews, church family, friends, and special lifelong friends James and Faye Rudd.

The family requests that in lieu of flowers, donations be made to St. Jude’s Children’s Research Hospital at stjude.org/donate or the James Antioch Community Center c/o Ellen Manning, which may be mailed to 4430 State Hwy 7E, Center, TX 75935.

The family would like to thank the staff at Pine Grove Nursing Center and Affinity Hospice for their care of our mother (and MeMaw).