“A Lesson From Spot” by Doug Fincher

September 28, 2021 - Spot, a Painted Bunting that I’ve photographed the past three years, has a new family in the sand hills near Center, Texas. All three fledglings flew into the grass where their parents often feed. They are fully feathered and except for their lack of color and yellow at the corner of their mouths, they look like adults. After their crash landing, they began frantically fluttering their wings to get fed. 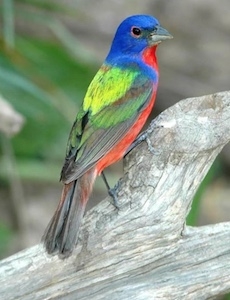 But instead of feeding them, Spot angrily fussed and chased them away. These determined little birds not only tried to get food from Spot, but from every other adult that flew into their feeding area. All the adults wisely ignored their begging like Spot did.

Although our country has a large number of people who can’t feed themselves, we also have a lot of folk who could but won’t… and unless we stop serving them, they never will.

Even the birds know that.