“We Broke It” by Doug Fincher

January 13, 2020 - When I moved to the Big Woods Community near Vinton, Louisiana, I was located only one mile from Bearhead Creek, claimed by area anglers as a fisherman’s paradise. The church parsonage and was only a mile from the road that led to the creek and my old Toyota pickup would just barely make it through the rough road to the creek. On this particular morning, I was within a hundred yards of my fishing spot when my truck’s front tire hit a deep hole and broke a tie rod.

I was miles from home on a road that had absolutely no traffic on it that day but I knew if I could make it to deacon Lawrence Mitchell’s house, he could pull my truck home with his tractor. After I got to Lawrence’s, he told me to stand behind him on his tractor and for four miles, I bent my knees every time we hit a pot hole.

Lawrence backed up, tied a chain to the tractor, and told me to hook the other end to my truck bumper. “You’ll pull the bumper off”, I insisted. “Hook it on”, he quickly responded. “I’ve pulled a many of them down this road.” One jerk from the tractor sent the little bumper flying through the air. Lawrence quickly wheeled from the tractor, looked curiously at the bumper, and sighed, “Well, Preacher, we broke it.”

The next Sunday Lawrence was telling the church about my truck breaking down on the Creek Road. “The truck bumper was so weak that we broke it when we tried to pull it.” I told the members that every word Lawrence told was true---except one word: “It was not 'we' that broke that bumper,” I laughed. 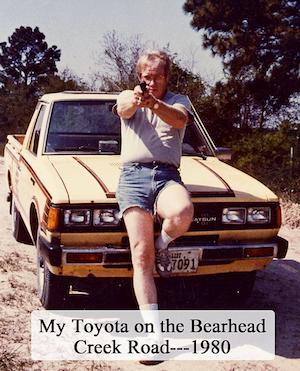