October 7, 2021 - The 45th Annual East Texas Poultry Festival activities are off to a start as the opening ceremonies took place this morning on the Frances Oates Stage under the big tent as the Poultry Festival returns to the Center square following the completion of many improvements. 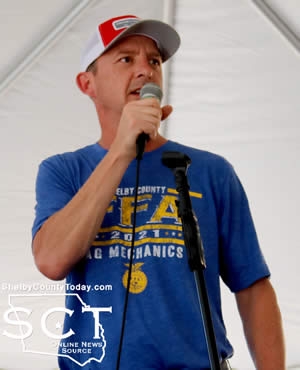 Josh Payne, 45th Annual ETPF Chairman, welcomed everyone to the festival which is presented by Farmers State Bank. He thanked all the sponsors, volunteers, the ETPF Steering committee and many more.

“Part of our new, hopefully improves layout, I’m glad y’all are here to experience it. We think you’re going to have a great weekend,” said Payne.

Bobby Bressman, First Baptist Church of Center Pastor, gave the invocation at the opening of the ceremony, and the Center high School band performed the National Anthem. The Pledge of Allegiance was led by Timpson Elementary School Kindergarten students. 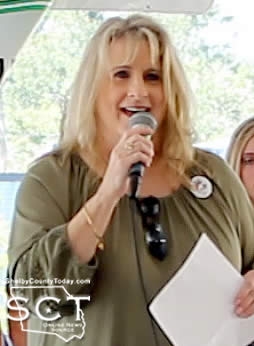 Shelby County Judge Allison Harbison gave a welcoming speech, “On behalf of Shelby County I would like to welcome everyone to the 45th Annual East Texas Poultry Festival. Welcome to the beautiful Shelby County Historical Courthouse square. It’s truly an honor to be here this morning, this festival brings all the citizens of the county together to celebrate the poultry industry.”

David Chadwick, City of Center Mayor and President of Farmers State Bank, addressed those in attendance, “What we have waited for it seems like an eternity has come back home and we’re here today. It’s hard to believe 45 years ago a lady named Dell Brown, who had a drug store across the square, had convinced the Singing Christians from Tenaha that they needed to come to Center, they were going to have a festival. The Singing Christians already had an organization, an annual homecoming that they were doing in Tenaha, but if you ever had the opportunity to meet Dell, you realized that you were going to say, ‘yes,’ and sure enough they said yes and then we started the festival 45 years ago this month.” 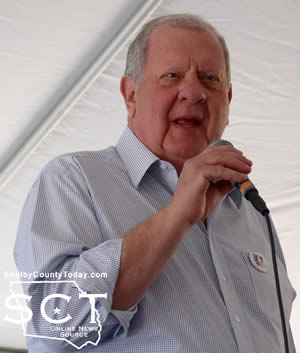 Mayor Chadwick congratulated all involved in the preparation of the festival and should there be any failures during the festival, he invited the criticism so the issue could be corrected.

“It is great to have you back on the square as we salute one of the leading industries in Shelby County with some of the most outstanding citizens of our county to help us celebrate today,” said Chadwick. 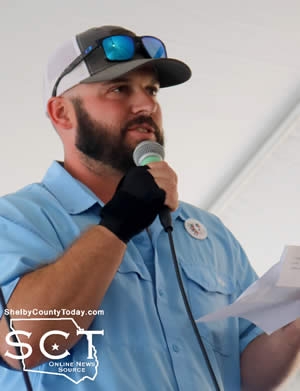 Will Blackshear, 2021 Shelby County Chamber of Commerce Chairman, welcomed everyone to the festival on behalf of the chamber of commerce.

“Josh Payne and the Steering committee worked with the area chairmen, on behalf of the chamber board members, we thank you for your leadership and your dedication. Also we’d like to thank the ambassadors and our Junior Chamber of Commerce, and Young Ambassador students for their hours of volunteer work. I’m looking forward to a fun 2021 Poultry Festival. Let’s have a great weekend!”

A special presentation was made to Chris Watlington in recognition of his years of service to the East Texas Poultry Festival Pageant as the official emcee.

“We’ve been doing the pageant for years, and years, and years, and this man here, Chris Watlington, has been the master of ceremonies for many, many, many years,” said Deborah Chadwick, Shelby County Chamber President. “Chris has been a part of it the whole time and at the coronation we were able to recognize him, but we have another special gift.” 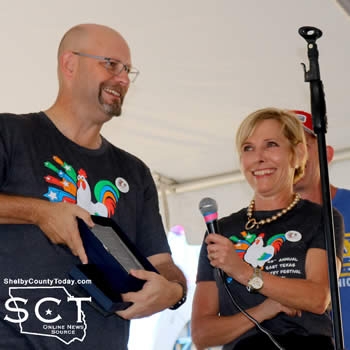 Chadwick thanked Watlington for all he has done and presented him with the gift that turned out to be an award that said, “Thank you for your many years as Master of Ceremonies for East Texas Poultry Festival Coronation.”

Watlington expressed his gratitude and remarked Emilee Elliott, who was present, is one of the queens this year and her mother was also crowned queen in the past.

“I’ve been doing this since the 80s and your mother was the queen the first year I did it and so I thought, ‘what better way to retire,’ and then I just went over to Terrie and asked her if that was true and she said, ‘it wasn’t,’ I started the year after. So I don’t know, maybe I’ll have to come back and do one more, but it’s been a great, great long run full of beautiful ladies and a great tradition. Thank you,” said Watlington.

Senior Queen Emilee Elliott and Junior Queen Carly Gray were on stage with their entire court and they each had the opportunity to introduce themselves along with this year's Shelby Chick, Sarah Scull .

Following introductions, the ceremonial cutting of the feathers was performed by Queens Elliott and Gray.