The Barber Chair By Neal Murphy 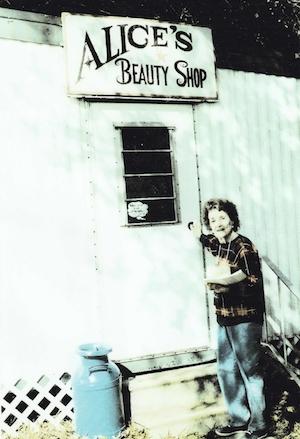 January 17, 2020 - She loved to work with hair. In fact, it became her occupation for over 65 years. My mother, Alice Whitton, was born in Bland Lake, Texas, in 1910. At age 16, she married my father, Cecil Murphy. By age 20, she had two children. At the age of 18, she began cutting and curling her family member’s hair. She acquired her beauty and barber license from the state when she opened her first beauty shop in her home in 1933.

Alice Murphy either owned or worked in a beauty shop in several locations in San Augustine, Texas, over the next 42 years. She officially retired on September 12, 1975. However, her customers would not let her stay retired. She finally gave in to them, purchased a travel trailer, and parked it next to her home on the old Center highway. So, she was back in the business again.

Alice located an old, used barber chair that was just right for her small frame. She bought a shampoo sink, two hair dryers, a couch, a manicure table, and a large mirror, and had them all installed in the trailer. So, at the age of 70, she began her career all over again with Alice’s Beauty Shop.

For the next 20 years, she worked five days per week, making at least 10,000 women pretty. For a period of time, her “shampoo girl” was her older sister, Floy, who was around 90 years old. Most of her customers were long-timers, some customers for over 50 years. She had over 40 standing appointments per week. She never owned a cash register, but instead used an old cigar box in which to keep her money.

In 1994, the State of Texas honored her with the distinguished Yellow Rose of Texas award for her long service to the community. She was age 84 at the time. Cecil Murphy died in 1991, but she continued working in her beauty shop. Finally, at age 90, she could no longer continue working due to her failing health, and she closed the door to her shop for the last time.

Alice died in July of 2004 at the age of 94, joining many of her former customers who had preceded her in death. My brother, Richard, and I inherited her estate, including the beauty shop.

A beauty shop owner in a neighboring town wanted to purchase the travel trailer beauty shop, and its contents. So, it was sold to Sandra in 2005 and was moved to its new location. Sandra and her husband had planned to attach the trailer to their mobile home and use it as a sauna room.

Several weeks later, Sandra told me that she could feel my mother’s presence every time she went into the old beauty shop. The air would get hot, or cold, and things seemed to move by themselves. However, they continued their work of repainting and repairing the old shop.

One day her husband entered the old shop to remove the barber chair that my mother had used for so many years. Something happened, and he ran out of the shop terrified. He told Sandra that “Miss Alice is in there, and she’s mad as hell!” I am not sure how I feel about folk coming back after death to “haunt” a special place. If it is possible, I believe that my mother would have done so to protect her cherished barber chair that was such an important part of her life.

I have talked to the new owner of the old beauty shop recently, and she reports that Ms. Alice seems happy now. The room was painted a pretty pink, especially for her. She has not been heard from since, and I am happy that she is happy. Rest in peace, Alice, for your barber chair is safe.