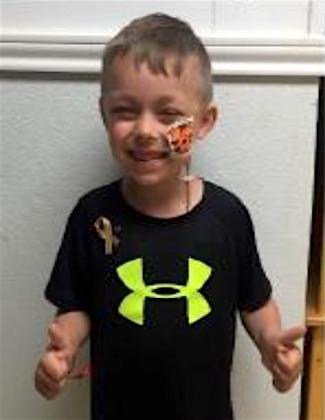 Liam was diagnosed with cancer in April of 2017 at just three years old. Prior to his diagnosis, he was a happy, healthy, exuberant little boy with a wild imagination. Shortly before Easter that year, Liam woke up with severe leg pain and could barely walk. He was seen by 9 different doctors, at four different hospitals, over a period of two weeks before the Leukemia was found. He was immediately admitted into the oncology unit and chemotherapy began right away. With chemotherapy came many physical and emotional obstacles, many of which he struggles with today. He has been in active treatment for going on two years and is not scheduled to complete treatment until the middle of 2020. He has faced this life threatening disease head on with an immeasurable amount of courage and determination but despite all of the physical, mental and emotional setbacks that have come with cancer, he has never allowed it to break his spirit. He is a passionate advocate for raising awareness for childhood cancer. He is the youngest ambassador for Show Me Your Gold, he has founded an organization called Cards of Courage in which he sends encouraging cards to other children who are also battling cancer and his mission at just five years old is to raise childhood cancer awareness one gold ribbon at a time.