The Center VFD was awarded $15,000 for the purchase of personal protective equipment by the Texas A&M Forest Service. After receiving the award letter in October of 2018, the volunteer firemen chose to use the grant funds to purchase Dual Compliant gear for all the firemen. 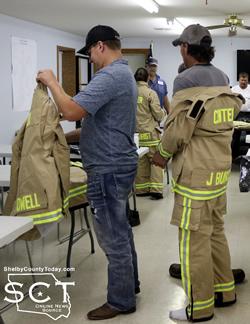 Dual Compliant gear can be used for vehicle extrication as well as woods and grass fires. The gear is light weight and cooler for firemen to wear in the Texas heat.

Volunteer Fireman Del Birdwell said, "It's just a lot cooler and a lot more light weight than our normal bunker gear. And it also gets us more life out of our bunker gear."

Texas A&M Forest Service announced the Rural Volunteer Fire Department Assistance Program was retained and continued by the 86th Texas Legislature. Beginning September 1, 2019, the program will continue at an annual grant budget of $17.3 million. The program was established by the 77th Texas Legislature which passed House Bill 2604 in 2001. The program assists volunteer fire departments with the purchase of equipment and training.

During the October 10, 2018 funding meeting for the fiscal year 2019 approximately $11.8 million in grants were awarded to Texas volunteer fire departments. The Center VFD was awarded their grant during the funding meeting along with two other Shelby County volunteer fire departments. The Joaquin VFD received $6,359 for training aids and the Tenaha VFD received $10,000 for training aids.