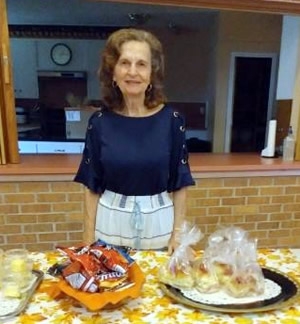 Dottie West provided the refreshments for the meeting.

Dottie West presented her report on The Robe by Lloyd C. Douglas. This is a historical/fiction work. Dottie has always felt that after reading this book, she understood the people during Christ’s time better.

It is the story of the crucifixion of Jesus and was one of the bestselling books of the 1940’s, spending almost a full year at the top of the New Your Times book list. Douglas was a member of the ministry and did not embark on a career as a writer until leaving it when he was fifty-two. His body of work, including short stories and essays, in addition to novels, leans heavily on his religious roots for plots and themes. His inspiration for writing the novel was a woman asked him what happened to Jesus’ garments after the crucifixion. This book was made into a move in the early 1950’s.

Central to the novel is the Roman who won the robe of Jesus at his crucifixion. Some of the characters are historical figures, such as the Roman Emperor Tiberius and biblical characters that are featured include Peter and John.

The importance of the robe of Christ in the novel is not as a relic or powerful artifact, but instead, it is a symbol of the life and message of Christ. Those characters who believe in Christianity in the book are compelled to keep their beliefs private. They live their faith through acts and acceptance of others who may differ with them. Douglas does not attempt to show that Christians are superior, especially with respect to their morality. He simply shows that their beliefs help them achieve a new level of understanding and empathy within themselves.