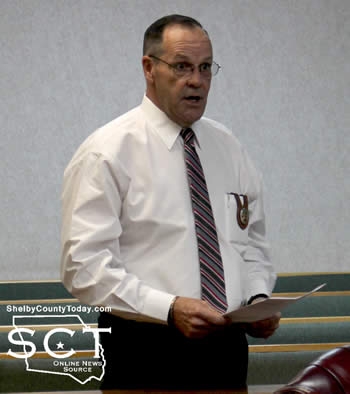 September 7, 2021 - The Shelby County Commissioners approved the receipt of a donation of two storage buildings during their meeting September 1, 2021, for radio antenna equipment.

"This is for the two new microwaves that are going in in Tenaha and Shelbyville," said County Judge Allison Harbison. "The Sheriff's Office, I had called and got a quote for buildings, but they went above and beyond and got a donation of two buildings."

Judge Harbison explained each of the buildings is valued at $6,500 bringing the total of the in kind donation to $13,000 from Spartan Structures.

"These buildings needed to be insulated and be equipped with electrical," said Sheriff Kevin Windham.

As a result, Sheriff Windham explained the buildings will be insulated and electrically wired for their purposes.

"Lieutenant [Tanner] Peace, he reached out to Spartan and they were generous and kind enough to offer us these two buildings at no charge," said Sheriff Windham. "We're going to need it pretty quick, so they said they would get right on 'em."

Sheriff Windham said, on behalf of the Shelby County Sheriff's Department and the residents of Shelby County, "We would appreciate the Commissioners' Court accepting this generous donation of these two buildings for our radio system, because that's what's going to be equipped in there."

The dimensions of the buildings are 8' x 10' and they will have heating and cooling.

A motion carried by the commissioners to approve the donation of the two buildings with a value of $13,000.

At a previous meeting, Sheriff Windham presented a proposal for cameras to be installed in the Sheriff's Department patrol vehicles; however, the cost was at a point where bids would be required.

"You (Sheriff Windham) have gone back to the company, Watchguard, and they gave us a further discount, [total] of $49,440," said Judge Harbison.

This made the amount one the commissioners could consider without needing to seek bids from different companies.

"Each of these new units will be installed in our eight patrol units, we do have a couple cameras that are still functional," said Sheriff Windham. "I think we have three, and those units, their cameras will be taken out and they will be put into our transport vehicles and then also in our trusty vehicles."

Sheriff Windham clarified, vehicles which are used to transport trustys.

A motion carried to approve the purchase of the camera systems at a rate of $49,440 to be sourced from the Covid fund.

A motion carried to adjourn the meeting.