October 19, 2021 - The Shelby County Commissioners made the decision to switch the county cell phone plans to Verizon Wireless after discussion of what available options there are during their meeting October 13, 2021.

Although the decision was made to go with the company, it wasn't based on best available service, it was instead the result of available time to switch from Cellular One to another service running short. The cut off date for Cellular One service to end is November 30, and the county has a large number of lines to make the transition.

A test phone was supplied to the Shelby County Sheriff's Department, as mentioned at a previous meeting; however, it wasn't yet available for officers to try out until the day of the meeting. According to Lt. Tanner Peace, a deputy was testing the service provided while the meeting was in progress.

"They have been to Huxley, Rolling Hills, Joaquin, Haslam Strip, back down [State Highway] 7 East," said Peace. "Basically that side of the county there's no difference, it possibly is even worse than Cell One. There was a location I believe in Rolling Hills area where Cell One works, but Verizon phone could not."

Peace confirmed what Harbison asked, and that service through Verizon did work in Joaquin.

"We're at their mercy, there's nothing we can do about, there's no way we can fix this okay. We're just going to have to do what's best at the time," said Judge Harbison.

Roscoe McSwain, Commissioner Precinct 1, stated it would be Verizon and indicated whoever is finding out what contracts are available would just need to confirm the old Cellular One numbers would be transferred to the new service. Ann Blackwell, County Treasurer, noted a private individual who has switched and was able to keep his number.

Blackwell gave a preliminary rate received from Verizon Wireless of $49 a line. Judge Harbison clarified the majority of the phones they are switching will be Sheriff's Department, Commissioner, Justice of the Peace, and Constable phones.

"That's something that needs to be moving on. November 30th will be here before you know it," said McSwain. "Everybody that wants a phone, they need to get [Ann Blackwell] a list of numbers, how many phones they want, everybody that's gonna do it let's get on with it."

"We have not heard from our radio expansion in months, and it was supposed to be up and operating by the end of July, first of August," said Bellmyer. "Can you get Tracy [Rook, Texas Premier Communications, LLC] back here, because if we can get the radios working across the county some of this cell phone stuff might go away if all the radios within the Sheriff's Office, the constables, and road crews would work I'll get rid of some of my phones."

Bellmyer explained that's the reason he has phones, because he can't get his radios to function. Once the radio system is functioning on the microwave system, Bellmyer says Rook will work with the local fire departments to make sure everyone has capability of communication.

"I'm holding up on Bobcat coming and working on my equipment until we get it up and going," said Bellmyer.

Bellmyer reiterated he wants an update in court since the last update two to three months ago was equipment was still coming from overseas.

McSwain asked about the water tower in Shelbyville, since Rook originally was unaware of space limitations when they gave their proposal, and Judge Harbison said the tower would be ok, "he could make it work." 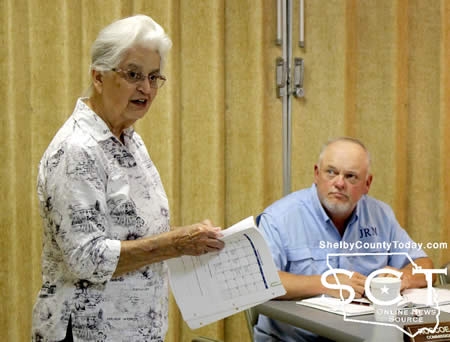 Ellen Manning addressed the court on behalf of the Homemakers Club regarding Texas Extension Education Week.

"We meet once a month to have education things, which we receive when we go to state conference, we just did that in September." said Manning. "Texas A&M comes and presents different things on topics having to do with home keeping."

Manning explained the group keeps track of their volunteer hours, money spent and they present that to their agent and president of the organization. In the past, Manning mentioned the group has received awards for their volunteerism and financial donations made; however, they did not this year.

"In a couple more years we're going to celebrate 50 years being in business," said Manning. "At some times there were 20-30 members that were working, but now we have a difficult problem getting young people and people that are working, a lot of people work."

Manning said a couple years ago the AgriLife Extension Agents signed up 20-30 participants in the Women on the Go program.

Judge Harbison stated hopefully the world would be right again by the time the group reaches its 50th year and it could be honored with a large gathering of people.

A motion by the commissioners carried to approve the proclamation as read.

Other members of the group present with Manning were Peaches Conway, Bobbie Nutt, and Annette Jackson.

Karren Price, 123rd District Attorney, spoke with the commissioners about the need of county constables to have body cams.

"I realize that you probably know already that everybody who is working in law enforcement needs to have a body camera on these days," said Price. "Somehow we've managed not to provide those for constables and I frankly didn't know they had already approached you about it."

During discussion it was determined Josh Tipton, Constable 5, does have a body cam which he purchased himself.

Price elaborated on the issue of safety for the officers, accountability factor, and liability for the county if anything were to go awry, and then evidentiary value should a case be presented in court and the video be useful as evidence.

"Law enforcement is the most dangerous job you can have, I think more dangerous than being a soldier in the United States Army," said Price.

Price mentioned the possibility of grants to fund the purchase the cameras, aside from the county making the purchase outright.

"They need it, we need it, and folks on the ground need it. They need to know their guys are protected as we can make them when they're out there in the middle of the night doing their jobs," said Price. 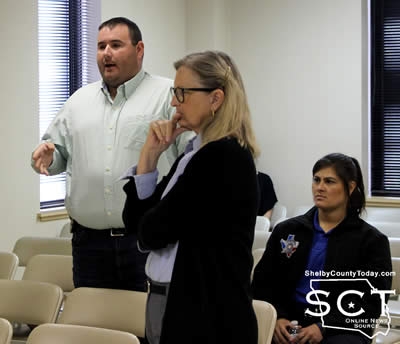 A motion to table the purchase of body cams for the constables until further information can be gathered was considered, but then passed until the next meeting.

"I guess I'm going to bring up something that I brought up last year. Today is the 13th of October, we started out new budget year on October 1st," said Tom Bellmyer, Commissioner Precinct 4. "We went through several workshops and budget meetings, and budget discussions, and that's why I was curious if this was a mandate that just came out of the latest legislature."

Bellmyer stated this is his third year through budget time and he said that every year within the first 30 days of being into the new budget high dollar items become apparent, outside of emergency situations. He encouraged everyone operating on the county budget to bring needed expenses to budget discussions during June and July to prevent having to come up with unexpected funding once again.

District Attorney Price discussed the new legislative mandate for a Sexual Assault Team that has to be in place by November 1, 2021 in Shelby County.

"They have billed us a requirement, every county to have a adult sexual assault response team that look very much like a Child Advocacy Center multi-disciplinary team," said Price. "They have legislated that the felony prosecutor's office will be represented, the sheriff will be represented, I read in that that the county judge is the chairperson of this committee and you all have to appoint some other members to this committee that serves as a multi-disciplinary team."

Price explained the team is to meet at least quarterly to discuss cases involving sexual assault of adults. She said she isn't certain what the goal of the legislature is beyond accountability to the county governing board to move the cases through the system.

"It's December 1 y'all are supposed to have a resolution in the court that you're forming one and then we have a whole year to draft protocols for the team reaction and should be for everybody involved in the team how we address ongoing issues of sexual assault of adults," said Price.

She said a report would have to be submitted every other year by commissioners' court to the state.

"I'm gonna guess that at some point down the road when they have enough data collected from the counties, they're going to tie that to some kind of money," said Price. "I don't know what kind of money they're going to tie it to, but there's going to be an accounting at some point, they're just gathering data right now to justify some kind of grab from the counties for expenditures."