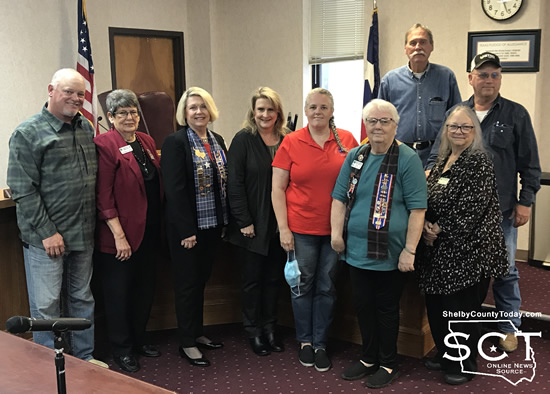 January 18, 2023 - The Commissioners’ Court held their first meeting of 2023 on January 4 and heard from representatives of the Paxton Water Corporation.

(Left) Stacy Cranford was the first to address the court regarding Paxton Water Supply.

Paxton Water Supply representatives Eric Garrett and Stacy Cranford addressed the court regarding water issues the Paxton/Jackson areas experienced over Christmas. Cranford spoke first, “I’ll kind of give you a run down of what transpired during our last freeze and to take away some of the misunderstanding about the way Jackson and Paxton operates. We have two separate water systems, we call it the Jackson side and the Paxton side, they are all under one umbrella but the Jackson side is basically everything off of Hwy 7 and Paxton is everything off of Hwy 84. The Jackson side off of Hwy 7 is 100% fed by water from Joaquin. We have no wells, we have no emergency backup, so if Joaquin goes down, then Jackson goes down. Paxton side has their own wells and they have Joaquin as emergency backup.”

Cranford continued explaining that he is also the Director of Public Works for the City of Joaquin. On Saturday, December 24, Christmas Eve, Joaquin was in good shape except they had two water wells that were down for repairs. Joaquin’s emergency backup is Logansport. “Perfect timing when [the freeze] happened. So, basically we were 100% reliant on Logansport. Well, Logansport had problems, they had turned the water off. It put us out of water at Joaquin and to that affect - we had to shut off the valve to Jackson. Jackson was out of water for four to five days completely, they had not a drop of water because we weren’t able to pressure up Joaquin’s system to get enough water from Logansport to pressure it up to send them any water. So, that really opened everybody’s eyes to say we’ve got to do something different.”

Cranford said they are looking at trying to drill several water wells and would welcome any assistance from the Commissioners’ Court to help. He mentioned there are grants available to the water supply system; however, the county would have to make the application because they are required to go through the county.

During discussion, it was mentioned both systems together serve a total of approximately 750 meters. Commissioner Stevie Smith said during the freeze and water outage he learned a lot and was shocked to discover the area did not have a water source on the Jackson side. Cranford explained the setup when he inherited the system, “They had did a big remodel on the plant, built a new storage tank, a new pressure tank, and built a new pump house and pump system. There was an old well at one time that I understand that was closer to Center on Hwy 7 and that well went bad. At the time that that well went bad was the time that they obviously had changed over to 100% Joaquin.” It was mentioned that the Paxton side has two wells. A pump at one of the Paxton wells went down during the freeze and had to be replaced during everything. Paxton had water outages during the freeze but nothing like the Jackson side experienced. 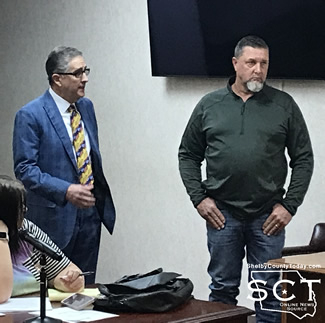 Eric Garrett added to the discussion, “I realize that the county cannot step up and support Paxton Water Supply. That’s not what we are asking. Not the approach at all. But where we are is with an older infrastructure system that we are maintaining, not enough water to meet the need, we have customers that at the moment or would be customers that are saying please give us water. There is no water to give them. If you can understand the mind, as someone that’s leading the corporation, I need to be selling these people water. That just helps to support the financial base of the corporation. It is a non-profit. We are not sitting on thousands and thousands of dollars in the bank, it’s pretty much a dollar comes in, a dollar goes out. And I understand that that is probably the case with a lot of rural water systems. I’ve got that. But during the crisis at Christmas, one of the questions that was posed to me numerous times was ‘why isn’t Logansport sending us water?’ That is the wrong question to be asking. The question to be asking is what are we doing to provide our own sustainable, clean drinking water?”

He finished by saying, “Water is not a luxury, it is an absolute necessity. And so, while we are not asking you to rescue Paxton Water Supply, I’m giving it my best, obviously I don’t get any money for what I do, I’m giving it my best, we are pulling it together, our financial basis is stronger than its ever been but there are some things it just won’t cover and this is one of them.”

Judge Harbison spoke saying she felt like the county would definitely support in applying for the CDBG (Community Development Block Grant) programs. Luciana Barr, Emergency Management Coordinator who was involved with helping Paxton/Jackson during the water outage said she had found three grant opportunities - the CDBG, Economically Distressed Area Program - Texas Water Development Board, and TCEQ’s Texas Optimization Program. She also recommended the Sabine River Authority for assistance. Garrett expressed, “Grants are a wonderful thing, if you ever get them. So, that is awesome, we want to apply for them. We will do anything you can point us to, we will be on with both feet. What we don’t need is a repeat of what we just went through so anything that this court could do to help us we would be very appreciative.” 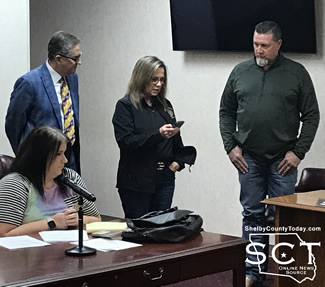 Discussion continued among the Commissioners and the water supply representatives. All agreed the water system needs water wells to help sustain it as well as possibly more water storage. If the system continues to 100% rely on Logansport, the rates will only continue to go up. Paxton Water Systems rates are already considerably higher than other water systems in the county. Commissioner Smith added, “If the water goes out and the lines go empty, as far as the Jackson side, all the water has got to come from Logansport.” The way the system currently works, Joaquin has to have a high enough water level to pressure the water to get up Lambert’s Hill to the booster station. “The Jackson side was out for six days and had it not been for all the fire departments and volunteer firemen coming together to haul water out there to the tank, they would have been out… [another two or three days]”

The Commissioners’ Court were in agreement. Commissioner Roscoe McSwain added, “I’m sure the court is more than happy to help move forward with this grant to get a well done but that don’t help in the immediate. We know how that works, that might be three years down the road, you might get [the grant], you might not… We are not talking about gasoline, or I can drive over yonder to get me some food, we are talking about water to drink and to wash with, that is the last thing that you want to be without. And as a county, we are standing on funds that we are going to help other entities with in the same situation but they’re not down. They are still limping. So, I don’t know why this court wouldn’t be open to us to get a project together, a plan, to at least make a step forward. I beg anyone to tell me something more important we can do with some of this money from the federal government than to drill a well and to help with water.”

Cranford advised their engineer has already started working on paperwork to get an emergency well. Garrett said they are doing everything they can to be proactive.

County Auditor Clint Porterfield spoke up concerning funds for the project, “It’s not beyond the authority of this court to make an emergency budget amendment and we could use fund balance to immediately start this project. We’ve been very fortunate that interest rates have gone back up. As the general fund goes, we have already made $150,000 in interest this year in three months. We have almost in interest alone which has not been budgeted. We have enough money to start this project. Consider the whole realm of our finances and what we can do in the timing of this emergency, whether that be going through the ARPA funds and doing the homework, and going or making an immediate impact with funds we have available outside of ARPA money.” “I just heard the number $250-$300 thousand, for what we do and what we have, that doesn’t break the bank for us. Whether we totally fund something or partially fund it, at least we can have an immediate impact, if you didn’t want to have to go through the delays of the administration of the grant funds and all that we know that’s involved with it.”

Judge Harbison recommended moving forward with trying to apply for the CDBG program. Commissioner Tom Bellmyer mentioned the water supply is already working on getting the emergency permit to start the process for a new water well and recommended Paxton Water Supply return next week to find out when the well can get started. “I support that, that exactly what Auditor Porterfield came up with, and it’s truly an emergency - drinking water as the other two Commissioners have expressed. It’s an emergency and I’ll make the comment we were blessed that we didn’t have a fire in those communities, because the thought hit me, its one thing to not have drinking water but to watch your house burn down because we can’t get adequate water to it would have been a heart breaker.”

All of the court was in agreement the situation was the perfect example of an emergency and Paxton Water Supply was invited to return next week to move forward.