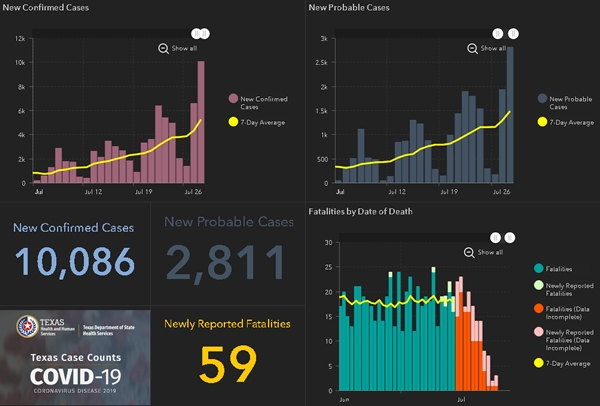 July 28, 2021 - According to the Texas DSHS Covid-19 Dashboard, Shelby County's Covid-19 new cases are trending upward along with the statewide numbers. Today, the state reported 10,086 new confirmed cases and 2,811 new probable cases; the highest numbers Texas has seen since February.

Since July 9, 2021, the county has seen a slow growth in new cases after a large increase the first week in July was reported. During the time from July 9 to July 26, the number of active cases remained in the teens or lower with a low of 7 active cases reported on July 18th and July 19th.

However, over the past 2 days, July 27 and July 28, the number of new cases rose by the same amount and active cases have doubled.

The estimated number of active cases is currently 28 which is the highest active cases count since April 25th.

July numbers so far are much less than they were in June. There are only 3 days of reporting left in July.

Editor's note: When the change in Covid-19 numbers is small, the Covid-19 report is delayed until a substantial increase or a new death is reported. Otherwise, stats will at least be reported monthly.