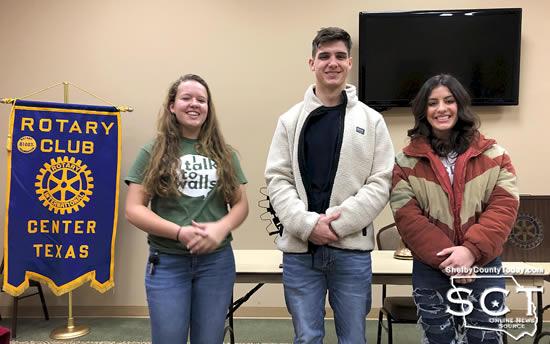 CISD junior Kristen Orsak spoke first about their adventure, “So we went to RYLA not this weekend, but the weekend before. We got there about 6:00 on Friday night and we didn’t leave until about 3:00 on Sunday at the Pineywoods Baptist Encampment. It was crazy jammed with all these events that we were doing, trust building exercises and everything else, and a bunch of motivational speakers that we [were] able to listen to from all over the state.“

Jake Liker, also a junior at Center, said, “It was fun getting to meet new people. Even still we made a bunch of group chats that you still connected with all those people we were with, things like that, built a lot of trust with them. [I] think that’s what was great about this, building trust with people that you didn’t know. That was good.”

The third junior who attended RYLA was Kennedy Bush. She said, “One of my favorites was we did a ropes course, but is more like a trust and leadership thing. So, you have to get your group and find out a way to get over this giant wall and you had to communicate, but you had to do it quietly and listen to everyone and it was really fun.”

Kristen Orsak added concerning the other campers she met, “You are all involved in a crazy amount of stuff at school, you all have crazy schedules, and crazy lives and everything else and all of you aspire to be the best leader you can be, and so when you go and meet all these people, there is no differences between you, so that connection is just so more genuine than just basic school work and that sort of thing.”

Jake Liker spoke at the end of the program saying, “I just want to say thank you as well for sponsoring us to go, that’s a big part of it.”

During a question and answer portion of the program, one Rotarian asked if they had learned much about Rotary at the camp.

Kristen Orsak answered, “They did actually. We had a whole hour long speech on the four way test, what that means, where it came from and where it originated, and on top of that, we had a lot of people that were Rotary members from all over our district and from all of them, we were able to see how they had been a part of the Rotary Club, what status they had in the Rotary Club, and all sorts of things. We met people from Rotaract, which is the college version, if I’m not mistaken and those people were helping us with the events as well and we got to meet all these really high up people in the Rotary chain and everything else. We had them talking about what made (them) want to join Rotary to begin with, so we sort of learned how they became leaders themselves and how we can pushed ourselves to do the same thing, which was a lot of fun.”

Another Rotarian asked a question for each of the students, “If you take away one thing from the weekend, what would that be?”

Jake Liker answered, “It’s not about what you know, but it’s about who you know.”

Kennedy Bush said, “Just learning to listen to everyone’s input so you can work together and get the job done.”

Rotary Club President Collin Mathews said, “That’s exciting. We’re glad you all had a great time and it was an honor to send some kids that are so passionate about learning about RYLA and Rotary and what we are all about.”

About Rotary Youth Leadership Awards
Rotary Youth Leadership Awards (RYLA) is an intensive leadership experience organized by Rotary clubs and districts where you develop your skills as a leader while having fun and making connections. RLYA benefits include connecting with leaders in your community and around the world, building communication and problem-solving skills, discovering strategies for becoming a dynamic leader in your school or community, learning from community leaders, inspirational speakers, and peer mentors, unlocking your potential to turning motivation into action and having fun and forming lasting friendships.

About Rotary
Rotary is a global network of 1.2 million neighbors, friends, leaders, and problem-solvers who see a world where people unite and take action to create lasting change – across the globe, in our communities, and in ourselves. Solving real problems takes real commitment and vision. For more than 110 years, Rotary's people of action have used their passion, energy, and intelligence to take action on sustainable projects. From literacy and peace to water and health, they are always working to better our world, and we stay committed to the end. Rotary’s mission is to provide service to others, promote integrity, and advance world understanding, goodwill, and peace through our fellowship of business, professional, and community leaders.