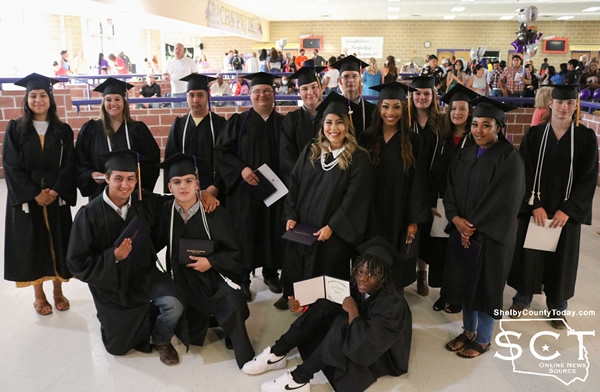 June 9, 2022 (More Photos) - The Roughrider Academy Spring Class of 2022 turned their tassels at the end of their commencement ceremony on June 2, 2022 signifying graduates becoming alumni. Of the 16 graduates, 3 received recognition for dual college credits, 8 received special certifications, and 3 join the military. Among the class, 6 graduates received scholarships to continue their education at the next level. 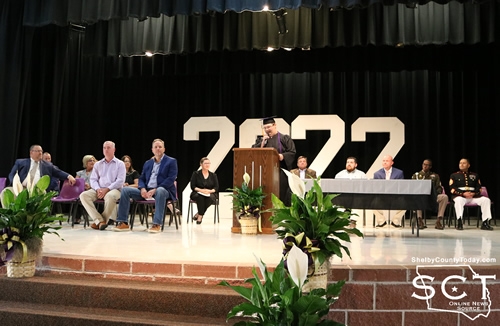 Speaking on behalf of the Roughrider Academy Spring Class of 2022 was Harrison Lee. “Tonight I will be speaking about what Roughrider Academy means to me but also a little about hope. Like many others I came to Roughrider Academy seeking a refuge. I sought a place where I could take a break or in essence an easier path and what I discovered wasn’t a magical place of rest, not a place for me to relax or take my time. But what I found was so much better. By joining Roughrider Academy I thought I was running away but instead of protecting me from the world, it was preparing me for it. When I came to Roughrider Academy, I was a completely different person, as anyone can tell you. I was shy and angry at the world, had long since given up on trying in school and thought that I would graduate in the bottom of my class. By Christmas break of 2019, I was at rock bottom, the lowest of my lows. But that was when I first heard of Roughrider Academy. I joined in the spring of 2020, and what a trip that was. With the beginning of quarantine came a new chapter in my life, suddenly I was in a new school and then a month later I was at home, still trying to figure out how to do my school work. But it was because of those struggles and the push from my teachers that I learned to thrive in my new environment. Everyday and from everyone, I was prepared for my future, even if I didn’t know it at first.” Ending his speech, Lee read from the poem “Hope is the thing with feathers” by Emily Dickinson, “To me this poem means a lot of different things, but most importantly it means that hope will never die. Fellow graduates, I know that our journey has been a tough one. But I beg you that you never give up your hope. Never give up hope in yourselves or in others.”

During the ceremony Heath Hagler, Director of Roughrider Academy, was excited to report a new partnership with a local company, “This past year we were able to build a strong partnership with Smith Sawmill Service after a former Center graduate, Mr. Dustin Norris, who is also the General Manager, he actually reached out to me to explore future possibilities for students.”

Smith Sawmill Service is a premier saw manufacturing and service company located in Timpson, Texas since 1990. They employ over 150 people and have three locations in Texas, Louisiana, and North Carolina.

“Since we met, we took some students out to tour the plant and walk through and since that point, they’ve actually hired three of our students to work at their plant. And these jobs are not just jobs, they are career type jobs with an opportunity for growth. Mr. Norris reported to me that our students are doing great. Additionally they are working with a local sawmill that has purchased some equipment from Smith Sawmill, some higher technology equipment, and they are actually going to be hiring one of our students to come run the equipment that they sold them. The customer was so excited to learn that they could provide them with young, pre-trained employees to run the equipment. Creating jobs through partnerships and helping our kids and our community grow. We are very, very excited about that. We want to say thank you to Mr. Norris and also our sawmill service for the partnership and I look forward to us being able to work together in the future to be able to provide opportunities for our students to positively impact themselves and our community.”

Frank Parker, a representative with the Roughrider Scholarship Foundation, presented scholarships to students, “It’s an honor to be here to see what these kids have accomplished.” He spoke about the interview process and how much he enjoyed meeting with the students and encouraged them in their future endeavors. Graduates receiving the scholarships were Richard Harrison Lee, Jakevious Ty’Quin Moore, Jewell Latrisse Patton, Savannah Hope Showalter, Dakota Lane Snyder, and Jamie Nicole Stotts.

Cancee Lester, the Director of Panola College - Shelby County Operations, presented scholarships “First and foremost I want to congratulate all of you graduating seniors and on behalf of Panola College its my honor to present the following scholarship awards. The Panola Leadership Scholarship is presented to an outstanding graduating senior that has been selected by their high school administrator and this scholarship will pay all tuition short of fees for the semester following graduation and I believe it is also renewable if enrolled in at least 12 hours the following semester. So this years recipient from the Roughrider Academy goes to Jamie Stotts.” She added, “I would also like to present a Gas Compressor Association Scholarship to Richard Lee.” 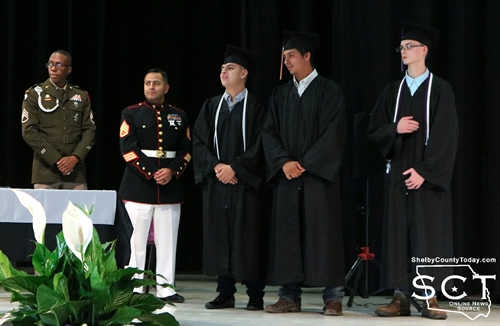 The graduates of Roughrider Academy Spring Class of 2022 are:

Hagler gave special recognition of graduate Dalton Virgil Sloan who graduated from Panola before graduating from High School and who was the first student graduating from Roughrider Academy to receive all three cords offered.

At the beginning of the commencement, recognition was given to Center ISD School Board members, Superintendent Dr. Brian Morris, and Assistant Superintendent Jake Henson. Hagler stated, “Roughrider Academy is a very special place. Our community is very blessed to have this school. Without all these people, our campus would not exist. Because of their vision, support, and commitment, this program continues to grow and flourish.”

Final appreciation was given to the teachers and the staff of Roughrider Academy, “These are some of the most dedicated and compassionate people that I have had the privilege to work with in my 20-plus years in education. They love their students and it shows in their actions every single day.” Teachers are Virginia Fischer, John Jackson, Erica Klein, and Jody Stephens. Instructional support team is Beatriz Contreras Mendoza and Dustin Mendoza. Campus Counselor is Cindy Tillery.