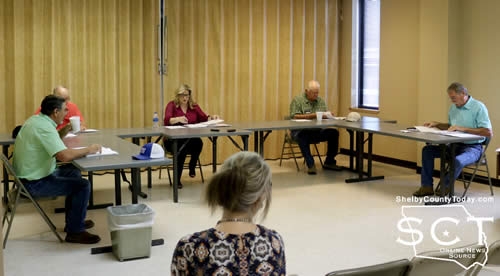 Shelby County Commissioners were compelled to make an expensive investment when faced with the possibility of the jail being shut down if the infraction isn't addressed.

According to the Texas Department of Jail Standards (TDJS) jail inspection report, during a walk-through of the facility, it was identified that the secure jail doors have false secured door indicators on the control board.

The other error the TDJS noted was a review of medical files indicated that staff are not properly filling out the screening for suicide and medical/mental/developmental impairments in its entirety and making notifications as required.

The second issue was not addressed in court; however, the jail door locks were discussed at length. 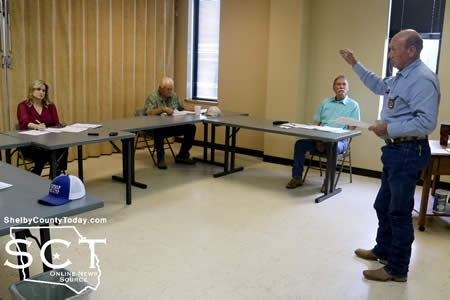 "This bid is for all 55 locks in the jail, 33 of which are sending the signal to the jail board that says the door's open. The door is not open, but it's been that way for the last 12, 13 years," said Sheriff Willis Blackwell.

Why so many door locks would be left in that condition for more than a decade, or weren't repaired as they became an issue, or replaced, wasn't elaborated on. According to Blackwell a company in Pennsylvania has the parts needed for the current locks, which they can work on, but the jail would have to send all 55 locks to Pennsylvania for the repairs.

Blackwell stated the locks have been in the jail since 1984, 36 years ago. 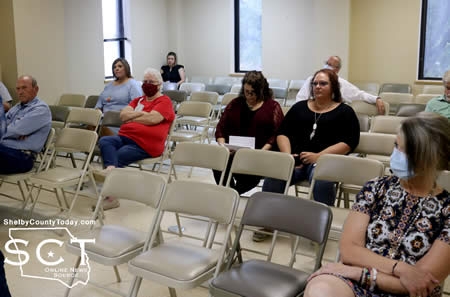 "This has been the case for 13 years and all of a sudden now they want the county to spend $108,000 to fix something that's really not the problem or shut the jail down and spend $7,000 - $8,000 a day on prisoners," said Roscoe McSwain, commissioner.

Blackwell remarked the inspector no longer works for TDJS, and now works for Smith County Jail where they had a similar problem to Shelby County involving their locks.

Members of the Shelby County Historical Commission (SCHC) participated in the meeting and had several items involving the Courthouse Annex building (Old Clerk's Building) and Tower Clock located on the Center square. Teddy Hopkins, SCHC Chairman, was the representative who spoke with the commissioners. 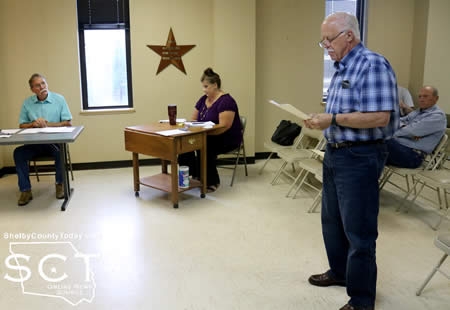 "May 20th, Jay Firsching a consultant, (Senior Historic Preservation Specialist) and his team came down for a site visit to accumulate various information about the nuts and bolts of the, Annex Building. Taking pictures and measurements of the building internally and externally," said Hopkins. "I am excited that we are beginning to see this dream of a Shelby County museum taking shape in our county. Not only have we, the commission been in contact with Architexas in regards to the master plan, we have been seeking and getting an understanding of what would potentially be the next step in the courthouse and its project."

The SCHC requested permission for the Shelby County Commissioner's Court to agree for the county to pay for the testing. Brady Environmental Services, Inc. out of Lyndell provided an estimate for the testing totaling $2,295. The mold test is $300, lead $820 and asbestos $1,175.

A motion carried to approve Brady Environmental Services, Inc. to perform the testing on behalf of the SCHC at a cost of $2,295.

Hopkins went on to speak with the commissioners about the Shelby County Courthouse square Tower Clock and proposed repair.

"We learned that you know this antique is not an easy fix, since the clock has been inoperable for a number of years. We feel it would compliment the present streetscape project the City of Center has initiated," said Hopkins. "To restore the clock, having said that, we the commission have solicited bids for the restoration of the clock."

The SCHC requested the county retain Tower Clocks USA to restore the clock on the North side of the Shelby County courtyard square at a cost of $8,990.

There are two parts to the project of returning the clock to functionality. One would be to restore the tower post at a cost of $975 to powder coat the cast iron post through Sadler Powder Coating in Henderson. 30 days following installation of the tower post, the clock will be returned to be installed.

Hopkins requested on behalf of the SCHC that Shelby County pay $975 for the tower post restoration and $8,990 for the clock restoration. The SCHC will then reimburse the county $4,495 of the total.

A motion carried to restore the clock, tower post, and move the clock.

Rayford Copelin, another member of the SCHC, mentioned in doing research the clock is one of 64 in the United States. 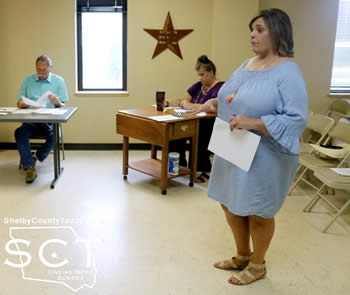 Donna Hughes, Justice of the Peace Precinct 1, addressed the court to request products for the new building where her office is located. She said it's a necessity to have three rugs which would be cleaned by an outside service, and which she said can be maintained for the remained of the month within her office.

"On top of that, we're asking since we're having court there, we've got that centrally located restroom. We're going to be required to allow visitors to use our facilities. We're asking for the hygiene products also, and I think it's cheaper than we can possibly even go to the dollar store and buy stuff, but they're going to be providing the hand sanitizing, the GermX."

Judge Hughes explained they will be sanitizing the courtroom in between hearings as well.

"We're going to have to wipe down the whole courtroom each between hearings, but we're also going to help. They'll supply the GermX gel sanitizer and a dispenser, so that people coming in and out [can use it]," said Judge Hughes. "We're going to require that they wear a mask to court, that they can only bring one person with them, and that we're going to strongly recommend using the hand sanitizer."

Judge Hughes stated her office has sent a letter setting their first hearings up for evictions on July 2, and they're setting them for an hour apart.

A motion carried to approve allowing the Justice of the Peace Precinct 1 office to get the rug service and cleaning supplies.

Having a new location rented for the new JP is one reason Barr said he felt plans are necessary; however, until someone is in that building, he said records can't be moved there.

Hughes said she will help with what necessary procedures there are in dealing with the records from Anderson's office.

"We love her, we're going to miss her, but we will help her," said Hughes.

There was additional discussion about the records; however, the commissioners took no action on the item at this time.

Judge Harbison presented a proposal from Encore Music Co. in Nacogdoches for upgrading sound equipment in the District courtrooms. With the amount of money the commissioners already approved during the meeting, McSwain suggested looking at budgeting those upgrades for the next budget year.

The meeting was adjourned at 10:50am.