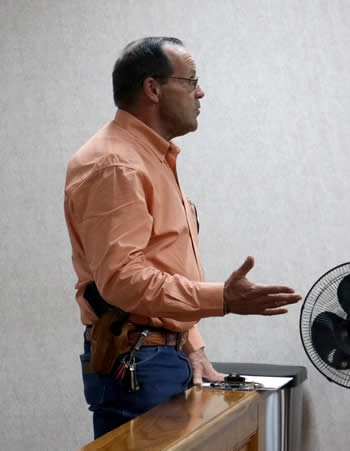 July 22, 2021 - Sheriff Kevin Windham explained his goal during the July 21, Commissioners' Court meeting to install GPS trackers on all of the Sheriff's Department patrol units through a company called Samsara.

"One of our concerns of course is safety, if something was to happen then we can locate you know, where our unit is at," said Sheriff Windham.

Sheriff Windham described how the patrol units can be located in real time to see their exact location, helping other officers to respond and assist an officer in need more quickly and efficiently without having to determine their location.

"Not only is it a safety issue, but it's also an issue that ensures that our patrol deputies are doing what they are supposed to be doing," said Sheriff Windham. "I want to make sure that our entire county is covered. I don't want them to get into a routine of just staying in one certain area over and over."

Commissioner Stevie Smith asked if the information could be viewed on a smartphone app, and Lt. Tanner Peace confirmed that is an available option, which could even be available to officers.

"It's come in fairly handy because, you know with the radios still down, if they're trying to get to a disturbance call one of them can call dispatch because dispatch has access to the GPS map as well and say, 'hey, how far am I from this person's location,'" said Lt. Peace.

Lt. Peace also stated it helps keep a detailed log of maintenance on the vehicle including when the engine is running, idle, mileage, gasoline, speed, and barometric pressure around the vehicle.

Commissioner Smith asked about the security of this system and if unwanted individuals could gain access. Lt. Peace and Sheriff Windham said they couldn't and would have to be given access to the website by an administrator.

Sheriff Windham confirmed with Commissioner Roscoe McSwain the cost under the current budget could be absorbed by his department's budget.

A motion carried to authorize the payment of $2,543.80 for the first year of the GPS units with Samsara.

He explained the same resolution was before the court and approved in February of 2020; however, that transaction was halted due to the COVID-19 pandemic.

Benavides stated they have to go through the same process for all 28 facilities, including the unnamed facility in Shelby County. He stated the approval is for the purposes of the Internal Revenue Service code to qualify the bonds as tax exempt.

"Those are bonds of the bar where the nursing home operator will be obligated for those bonds. Shelby County will not have any obligation with respect to the bonds or the facility. The approval today is just for the purposes of authorizing, letting them move forward to issue the bonds on a tax exempt basis," said Benavides.