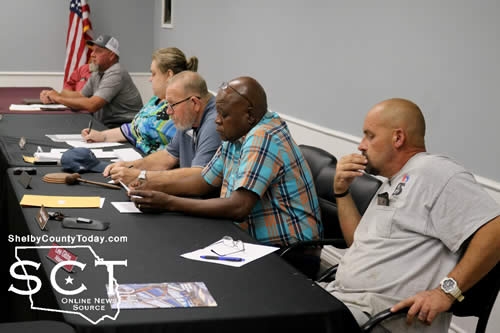 July 11, 2020 - The Tenaha City Council was bombarded by statements of Tenaha residents unhappy with their law enforcement during their meeting held June 22, 2020 following statements made by the police chief via social media.

Although Statements were made directed toward the police department and its activities, no representative of the department was present to address any of the voiced issues.

The statements made during the public meeting are that of the speakers and not necessarily of Shelby County Today. 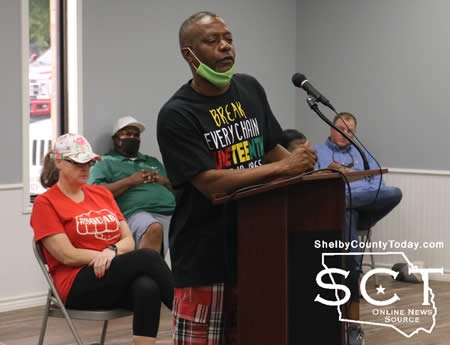 "I don't know who hired him to be the police chief of Tenaha, but he is not accepted and with the words he put on facebook," said Desmond Steadman. "You know, I got grandkids and y'all look at your grandkids too, if you got any grandkids look at your grandkids with what he said he didn't mind shooting them. I think he don't need to be around our kids. You know, it comes to me you're here to protect us, you're not here to kill us." 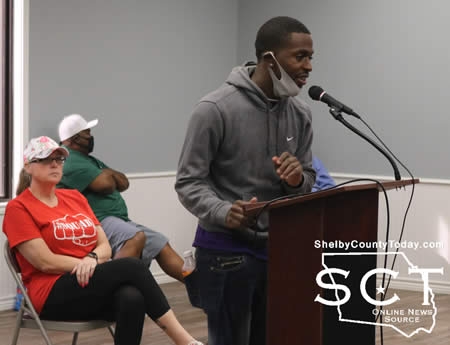 Ja'Mon Moore
"It's easy to post on Facebook, it's easy to talk in a group, but most people won't man up and come say straight up take the stand," said Moore. "Like the man from Joaquin said, we've got so many police cars, you come through they're not even used cars these are brand new cars. When you've got a town, where you're in Tenaha, I'm just asking why we've got that many policemen."

Moore said he would like to see more improvements in parts of Tenaha rather than more police cars.

"I feel like kids should be able to grow, have a park like Center Portacool Park, put some goals down there. We can start doing something. I saw a few guys a couple years ago cleaning up the park," said Moore. 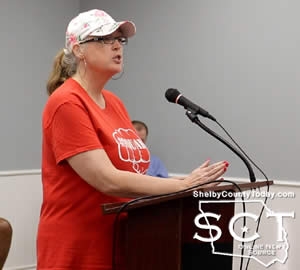 Susie Crawford
It bothers me when I see someone who is in a position of authority, who number one doesn't bother to show up for the meeting so that is an issue. You said what you said on Facebook and you were proud of it, because not only did you make one post you continued on to post on other websites," said Crawford. "It is a disgrace, and it is a poor representation of what the community of Tenaha stands for."

She continued by suggesting there is discrimination involving law enforcement in Tenaha and minorities who travel through the city.

"I will not stand for black kids to be afraid in their own community," said Crawford.

Other public statements made to the council were by Mike Cummings, Jr., Joaquin City Councilman, and Tenaha resident Cliff Lloyd.

Cummings reiterated from a previous meeting the interest of the city of Joaquin in purchaing one of the city of Tenaha patrol units. Lloyd is still looking forward to seeing activity on property donated for the city to use as a park.

Regarding the items included in those items listed as Consent Agenda items Amanda Treat, City Secretary, described the nature of these items.

Treat stated, according to the records of 1st National Bank of Hughes Springs June 25, 2020 will be the city's last payment on a loan for a tractor.

The Tenaha City Office was scheduled to be closed Friday, July 3, 2020.

In addressing employee vacation time, Treat explained for the council the item was included on the agenda to help make the council aware of when certain employees would be off work.

One employee for the city was seeking the week of the 6th to the 10th off. Treat explained the anniversary of his two-year employment would be on July 1, he would be eligible for two weeks, but he only wanted to take one.

Durand Steadman, alderman, disagreed with him having two weeks after only being employed with the city for two years and he questioned how that was correct. Treat referenced the city employee handbook. Elizabeth Swint, after having been employed by the city for 10 years, is eligible for three weeks vacation and requested two days. Steadman said she should take a whole week and not split it by days, because that would be difficult to keep up with.

Treat acknowledged she also was seeking to take two days; however, she realized by that time the council was not going to accept her request. Steadman said they wouldn't be splitting up vacation time in that way unless there was some kind of emergency.

"We're not going to split it up like that," said Steadman. "We're losing track of this vacation, their just taking vacation days."

A motion carried to table the employee vacation days until a later time.

The City of Tenaha received one bid for the construction of a pumper truck and a brush truck for the Tenaha Volunteer Fire Department. The only bid received was from Deep South Fire Trucks. A motion carried to award the contract for the construction and delivery of a pumper truck and brush truck through CDBG FAST Grant 7219256 to Deep South Fire Trucks.

Discussed at length during the meeting was the potential purchase of a backhoe from the police department by the General, Wastewater, Water and Street Departments. With the police chief being absent from the meeting, Stacy Cranford explained more in detail the circumstances surrounding the backhoe.

"The police department's been given a backhoe and after that one year period that they got it from Red River Depot, the army depot, it becomes their property," said Cranford.

Treat reitereated to the council the city has three notes to pay on police cars which were due on June 15.

"If the other departments could purchase that, that would give me the money to pay for those three units," said Treat.

"They're basically wanted us to pay on their note, because they're in a bind," said Cranford.

Steadman stated the chief told the council the city would be given the backhoe after a year and Cranford agreed the original plan was for the old backhoe would be given to the police department so they could auction it off as part of that exchange.

"We need to purchase a backhoe, I have no problem with that part, I would rather purchase it and be done with it and we have a backhoe we don't have to ask permission to use," said Cranford.

Steadman asked how much the police department was asking for the backhoe and Treat said "$45,000."

Lee Gibbs asked Cranford what the backhoe is worth and he said it is probably worth around $35,000. He said he had commented to Chief Pope when the machine was acquired by the police department what a great deal they had gotten and that it was worth $30,000 to $40,000.

"It's a good machine we've actually spent the money to fix it, because it had several issues whenever they received it and my department has actually packed the cylinders on there and got everything fixed to where it's in usable shape," said Cranford.

Cranford said around $2,000 has been spent on those repairs. The old machine is still usable; however, it's only useful for nominal tasks. If the city doesn't have the $45,000, Cranford asked how the notes would be paid on the patrol units.

Cranford remarked the cost of the machine is around half of what a new unit would cost and the city could get 20-25 years of service out of the one from the police department.

Treat remarked she felt comfortable with the $35,000 and that there is $18,799.38 in the police department "Rainy Day Fund" and the city is under on projected fines.

A motion carried to table the purchase of the backhoe.

"Regarding item 14, with Ms. Treat's annual evaluation of course she passed everything with gold stars and we have tabled the discussion on the sale of the Tahoe until we some more update on what's owed against it and what have you," said Florance Adams, Alderman.