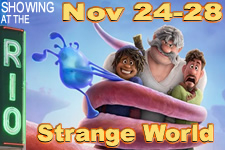 We would like to thank all of you for your continued support of the Rio and wish all of you a blessed & Happy Thanksgiving!
Mike & Nita Adkison