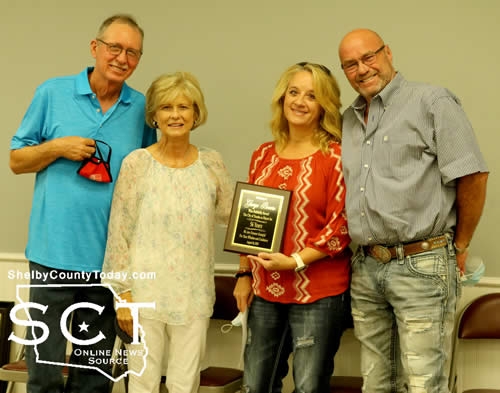 September 22, 2020 - Family members of former Tenaha mayor George Bowers were present for the August 24, 2020 Tenaha City Council meeting, and were presented an honor recognizing the service of Bowers who was laid to rest Tuesday, August 4, 2020.

At the beginning of the meeting, City Secretary Amanda Treat spoke and presented the family with a plaque on behalf of the city,

"George N. Bowers was born and raised on a farm in the Cedar Yard Community halfway between Tenaha and Center. He graduated from Center High School. He served his country in the Navy during World War II. After his discharge from the Navy he was drafted into the Army during the Korean War and served as a machine gunner. After serving his country, he moved back home and married Laura Peddy, which they have two children Theresa and Naylor, who both grew up in Tenaha. 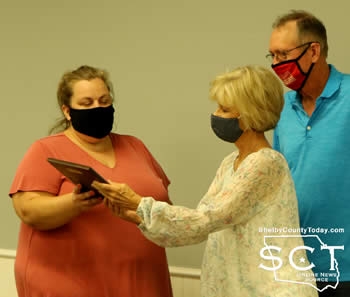 "George started Tenaha Milling Company, a feed store business along with his father-in-law. He later sold the business and worked in the post office. George and Laura had a retail business on the [Tenaha] square. He was active in the Tenaha Businessman's Club, Tenaha Quarterback Club and the Tenaha Industrial Foundation as well as other civic duties. He worked within these organizations to better the community. He was instrumental in getting doctors in town, a pharmacy, the Hope Clinic and several businesses.

"He was a director and one of the founders of Citizens State Bank, which he served in for 64 years. George Bowers was an active man who wanted to serve the community he lived in. George Bowers, in addition to these other services, ran for and was elected mayor of Tenaha, he served the town well for over 50 years, he was the longest serving mayor in Texas. He guided the city effectively through good times and troubled times. His pay for this work was he got his water bill free. George Bowers was a man of integrity and served Tenaha in many different capacities to the best of his ability. He is well-deserving of the recognition of his service." 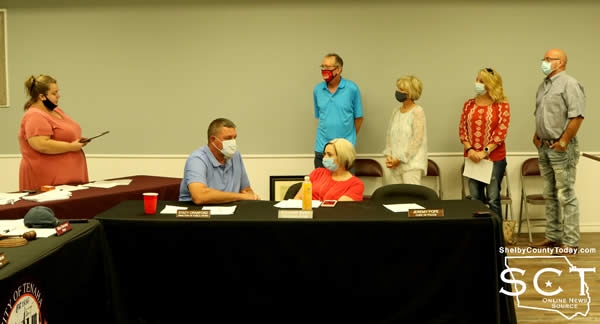 Treat then stated on behalf of the Tenaha City Council, mayor, and city employees they were presenting the family with a plaque which read as follows:

"In memory of George Bowers, who faithfully served the city of Tenaha as mayor for 56 years. We are forever grateful for his wisdom and guidance. Presented to the Bowers family this day August 24, 2020." 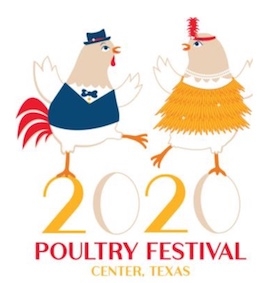 September 22, 2020 - Why did the chicken cross the road? To run in the 2020 East Texas Poultry Festival 5K Chicken Trot. Join us again this year for the 9th Annual 5K Chicken Trot on Saturday, October 3rd at 7:30am on the Center Downtown Square in front of All Hours Fitness. It is always a fun event, with proceeds going toward Health Screenings at the Annual Health and Fitness Fair. Register now, and join the fun!

It is not too late sign up. Registration fee is $30 and includes an entrance button to the Festival, good for all three days.

The Chicken Trot is Sponsored by Badders Law Firm and Presented by 936 Crossfit.

For more information contact the Shelby County Chamber of Commerce at 936-598-3682 or info@shelbycountychamber.com.

The 44th Annual East Texas Poultry Festival, presented by Farmers State Bank, begins with the Opening Ceremonies, sponsored by Focus Care of Center at 10:00 a.m. on Thursday, October 1st and runs through Saturday, October 3rd at the Windham Civic Center. Gold Sponsors for the Festival are: The City of Center, Pilgrims Pride and Tyson Foods.

September 19, 2020 - Yesterday afternoon, [September 18], there was an accident in which my brother was working on his truck and it rolled over on him. Upon calling 911, within minutes, [and I mean minutes], there were at least 10 first responders on the scene including an ambulance, Center FD, VFD, West Shelby VFD, and Shelby S.O.

It gives us all here in Shelby County a real peace of mind to know that our First Responders are here when we need them. I would sincerely like to thank them for their service to our community. If you see one, you thank them too. 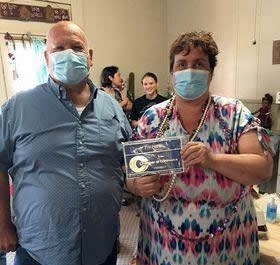 September 18, 2020 - Thanks to a good number of attendees Timpson new business Great Giftables is now open for business. Everyone gathered around during the ribbon cutting and then enjoyed delicious snacks while looking over the many different arts and crafts that’s neatly arranged in the new store. Laurie invites all to come by and browse the store that’s full of treasures from all around East Texas. You will be sure to find some interesting items that you would want to take home. We hope you will stop in to support this new business to a good start. Local business makes up the structure that keeps Timpson in business. 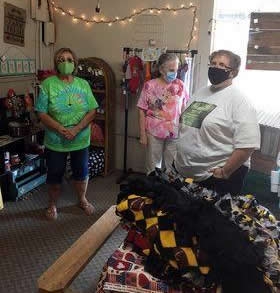 A Little About Great Giftables:
Great Giftables is an arts and crafts consignment store focusing on East Texas and Shelby County craftsmen and women. Primarily we have items from area crafters and a nice variety of goods for sale. We offer hand-made, re-purposed, and refinished items as well as unique finds and practically new items. We are not a resale shop! We are a shop of unique creations and discoveries. Please come and see what we have to offer! Store hours will be Monday through Friday 10am – 7pm, Saturday and Sunday 1pm until 7pm. We are located on the downtown square in Timpson at 191 Bremond in Timpson. Call 936-254-0006 or email atsadoozygifts@yahoo.com. Proprietor: Laurie McDonald; VP of Everything: LaQuita Caraway and Kayla G (Curator & Creator) along with Ellie M. (Curator, Collector & Creator). 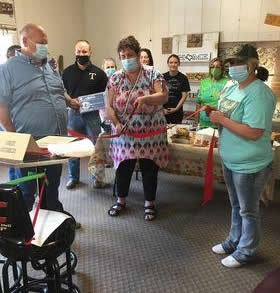 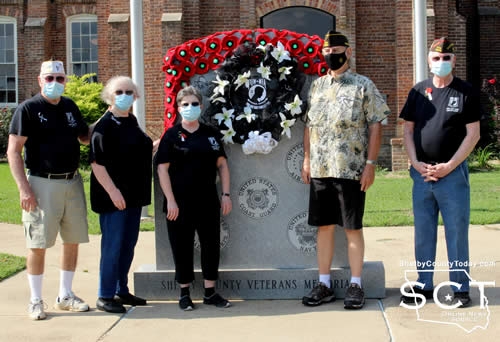 Although the program was somewhat overshadowed by the sounds of construction in progress on the Center square, the VFW Post 8904 members pushed through and honored those who were held captive and returned, as well as those who remain missing. 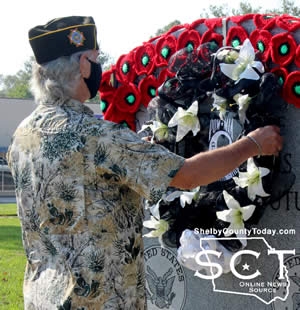 Larry Hume, Post Quartermaster, opened the program and led the gathering in a prayer. This was followed by the Pledge of Allegiance to our nation's flag.

"We salute the men and women who served to keep America free, and in doing so they sacrifieced their own lives," said Hume. "As we remember the families of the missing, we continue to hope and pray that they will one day return." 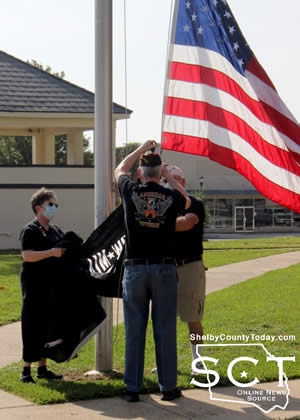 The VFW then lowered the flags and replaced the POW/MIA flag with a new one. Taps was then played as presented by Gene Hutto, VFW Post member. 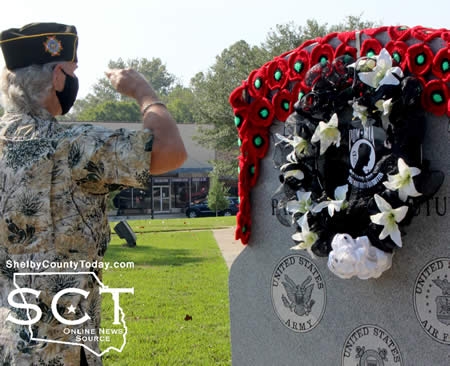 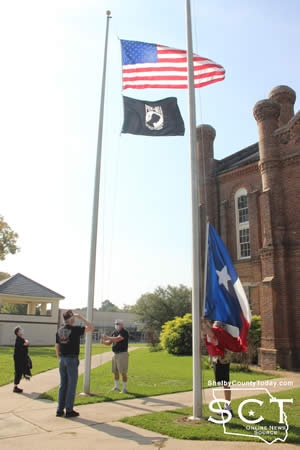 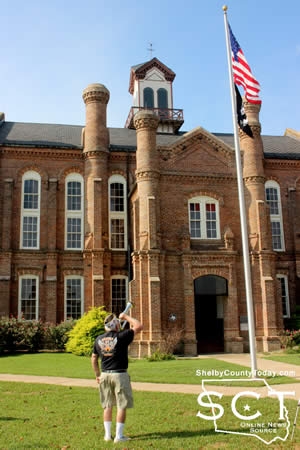 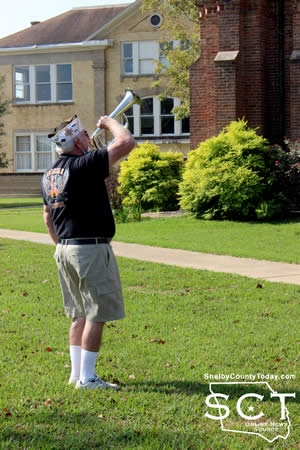 September 15, 2020 - The United States’ National POW/MIA Recognition Day is observed across the nation on the third Friday of September each year. Americans take the time to remember those who are or were at one time prisoners of war (POW) and those who are still missing in action (MIA), as well as their families. National POW/MIA Recognition Day is not a federal public holiday in the United States but it is a national observance.

Shelby County Memorial Veterans of Foreign Wars Post 8904 and the Auxiliary will conduct a remembrance program Friday, September 18th, 2020, 10:00 a.m. at the Veterans Memorial, 1885 Historic Courthouse in Center. The POW/MIA Flag that has flown there 24/7 for the last year will be retired and a new one hoisted. 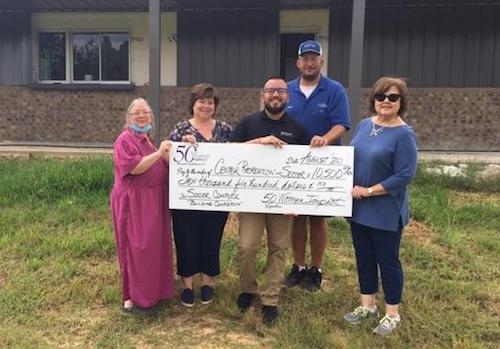 September 13, 2020 - Shelby County Youth Soccer is the fastest growing sport that the City Recreation Department oversees. The City of Center and SCYS are converting the Old Community Park into a soccer complex to serve youth and their families in Shelby County. The $10,500.00 grant award will provide funds needed to finish the Concession/Bathrooms at the Soccer Complex; the complex will provide a location for the youth soccer league teams to play as well as opportunities to host tournaments.

With this 12th grant award, the 50 Women Impact group has awarded grants totaling $120,100.00 to Shelby County non-profits. The group is open for members who want to be a part of a group committed to providing support to the non-profit organizations making a positive difference in in Shelby County! 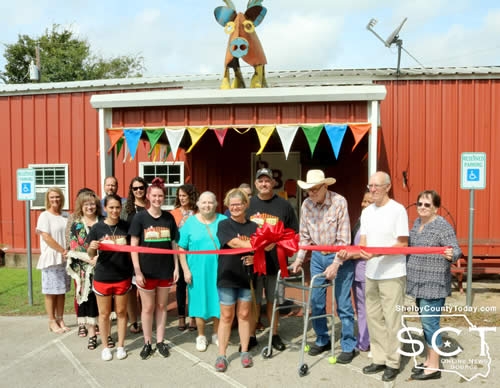 "Welcome everybody, this is a milestone in our lives," said Diana Pearce.

She explained her husband, Billy Jack, has worked away from home for the past 18 years and they now have the opportunity to open the restaurant, which also gives him the ability to be home. 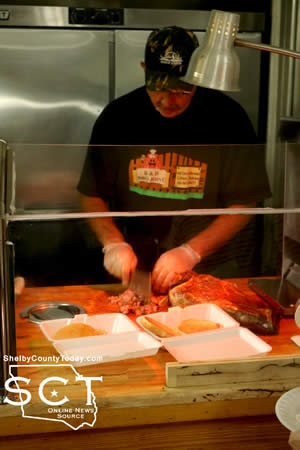 Pearce introduced several of their staff members and family present for the ribbon cutting.

The event was graced with the presence of Harry Murdock, who first established Harry's Smokehouse at the same location years ago.

B&D BBQ Joint's hours of operation are Monday through Friday from 11am until 7pm. The business is located at 500 Cora Street in Center and their phone number is 936-591-8827. 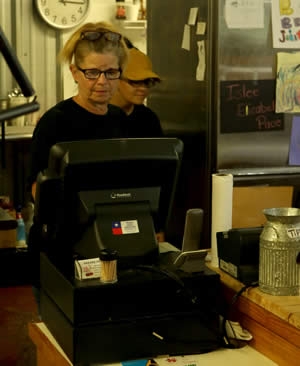 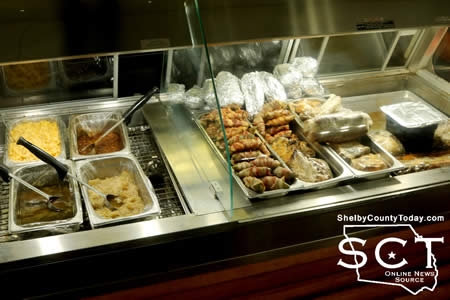 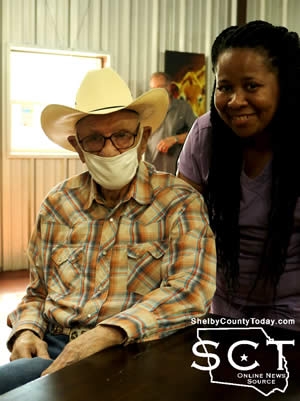 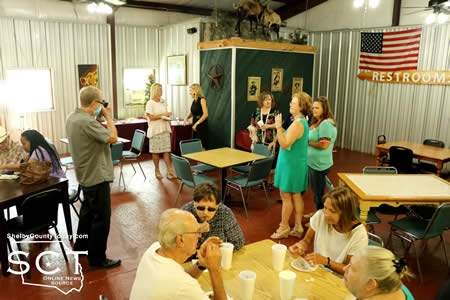 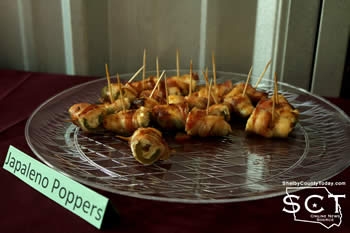 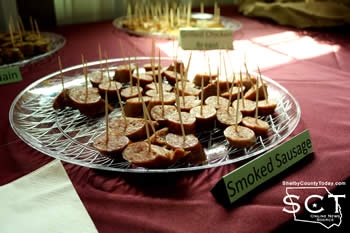 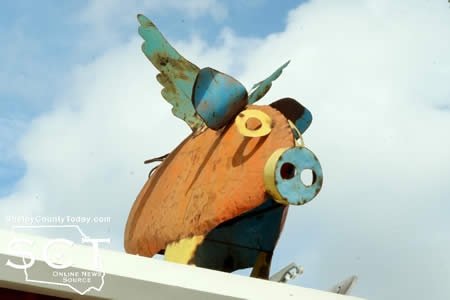 September 10, 2020 - The Shelby County Children’s Advocacy Center received a grant in the amount of $20,000 from T.L.L. Temple Foundation for general operating expenses over the next year. T.L.L. Temple Foundation recognizes that the pandemic has impacted many businesses. This is especially true for nonprofits, which depend on grants, donations, and fundraisers to cover the cost of operations. This grant is a tremendous benefit to the SCCAC as we work to meet the needs of child victims of abuse and neglect in our community.

The T.L.L. Temple Foundation works alongside families and communities to build a thriving Deep East Texas and to alleviate poverty, creating access and opportunities for all. In support of its mission, the foundation makes grants in the areas of education, economic development and community revitalization, health, human services, arts and culture, and conservation and the environment.