November 4, 2022 - Although the Center Recreation Department signup days have passed for the 2023 Basketball season, it's not too late!

Parents are encouraged to come by City Hall at 617 Tenaha Street to sign up before November 4th. Office hours are Monday – Friday 8:30-4:30pm. After November 4th, there will be a $15 late fee added to the registration. For more information contact Jason Mitchell, City of Center Recreational Director at 936-590-7196.

Parents: Please bring a copy of the Birth Certificate to Signups!

Parents: Please bring a copy of the Birth Certificate to Signups!

November 2, 2022 - Due to the potential for inclement weather in the area later this week, Tenaha ISD's athletic schedule has been adjusted as follows:

Thank you for your cooperation and support! Goooo TIGERS!

November 1, 2022 - Due to the forecasted thunderstorms in Brownsboro on Friday, we are moving the Friday night game to Thursday night in Brownsboro, TX at 7:00 p.m. The sub varsity games will be played on Wednesday night at the same time and same scheduled location. Our early release will now be on Thursday, so that we can get all of our supporting groups to the game in time. As a reminder, Thursday we will dismiss 3 hours earlier than normal.

Friday will be a normal school day now. 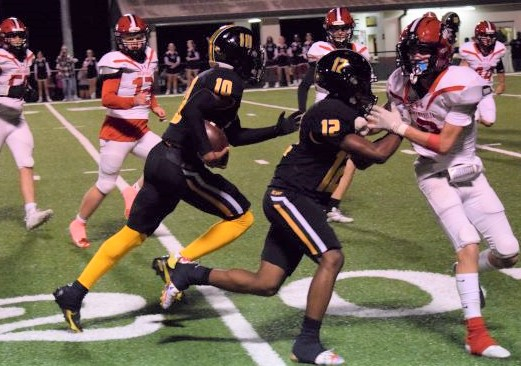 Four of five of Shelby County’s varsity football teams won this past week.

The Joaquin Rams are now 5-1 in District 11 2A-1 action this season. They beat the West Sabine Tigers by a 50-14 score on Thursday. They are now 7-2 overall. They will be off this week and await next week’s results to find out who their first-round playoff opponent is.

The Shelbyville Dragons 5-4, 2-3 will host the Tigers from West Sabine 3-6 2-3 at 7 p.m. on Thursday, November 3. Each team is fighting for the fourth seed in this year’s playoffs.

The Tenaha Tigers are now 4-5. They are 2-2 in District 11 2A-2 play. The Tigers beat the visiting Mount Enterprise Wildcat by a 56-6 score last Friday. They will travel to Overton on Thursday November 3 for a 7 p.m. kickoff at Mustangs Stadium. OHS is 2-7 overall and 1-3 in the conference. They lost 70-10 at Carlisle last Thursday.

Timpson Gets 67-14 District 11 Win over Shelbyville 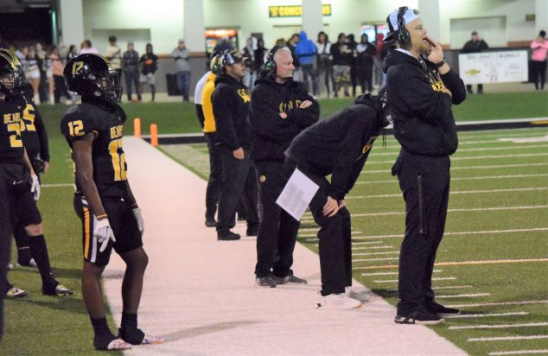 The Timpson Bears varsity football team improved their season record to 9-0 on Thursday with a convincing 67-14 home win over the Shelbyville Dragons. The Bears are now 5-0 in District 11 2A-1 conference action with one game left in the regular season. The Dragons fall to 2-3 in the conference and 5-4 overall.

The Bears jumped on top at the 8:09 minute mark of the first quarter when Vosky Howard scored on a 20-yard touchdown run. Terry Bussey added a 2-point conversion run to give THS an 8-0 advantage. The Bears extended their lead to 16-0 on a 49-yard scoring drive which saw Howard score on a 26-yard run. Bussey then pitched to LT Washington who ran in for a 2-point conversion.

With 7:48 left in the second quarter the Bears went on a 73-yard scoring drive capped by a 1-yard keeper run for a touchdown by Bussey. Howard added another conversion run to give THS an 24-0 advantage. Disaster struck for Shelbyville on the ensuing kickoff as Bear Amare Bruton covered a botched Dragons kickoff return giving the Bears possession again with 7:40 left in the second frame. Moments later Bussey bolted 35-yards for another Bears score. He then hit Howard for another conversion which gave Timpson a 32-0 lead.

Shelbyville fought hard to get back in the game and drove 61 yards to the Timpson 2-yardline but they turned the ball over on an unconverted fourth down scoring attempt. Bussey took the snap 98 yards for a score with no time remaining on the first half play clock. Bussey hit Bruton for the 2-point conversion and the two teams went into the lockerroom at the midway break with the Bears holding a 40-0 point advantage.

A 35-yard touchdown run by Bear JJ Garner and a 53-yard punt return for a score by Bussey helped THS take a 54-0 lead by the end of the third quarter.

With 7:30 left in the fourth stanza Timpson reserve quarterback LT Washington hit Howard for a score that extended the Bears lead to 60-0.

The Dragons got their first score when Benny Smith scored on a run for a 7-yard touchdown with 4:29 left in the contest. Tim Mason added and extra point kick to cut the THS lead to 60-7.

Bear Colton Carroll answered back with a Bear’s score on a 70-yard run just 20 seconds later. A LT Washington extra point kick put the Timpson lead at 60-7 with 4:09 left in the contest.

The Dragons scored last when Franydric Buckley scored on a 30-yard reception with two minutes left in the game and Mason added an extra point kick to put the final score at Timpson 67 Bears 14.

The Timpson Bears will travel to Garrison next Friday, November 4 for a 7 p.m. kickoff at Bulldogs Stadium. GHS is 7-2, 4-1 and won at San Augustine Thursday by a 40-14 score.

The Shelbyville Dragons 5-4, 2-3 will host the Tigers from West Sabine 3-6, 2-3 at 7 p.m. on Friday, November 4. Each team is fighting for the district's fourth seed in this year’s playoffs.

October 27, 2022 - The Shelbyville Volleyball team will compete in the playoffs against Beckville in Gary at 7pm on Monday, October 31, 2022. The dragons are visitors and admission is $5 and $3. District, senior, and coach passes are accepted. 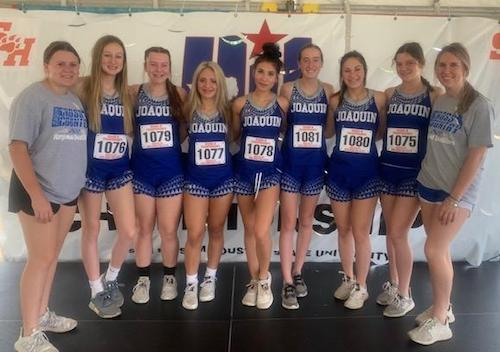 October 27, 2022 - The Joaquin Lady Rams competed at the 2022 Region 3 Cross Country Meet on Monday, October 24th in Huntsville Texas. The Lady Rams were representing District 23 as the 2nd place Team. The girls worked hard and represented well. The Lady Rams had a successful season and we look forward to competing in 2023.

October 26, 2022 - On Monday October 21st, the Lady Dragons and Dragons competed in the Regional Cross Country meet in Huntsville, TX. Up first, the Lady Dragons ran a great race with Emily Pharris finishing second place overall. The team came up short missing the state race by 2 team places. Emily has shown up and worked extremely hard for us everyday! We are extremely proud of her and this accomplishment. The following race were the boys who competed well. Jodavian Mathis led for the Dragons finishing the race 8th in all and qualifying for the state Meet. We are also very proud of him and his accomplishments. We will be taking these runners to Round Rock, TX on Thursday November 3rd to compete at the state Cross Country Meet on Friday November 4th. Emily will be running at 11:40am. While Jodavian will follow at 12:10 pm. These races will take place at The Old Settlers Park in Round Rock, TX. Congratulations to both Emily and Jodavian on this huge accomplishment!