The Shelbyville Lady Dragons gained a 15-5 lead by the end of the first quarter of Friday's District 23 2A Varsity basketball game with the Joaquin Lady Rams. By halftime the Lady Dragons led 31-12. Joaquin got two 3-pointers from guard JJ Bass and outpaced Shelbyville 17-10 points during the third period to cut the SHS lead to 41-29 going into the final quarter of play.

Shelbyville picked up the pace in the final stanza and took a 59-45 win at the end of the day. This win moved Shelbyville's season mark to 7-2 and their conference record is now 1-1. They got 24 points from Kiouja Gates, 19 from Kiana Bennett and 11 from Brooke Elliott. They will host the Martinsville Lady Pirates on Saturday, January 2, 2020 at 7 p.m. at Dragons Gymnasium.

Joaquin's conference mark stands at 0-1. JJ Bass led the Lady Rams with 17 points and Kalie Brooks was also in double digits with an 11 point outing. Joaquin will next host Brookeland High School on Tuesday, December 22, 2020 at noon in Joaquin Rams Gymansium.

December 18, 2020 - Today, December 18th, Joaquin Varsity Boys will host Broaddus at 4pm and the Lady Rams will host Shelbyville at 5:30pm. Come out and support our kids! Tickets will be sold at the gate.

Saturday, December 19th, Varsity boys will travel to Brook Hill. Game start time is set for 11:45am. Tickets will be sold at the gate, and we are limited to 40 fans.

On Monday, December 21st, the Lady Rams will host Jacksonville. The JV girls will start at 11am with the Varsity Girls following. 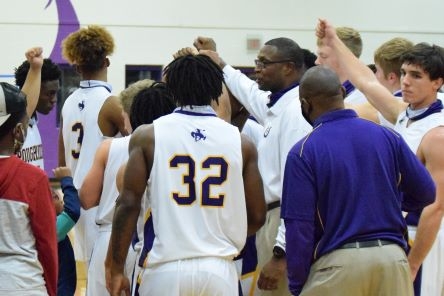 After trailing by as much as 15 points during Monday’s pre-conference varsity basketball game the Roughriders made a come-back effort late in the third period. Marquez Hall sank a free throw with 50 seconds remaining and Trecavian Hoyt hit a 3-pointer near the buzzer which sent the game into the fourth quarter with Kilgore still leading but only by eight points with a 39-31 score.

The fourth quarter saw the ‘Riders pull to as close as one single point of Kilgore’s Bulldogs but when the dust settled the Bulldogs had never gave up the lead and they ultimately came away with the 51-43 win.

The Roughriders will travel to Tyler Chapel Hill on Friday, December 18, 2020, for a 7:30 p.m. tipoff at Bulldogs Gymnasium.

December 12, 2020 - Tigers’ afternoon game today with Tarkington is cancelled due to Tarkington monitoring close contacts and exposure to COVID-19.

The Timpson Bears best-ever varsity football season came to an end in the Class 2A Division I state semifinals on Thursday night at Randall Reed Stadium in New Caney. The Bears came into the game as the #4 seed and they lost to the #1 Shiner Comanches by a 49-7 margin.

Timpson finishes the year 14-1. This was the best ever season for the Bears football program.

The Bears could not get a stop during Shiner’s opening drive as the Comanches moved the ball 67 yards on their opening drive which resulted in a 15-yard touchdown run by Doug Brooks. The Comanches led 7-0 with 6:42 remaining in the first quarter.

The Bears turned the ball over on downs after taking over at the 50-yard line when Braden Courtney returned the kickoff to midfield. The Comanches made the Bears pay as they scored again with 2:16 left in the opening stanza on a 26-yard touchdown scamper by Dakota Watts.

The second quarter saw SHS build their lead to 35-0 and by the 5:08 mark of the third period the Comanches had built their advantage to 42-0.

Late in the third frame the Bears were able to drive the ball. After an earlier touchdown run by Braden Courtney was called back, LT Washington was able to hit Shaheed Cross for a 20-yard touchdown reception. This cut the SHS lead to 42-7 very near the end of the third quarter.

The final score of the contest came when Dalton Brooks scored on a 30-yard run to give Shiner the final 49-7 advantage.

Coach Kerry Therwhanger stated after the game “It’s been a great ride with a great group of kids and coaches. I tip my hat to Shiner they played better tonight. I was proud our kids never gave up. They showed character to come out and battle.”

Shiner will go on to play Post High School next Thursday, December 17th for the 2A DI state championship at Arlington’s AT&T Stadium. The Antelopes are 15-0 and they are looking for their fifth state football championship win in school history. 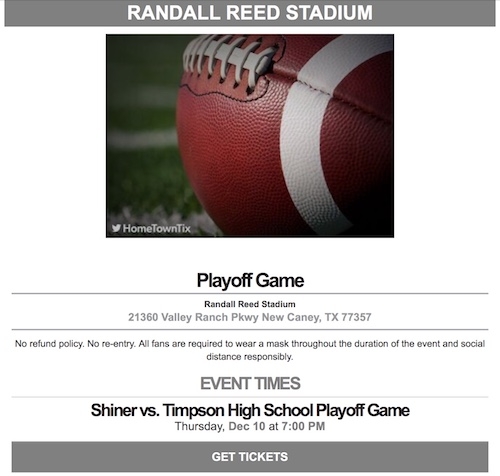 Timpson visitor general admission tickets go on sale Monday, December 7 at 12:01am. Link to ticket page - https://www.newcaneyisd.org/Page/11663 and once on page, click the [View Events by School] box and select 'Randall Reed Stadium.' The playoff games will be listed and you will see the 'Shiner vs. Timpson High School Playoff Game.' 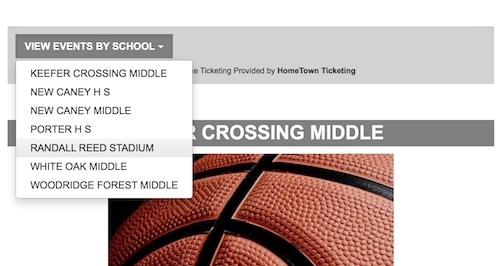 No refund policy. No re-entry. All fans are required to wear a mask throughout the duration of the event and social distance responsibly.

Randall Reed Stadium is located at 21360 Valley Ranch Pkwy, New Caney, Texas 77357 which is just over a 2 hours drive from Timpson.

Executive Order GA-29​, regarding face coverings, applies to all UIL activities effective July 3, 2020. This includes the 2020-2021 school year. As the public health situation changes, and/or if subsequent Executive Orders are issued by Governor Greg Abbott, these guidelines may be further modified.

Exceptions to the wearing of face coverings or face shields include: