In varsity action the Lady Roughriders led at the end of the first quarter by an 8-5 score. Carthage was able to outscore Center 12-4 during the second stanza and they led 17-12 at the midway break.

Carthage stretched their lead to eight points in the third frame and they led 31-23 going into the fourth quarter. The Lady Bulldogs were able to outscore the Lady ‘Riders 11-4 in the final period as they took the win by a 42-27 final score. The Lady Roughriders are now 2-1 in conference play and they are at 5-12 for a season mark.

The boys varsity game was close early. Center trailed 23-21 points at the buzzer ending the first quarter. They fell behind 39-36 by halftime. Center outscored the Carthage Bulldogs 49-35 in the second half however to earn a 70-58 district win. The ‘Riders are now 1-1 in conference play and they have a 14-8 overall standing.

Center will travel to face the Hudson Hornets on Friday, January 21, 2022 where JV will tip off at 4:30 p.m. and varsity action will follow. 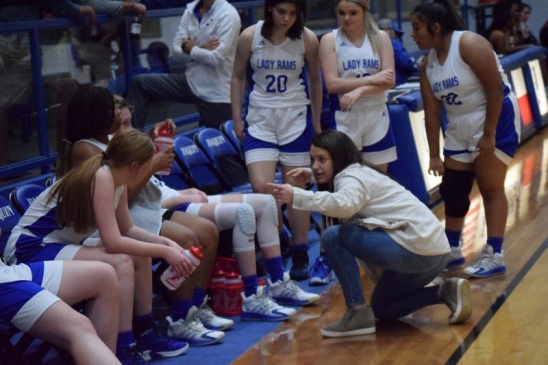 On Friday Tenaha High School travelled to Joaquin to face off in District 23 Class 2A girls and boys basketball games.

The Tenaha Lady Tigers varsity never trailed the Joaquin Lady Rams as they jumped out to an early 26-0 lead over JHS by the end of the first quarter. THS led 34-6 at the midway break. Tenaha outpaced Joaquin 15-10 points during the third frame and they led them 49-16 going into the final period. The Lady Tigers eventually took a 53-30 conference win.

The Tenaha Tigers boys team also led throughout their game but this game was much closer. THS led 14-7 after the opening stanza. 32-16 at halftime and 53-33 after three quarters. The Tigers won the game by a 67-51 score.

The girls Junior Varsity contest between these two schools proved to be the closest game of the night. The contest went into tie-breaker mode after the teams ended regulation play tied at 17 points apiece. Tenaha eventually took the win by a single point. Joaquin alumni Katelyn Martinez was spotted coaching her former team.

The Center Lady Roughriders varsity basketball team improved their District 17 4A record to 2-0 with a 41-33 home win over the Jasper Lady Bulldogs on Tuesday.

The Lady ‘Riders started slow and trailed Jasper 6-7 points at the end of the first period. Senior guard Kiddra Harper hit a 3-pointer late in the second period which helped CHS to take a narrow 18-17 lead into the lockerroom at the midway intermission.

Center outpaced Jasper 10-8 points during the third stanza and they took a 28-25 lead into the fourth period. CHS was able to outpace Jasper 13-8 points in the final frame to take the win. Sophomore May Johnson led Center with 11 points. Jakayla Brown led Jasper with 12.

The Lady ‘Riders now are 5-10 overall this season. They will travel to Palestine on Friday, January 14, 2022. Junior Varsity will tip off at 5 p.m. and varsity play will follow.

Janaury 10, 2022 - This past Friday, the Center Lady Rider's varsity basketball team opened the district with a 39-29 win over Rusk.

During the game, Mahalia Ratcliff (Sr.) paced with 13 points and Gabby Whisenant (Sr.) was seconded in points with 9 followed by May Johnson (Soph.) with 8.

On Tuesday, January 11th, varsity and junior varsity will play Jasper at home with games starting at 5pm. To view the Girls Basketball schedule, click here.

January 10, 2021 - The Center Roughrider girls soccer team kicked off their 2022 season last week with two victories in non district games. Center won against Crockett on Tuesday, January 4th with a final score of 7-0. Center got their second win on Friday, January 7 with a score of 12-0 against Diboll.

The team will take to the field tomorrow, January 11 against Cumberland Academy at home with a game time of 5pm. The team is lead by Head Coach Madison Holyfield, Assistant Coach Jordan LaTrache, Woman's Athletic Director Sara Rupp, and Athletic Director Ricky Meeks.

The Center Lady Roughriders took a 39-29 win over the visiting Rusk Lady Eagles on Friday during a District 17 4A conference game. The Lady ‘Riders defense started out strong and only allowed Rusk a single point during the first period. Center took an 8-1 advantage into the second quarter.

Rusk scored 11 points during the second stanza and CHS held a 18-12 lead at the midway intermission.

The Lady Eagles clawed their way back into the contest and cut the Lady Roughriders lead to five points at 26-21 going into the fourth quarter.

CHS was able to outpace Rusk 13-8 points in the final frame to take the ten-point win. Mahalia Ratcliff led the Lady 'Riders scoring with 14 points.

Coach Corey Loverson’s staff, and the Lady Roughriders, will prepare to host the Jasper Lady Bulldogs next Tuesday, January 11, 2022 in their second district matchup. Junior varsity will tip off at 5 p.m. and varsity play will follow.

Come watch a ton of great golfers compete for big $$$! There will also be food and snack vendors on site, so come watch and enjoy.

Spectators are asked to remain quiet during all play and to have their phones off or on silent during any of the disc throws. Spectators should always walk behind the players and out of line of throw and not advance until the last player in the group throws for the basket.

Parking will be outside of the Park only. This is a Professional C-Tier PDGA tournament. Miles Seaborn is the director. First throw will start between 8-8:30am Saturday morning.

January 5, 2022 - The Timpson Bears will start their baseball season with a scrimmage against Arp at home on February 8, 2022 at 5pm. To see the full 2022 Timpson Varsity Baseball schedule, click here.