September 8, 2022 - The Center Roughrider Varsity team match against Kilgore has been moved to 4pm on Monday, September 12 in Center.

The Junior Varsity tennis team has added a match to their schedule. They will host Hudson at home on Thursday, September 22.

On Saturday, September 3, 2022 the Riders hosted Henderson and swept the Lions 19-0 officially and 26-1 with all extra matches played.

Tuesday, September 6 competing against District opponent Pineywoods Academy, the Riders kept the momentum going with a clean sweep of all the matches 20-0.

In upcoming matches, Center will travel to Lindale on Saturday, September 10 and then play host to Kilgore at 4pm on Monday, September 12. Go Riders!!!!

September 6, 2022 - Elysian Fields has an ONLINE TICKETS ONLY ticket platform. They do not accept cash! Use the following link to purchase a ticket for Friday's game - Shelbyville Dragons versus Elysian Fields Jackets.

The Center Roughriders moved their record to 2-0 with a convincing 63-6 home win over the Spring Hill Panthers. Center will host the North Desoto Griffins on Friday, September 9, 2022 at 7:30 p.m. The Griffins have no posted scores.

The Joaquin Rams fell to the Beckville Bearcats by a 42-41 score at Bearcats Stadium. The Rams are now 1-1 and will host the Tenaha Tigers next Saturday, September 10, 2022 at 7 p.m., at Rams Stadium for Joaquin’s 2022 Homecoming. Tenaha is 2-0 after pulling off a 12-6 overtime road win over the San Augustine Wolves.

The Shelbyville Dragons are now 1-1 as they fell at home to the Hemphill Hornets by a 61-12 score. The Dragons will regroup and head to Elysian Fields High School on Friday, September 9, for a 7:00 p.m. kickoff at Yellowjackets Stadium. The Yellowjackets are 0-2 after falling to visiting Dekalb 44-12.

The Timpson Bears improved to 2-0 with a 52-29 road win over the Jefferson Bulldogs. The Bears head to Daingerfield on Friday, September 9 for a 7 p.m. kickoff at Tigers Stadium. Daingerfield is 2-0 after beating visiting Tatum 48-35. 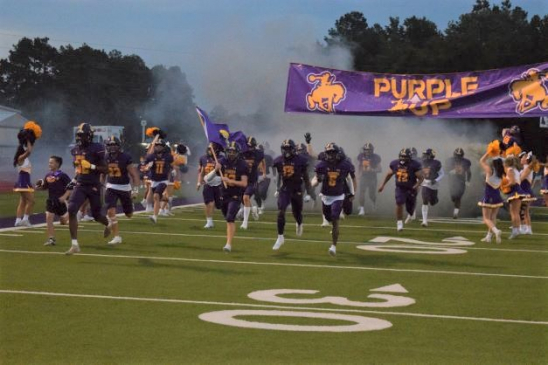 The Roughriders took a convincing 63-6 win over the Spring Hill Panthers varsity football team at Roughriders Stadium on Friday. Center got on the scoreboard first, at the 5:51 mark of the opening quarter, on a 22-yard touchdown pass from Emonte Cash Cross to Chris MarMar Evans. Kaden Dixon found the endzone for a 2-point conversion and Center led 8-0.

Center extended their lead to 14-0 with 2:24 left in the opening quarter on an 11-yard touchdown run by Dixon. The ‘Riders try for two points failed.

During the second quarter Cross threw three touchdown strikes to each: Evans, Jake Morris and Da’nijhalon Gipson as Center took control with a 42-0 lead at the halftime intermission. A fumble recovery and a blocked punt helped to keep the Panthers at bay as well. Carlos Hernandez also kicked seven for seven extra points on the night and was able to kick three kickoffs deep enough during the game to not have a return attempt, giving SHHS a long field on drives.

The Roughriders extended their lead in the third frame with a 44-yard scoring run by Cross and a 32-yard touchdown sprint by Dixon. Cross also connected on a 35-yard touchdown pass to Tucker Scarber with 8:56 in the fourth. This boosted the Roughrider’s lead to 63-0.

The Panthers got on the board when Zane Mason scored on a 1-yard run with 2:45 left in the game. The extra point attempt was blocked to eventually put the final score at 63-6.

Cash Cross completed 8 passes on 14 attempts for 317 yards and 5 touchdowns. He rushed six times for 68 yards and a score. Eric Allen led the defense with 10 solo tackles and 5 assisted and he recovered a fumble.

Center next plays host to North DeSoto High, from Louisiana, on Friday, September 9, 2022, at Roughriders Stadium. Kickoff will be 7:30 p.m. The ‘Riders will be trying to win their third game in a row which they haven’t done since 2019. 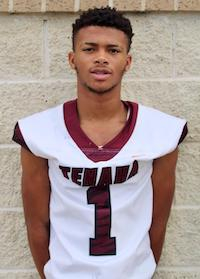 September 2, 2022 - Tenaha's junior quarterback Ja’Tyrian Moore was selected as the Class 2A, week 1, 2022 Built Ford Tough High School Football Player of the Week! Read the press release below where Moore's playing accomplishments are highlighted from Tenaha's game against West Sabine.

Plano, Texas – Once again, Ford and Texas Ford Dealers are recognizing the very best high school football stars in Texas in week one of the 2022 Built Ford Tough Texas High School Football Player of the Week program. Since 2006, the program has recognized outstanding student-athletes throughout the regular season. For 17 years now, the program has celebrated many future college and professional standouts during their Texas high school football careers.

This week’s winning athletes join a long list of remarkable players recognized for their exceptional efforts.

As the son of Stratford coach Todd Rankin, Nash has had all eyes on him since he was an eighth-grader. He has made his own way, establishing himself as a starter and twice earning District 17-6A all-academic honors. In a 46-28 season-opening win over Tomball, Nash completed 17 of 20 with no interceptions for 390 yards and six touchdowns.

“He is a tremendous leader with a work ethic that carries over into practice and game preparation. He’s a cool character who gets the ball to the right people. He has done a good job handling the pressure.” Stratford Head Coach Todd Rankin

Demonte Greene was simply the best player on the field in Carrollton Newman Smith’s season-opening 43-42 win over Denton. Fortunately for the Trojans, Greene never left the field. As receiver, the senior racked up 10 catches for 153 yards and two touchdowns, including the go-ahead 63-yard score early in the 4th quarter. On defense, Greene came down with three interceptions, including a pick-six.

“The thing that stood out the most was his willingness to help the team in any way we needed him. He is obviously our number one Wide Receiver, and he did an outstanding job. Defensively, we needed him, and he jumped in and took over the game. He was a part of all special teams play. He makes a significant difference any time he is on the field.” Newman Smith Head Coach Robert Boone

Salado's Luke Law opened the Tom Westerberg Era with an outstanding performance in a 53-17 victory against Fredericksburg. It is even more impressive considering dramatic change in the offensive philosophy from the well-oiled Slot-T under former head coach Alan Haire who is now at Chaparral High School in Killeen. Law finished the season-opening win completing 15-25 passes for 380-yards and 5-TD's.

"Luke has done an outstanding job in learning the offense and leading our team. He has all the qualities that you look for in playing the QB position, leadership, character and work ethic!" Salado Head Coach Tom Westerberg

J.J. Acosta entered the 2022 season as a key component for Taft, but his performance against Skidmore-Tynan helped to cement him into the school’s football program lore. Acosta, who was the Corpus Christi Caller-Times All-South Texas Newcomer of the Year in 2021, threw for a school record 515 yards and was highly accurate doing it in a 47-13 victory against the Bobcats. Acosta completed 30 of 38 passes and connected for five touchdowns, including four to receiver Josh Suarez.

Acosta’s start to the season was an encore to throwing for 2,396 yards and 26 touchdowns as a sophomore for the Greyhounds. Plus, Acosta is ranked in the top 10 percent overall in his class and is a team captain.

“I think it is just the experience overall coming in from last year. Being that newcomer of the year in South Texas and the overall experience in his composure was a lot different than it was last year. He seemed more relaxed in the position. When you throw for that many yards there is a lot of players, especially the offensive line and some of the receivers. It was a combination of receivers catching the ball and line being able to protect. He does everything right in the classroom. He is the first guy here for workouts and the last guy to leave. JJ is really involved with the community and involved with the church he attends. He is an A-plus elite status student-athlete overall.” Taft Head Coach Joe Castellano

Tenaha QB Ja’Tyrian Moore scored on a 65-yard run on the first play from scrimmage and did major damage on offense and defense the rest of the game to help lead his team to a 50-38 win over West Sabine. Moore finished the night with 16 carries for 402 yards and six touchdowns while completing 4 of 8 passes for 44 yards and a TD. Defensively, he finished with eight tackles, an interception and a pass breakup and he also returned a pair of kicks for 45 yards.

“Ja’Tyrian had been a starting receiver the previous two seasons, so for him to put up numbers in his first varsity start at quarterback was pretty incredible. We did not realize he had so many yards until after the game, but that run to open the game set the tempo.” Tenaha Head Coach Terry Ward

Dallas Parish Episcopal kicked off their season with one of their biggest wins as the Panthers defeated the state ranked Aledo Bearcats 24-17. The game came down to a handful of crucial plays made by senior safety Daniel Demery who was instrumental in stopping several key drives and ensuring a victory for the Panthers. Demery finished with 7 tackles, 2 interceptions, one forced fumble and a key pass break-up. However, the stats do not tell the real story as Demery was in on every key play. He forced a fumble on 4th and 1 from the 1. He ended 2 potential scoring drives with interceptions. He had a key pass break up towards the end of the game that protected the 7-point win.

“He has been a starter for four years and a caption for two. In the biggest game of our time together vs. perennial power Aledo. He came up huge. I like to think when we needed him the most, he gave us his best! Without him we would not have beat Aledo, I know that for sure.” Dallas Parish Episcopal Head Coach Daniel Novakov

Nominate your elite student-athlete at FordPlayeroftheWeek.com

During each week of the 2022 regular season, fans, coaches, and media are asked to nominate players at FordPlayeroftheWeek.com, as well as catch up with winners, view video clips of players in action and get the latest program details. Fans will be able to follow the conversation on social media by using #FordPOTW and share the recognition of these outstanding individuals each week.

Additionally, fans are encouraged to catch all the action on Bally Sports Southwest. The network is teaming with Ford and Texas Ford dealers to keep honor award winners through its weekly television show. Each week, television crews will travel to communities across Texas, spotlighting players who excel on the field, in the classroom and in their communities. The half-hour Built Ford Tough Texas High School Football Player of the Week program will air on Fridays and Saturdays at 8:00AM.

How the program works
The Built Ford Tough Texas High School Football Player of the Week program recognizes one high school student-athlete in six of the state’s athletic classifications each week of the regular season.

Nominees must excel in three categories:

At the end of the regular season, Ford and its advisory board will select one student-athlete from the 11 weekly winners to be the Built Ford Tough Texas High School Football Player of the Year in each classification. Following the championship games, honorees will be recognized at a banquet next year.

September 1, 2022 - Center Varsity tennis team wins 13-6 over Lufkin when the two teams met in Lufkin on August 30, 2022. Great start leading 5-2 after doubles and gave the Riders momentum going into singles. Out of 12 singles matches, the team would win 8 with the Lady Riders leading the way completing a clean sweep again.

Varsity Tennis will host Henderson starting at 9am, Saturday, September 3, 2022. Junior Varsity's played in Henderson September 1st and their next tournament will be on September 8th.

Official match score was 13-6, and overall was 19-8 with extra matches played.

August 30, 2022 - The JH Football season starts on September 8, 2022 for the Tenaha Tigers at home in a game against Joaquin at 5pm. JV will face San Augustine Wolves in an away game on September 1 at 5pm. To see the full schedule of JH and JV click here.