The Timpson Lady Bears varsity basketball team fell to the Union Grove Lady Lions by a very close 43-41 score. The game was played at New Summerfield Hornets Gymnasium, a neutral site and was a UIL Regional Quarterfinal Round Elimination game.

The game was close throughout the contest with Timpson leading 9-7 midway through the first quarter. THS trailed UGHS 15-13 at the conclusion of the first period. The Lady Lions held a 33-31 advantage at the end of the third stanza.

Timpson finished the season with a 25-5 win-loss record and represented the first seed of District 21 2A. The Lady Bears were led by Claire Johnson with 11 points and Johna Cruse with 10.

Union Grove moves on with a 21-4 record representing District 23 2A. They were led by Macey Alston with 22 points.

Roughrider Basketball Round 2 of State Playoffs

February 24, 2021 - Tonight, The Roughrider Broadcast Team presents Round 2 of the State Playoffs, brought to you by Sabine State Bank. The Riders will travel to Coriscan to play the Austin LBJ Leopards. Center defeated China Spring in Round 1 on Saturday, setting up a rare Wednesday, February 24th match-up for Round 2. Tip off is 7:30pm.

The Ray Jones Chevrolet Pre-Game Show begins at 7:10pm. The Broadcast Team sets the table for Round 2 featuring a visit with Coach Munoz, then they sit down with Rider senior Jake Liker.

As the game concludes, we'll talk to the Ford Tough Player of the Game during the Farmers State Bank Postgame Show.

Find the live stream on Twitch.TV at the roughridersports page.

Tickets are $5 each and all fans must have a pass that is only available at the TISD high school or Administration office in order to be able to pay at the gate. We are limited to 225 total passes and once the players are able to accommodate their family pass request, the balance of passes will be made available. Probably around 1:30 today.

The Tenaha Lady Tigers Varsity Basketball Team saw their season come to an end after a 61-49 point loss to the Douglass Indians. The Area Playoff game was played at Cushing High School a neutral location.

Douglass gained an early 11-8 point lead midway through the first quarter and led 18-12 going into the second period. They held a 32-26 advantage over THS at the midway point.

Tenaha battled to catch up but Douglass junior post Mariah Neal got hot and helped DHS move out to a 49-39 lead by the end of the third stanza. Neal led all scorers with 35 points for the day. Teammate Josie Watson scored 18 points for Douglass.

Tenaha finished the season with a 15-5 overall record.

Douglass stands at 24-0 and will now face Hawkins in the quarterfinals of the UIL Basketball Playoffs at a time and location to be decided later.

They will be practicing after school Wednesday and Thursday before the Friday tournament.

Tigers Bi-District Playoff vs Broaddus is scheduled for 6pm Tuesday, February 23 in Wells. 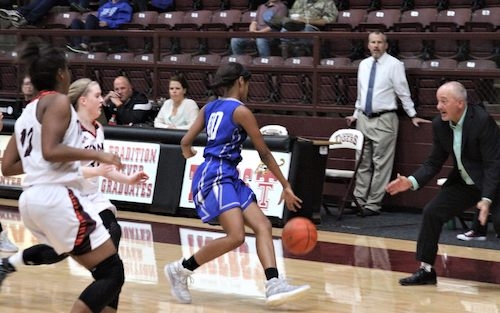 Coach Davison is on the right. Photo by Ronny and Rhonda Samford.

February 16, 2021 - Tenaha ISD congratulates Coach Garry Davison for being named to the University Interscholastic League's list of the 100 Greatest Girls Basketball Coaches in the history of the state of Texas High School Basketball.  In Davison's eight years at Tenaha, he has taken the Lady Tigers to four Regional Tournaments, three Region Finals and has a state ranked District Championship team entering this year's playoffs. 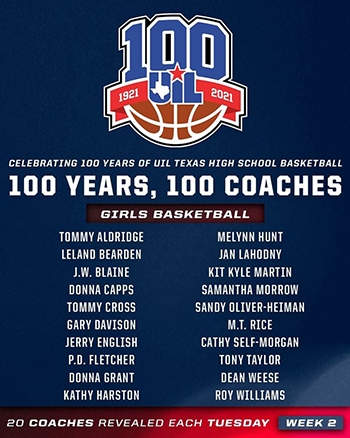 The Shelbyville Dragons Boys varsity basketball team won their final District 23 2A game of the year over the hometown Joaquin Rams by a 61-34 score.

The Dragons gained a6-2 lead by the midway point of the first period and led 20-10 at the buzzer which sent the game into the second quarter. The Dragons led 29-21 at the midway intermission.

Shelbyville was able to outpace Joaquin 21-6 during the third stanza and they took a 50-27 lead into the final period.

Dragon LD Coleman led all scorers this game with 20 points.

This game concluded the Rams season. The Dragons boasted a 7-5 conference record and will enter the playoffs as the district’s fourth seed. Playoff details will be made next week.

Tenaha jumped out to a 9-2 point lead by the midway point of the opening period and led 15-6 going into the second quarter. THS held a 26-16 advantage at the halftime intermission.

By the end of the third stanza Tenaha had boosted their lead to 20 points with a 40-20 lead.

West Sabine was led scoring by Princess Hutchinson with 15 points.

The Lady Tigers will next face the winner of the Douglass versus Overton game, being played this Friday, to find out who their next opponent will be.

Besides this win, Tenaha Head Coach Gary Davison is having a great week as he was recognized as one of the 20 coaches this week to be acknowleged in the University Interscholastic League's 100th Years Celebration. 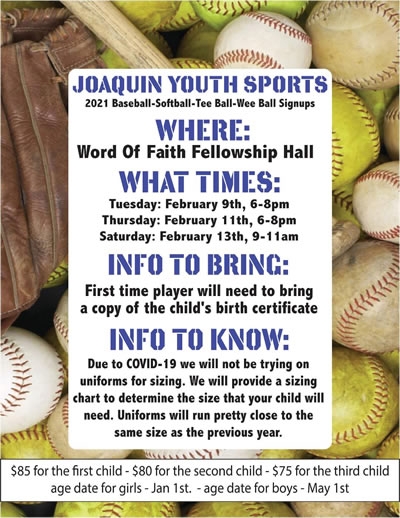