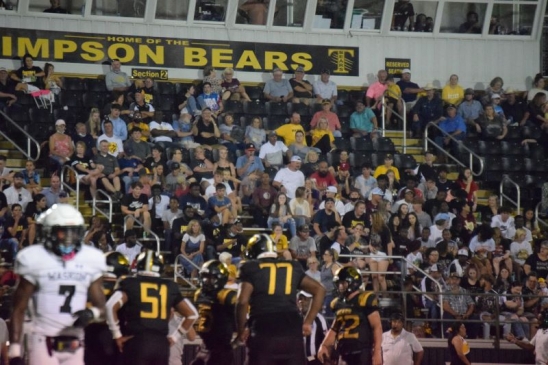 The Center Roughriders fell at home to the Jefferson Bulldogs by a 25-14 score. The Roughriders now boast a 0-2 win-loss record this season. Center will head out to Gladewater on Friday, September 10, 2021 for a 7:30 p.m. kickoff at Bears Stadium. Gladewater is 0-1 and fell to the Gilmer Buckeyes by a 42-14 score at Gilmer last week.

The Joaquin Rams suffered a tough 29-14 loss on the road last week against the Elysian Fields Yellowjackets. Joaquin is at 0-2 and will host the Groveton Indians on Friday, September 10 at 7:30 p.m. Groveton is 0-1 and lost last week to the Grapeland Sandies by a 51-30 score at Sandies Stadium.

The Shelbyville Dragons busted into the win column with a 51-14 home win over the Huntington Red Devils. The Dragons are 1-1 and will head to Waskom Wildcats Stadium on Friday for a 7:30 p.m. showdown with the 1-1 Wildcats. Waskom fell to Timpson last week 49-28.

The Tenaha Tigers are 2-0 after defeating the Arp Tigers in a road win last Friday. Tenaha will host the Brook Hill Guard on Friday September 10, at 7 p.m. in Raymond Jackson Stadium. Brook Hill is 1-1 and lost a road game at Spring Hill by a 28-25 score last week.

The Timpson Bears defeated the #4 Class 3A Waskom Wildcats last Friday by a 49-28 score at John Herbert Eakin Stadium. The Bears now stand at 2-0 this season.

Friday saw a rescheduled non-district varsity football game between No. 3 Class 2A Timpson Bears and the No. 4 Class 3A Waskom Wildcats at Timpson’s John Herbert Eakin Stadium.

This game was hard-fought and close in the early stages but the Bears took over in the second half to defeat the Wildcats by a 49-28 score.

Timpson originally was slated to take on the Alto Yellowjackets. The Wildcats were set to play Brookshire Royal on Saturday. However, the COVID-19 pandemic changed plans leading to the scheduling changes.

Waskom went up by a 7-0 score on a 35-yard quarterback keeper run by sophomore quarterback Cole Watson with 8:24 left in the first quarter, and Ezequiel Ruiz added an extra point kick.

Waskom bounced back with a 71-yard drive of their own capped off by a five-yard score by Watson on another keeper. An extra point gave the Wildcats a 14-7 lead with 5:13 remaining in the opening stanza.

In the second quarter, Bussey connected with Howard again for another touchdown, this time from 50 yards out, to tie the game at 14-14 with 6:50 left in the first half.

Moments after Waskom answered with an ensuing kickoff run for a 73-yard touchdown return by senior Zay Thomas which gave Waskom a 21-14 lead with 6:34 remaining in the second quarter.

In the final second of the first half, Bussey scored on a keeper and capped off a 14-play, 50-yard drive to pull the Bears to within one point of the Wildcats. A missed extra point sent the teams into the locker room with Waskom ahead leading 21-20.

Bear runningback Braden Courtney fumbled the second half kickoff and Waskom wasted no time scoring. Carson Gonzalez pulled down a pass from Watson for a 48-yard touchdown pass to increase the Wildcats lead to 28-20 with 11:40 still left in the third frame.

Courtney bounced back by taking a screen pass for an 18-yard touchdown with 7:59 left in the third quarter. A missed two-point conversion attempt kept Waskom’s lead at 28-26.

The Bears defense held for the remainder of the second half while they scored 23 unanswered points. Bussey scored twice on two quarterback scrambles and Courtney went in from 1-yard out with 6:18 left in the contest.Timpson now stands at 2-0 this season. 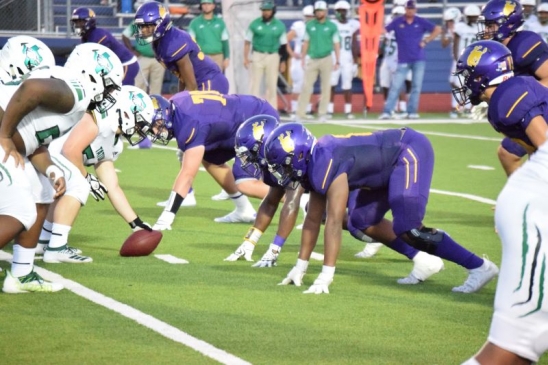 The Center Roughriders (0-1) fell at home to the Tatum Eagles by a 68-26 score in their season opener. This week the Roughriders will host the Jefferson Bulldogs for Center’s homecoming game. Jefferson defeated visiting Pittsburg High School by a 15-12 score. Jefferson has an early 1-0 season win-loss record. Kickoff at Roughriders Stadium is on Friday, September 3, 2021 at 7:30 p.m.

The Joaquin Rams fell in their season opener to the visiting Beckville Bearcats by a 50-39 score. The Rams’ record is at 0-1. They will travel to Elysian Fields for a 7:30 p.m. kickoff on Friday, September 3 at Yellowjackets Stadium. The Yellowjackets lost to Harmony by a 25-14 score.

The Tenaha Tigers (1-0) defeated the Honey Grove Warriors by a 35-0 score at Tenaha. The Tigers travel to Arp on Friday September 3, for a 7 p.m. kickoff at Arp Tigers Stadium. Arp defeated the Huntington Red Devils by a 47-21 score.

The Timpson Bears (1-0) defeated the Frankston Indians, at Frankston by a 61-0 score. Timpson hosts the (1-0) Waskom Wildcats on Friday, September 3, at 7:30 p.m. Alto cancelled their game with the Bears on this date due to a Covid outbreak. Waskom won at Garrison by a 45-0 score last week. Brookshire-Royal was originally scheduled to meet up with the Wildcats but also needed to cancel due to a Covid outbreak. This game will be the East Texas Game of the Week.

September 1, 2021 - The Center Lady Rider Volleyball team played Tuesday, August 31, and lost in four close sets to Timpson. Center lost their first set 20-25 but tied it up by taking the second set with a 25-16 score. However, Timpson came back to take the third set and fourth set for the overall win.

Next, the Lady Riders will travel away to compete in the Marshall Tournament on September 3 and 4. To view the CHS Volleyball Schedule, click here.

Scores for each set and stats for each player are listed below.

JV game at Huntington for Thursday September 2nd has been cancelled.

The Tenaha Tigers varsity football team wasted no time as they defeated the visiting Honey Grove Warriors by a 35-0 score. The Tigers covered 65 yards in two plays on a drive which was finished with a Jeremy Patton touchdown run with 11:36 still left to play in the first quarter. Tiger Manuel Laredo kicked the extra point to give THS a 7-0 advantage. The Warriors soon after turned the ball back over on downs. Tenaha fumbled after a short possession.

The Warriors next moved the ball on a 7-play drive but, on fourth down, Tenaha’s  Ja’Tyrian Moore took a punt 88 yards for the Tiger’s second touchdown of the game. Laredo again booted the point after to give THS a 14-0 lead.

Moore intercepted a Warriors pass near midfield which led to the Tigers getting a 3-yard touchdown run from Javare Brown with 3:35 still left in the first period. Tenaha gained a 21-0 advantage.

Markevion Rasberry scored, during the second stanza, on a 3-yard run with 9:20 left in the first half of play. Another extra point gave THS a 28-0 lead.

Moore scored on a 30-yard reception from Trindon Claiborne with 5:47 left in the second period. Laredo’s extra point kick proved to be the final point of the contest. Tenaha moved the ball effectively to protect the 35-0 lead throughout the second half of the contest.

Tenaha now stands at 1-0 for the season and they will next travel to Arp High School next Friday, September 3, 2021 for a 7:30 p.m. kickoff at Arp Tigers Stadium.

The visiting Tatum Eagles took an early 7-0 lead during the Center Roughriders varsity football home opener on Friday. A 35-yard scoring strike from Eagles quarterback Kendric Malone to Kendal Williams gave THS the lead with 5:13 left in the opening period. Tatum added another touchdown reception late in the fist quarter when Malone hit Remington O’Brien for a 9-yard score with just 24 seconds left in the first quarter.

A special team miscue by Center gave the Eagles a 21-0 lead when Jackson Richardson picked up a short punt and raced into the endzone early in the second period.

The Roughriders got on the scoreboard when Da’nijhalon Gipson raced 72 yards for a touchdown on the ensuing kickoff. An extra point kick by Carlos Hernandez helped cut the THS lead to 21-7 with 11:22 remaining in the second stanza.

Malone hit Jayden Boyd for another Tatum touchdown reception with 6:36 left in the first half and the Eagles gained a 28-7 advantage.

Center later cut the Eagle’s lead to 28-14 when sophomore quarterback Emonte Cross scored on a keeper run from 1 yard out to cap a 69-yard CHS scoring drive with just 37 seconds left in the first half.

Center’s regular season record stands at 0-1. They will host the Jefferson Bulldogs on Friday, September 3, 2021 for the Roughrider’s Homecoming with kickoff slated for 7:30 p.m.